Flight from Dhaka: An escape that isn’t

The cabin crew make the usual announcements before take-off, repeatedly asking passengers to switch off their phones. Yet dozens of hushed voices could be heard from every row, buying a few more seconds, reluctant to cut the connection. One last goodbye and assurances to loved ones. After all, who knows when they’d next be able to speak to their mothers and wives, children and friends? It would be a few days at least before they acquire a SIM card in a strange country. Maybe they’d borrow the phone from a stranger or newly-made acquaintance for a quick check-in.

It was late Thursday afternoon in Dhaka’s Hazrat Shahjalal airport. There are three flights scheduled for different cities in the GCC. All fully booked.

Jamal is on a flight headed to Doha, from where he would take a connecting flight to Taif in Saudi Arabia.

He is a veteran; seven years in Saudi, another five in UAE, and now back to Saudi again. 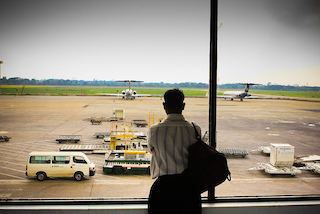 In the row diagonally behind him is an obvious first-timer. He struggles with the belt, but manages with the help of a compatriot across the aisle. He holds on tight to a green paper file with the agency’s name printed across in big bold script and a black pouch with his passport, visa copy and wallet. Even when dinner is served, he places his precious possessions on his lap, his left hand placed protectively over it, and not in the empty seat next to him. He spoons a piece of butter into his mouth, not knowing what it is, and screws up his face both in amusement and distaste. So begins a lifetime of new and strange experiences.

Jamal, on the other hand, looks anxious but not out of place. He has done this journey many times before. This time though he notices something different.

In Hindi, laced with Bengali, he comments, “There are so many Bangla women going, no?”

He seems worried, even a little disapproving. “You think free visa? Not good.” It may have been a patriarchal concern, or a reflection of the realities he’s faced in the Gulf. More likely some combination of the two.

Jamal himself is going on a ‘free visa’.

It isn’t really free is it?

His brother who works in Taif helped get him the visa. “The first two times I went with a contract and worked for a company. But it’s no use. You don’t get enough. With free visa you can make even 100,000 a month or nothing at all.”

He asks for a ‘Tiger’ and gets a can of Fosters instead. “Last time fun. No getting in Saudi,” he grins, switching to English.

Now he is funny, now he is worried, now he is curious about my life, but he is most worried about all the scared looking women headed to a strange land.

Bangladesh has been lobbying hard to open up Gulf labour markets for its citizens. A country facing a cocktail of problems, – climate change, overpopulation, extreme poverty, un- and underemployment – it’s eager to sign MoUs.  As with many sending countries, remittances comprise a significant percentage of the GDP (7.9%). In 2015-2016, nearly 60% of its USD14.93 billion remittances came from the Gulf countries.

But for the worker, the costs of migration have risen and wages haven’t kept pace.

The UAE is the second largest destination, with 1.2 million workers. However, it has stopped recruitment from Bangladesh in recent years – a decision that Bangladesh is trying hard to reverse. Bangladesh’s Overseas Employment Minister Nurul Islam has urged the country to hire more workers.

“The minimum wage for Bangladeshi migrants in Qatar is 700 Qatari Riyals but we proposed a minimum of 1,200 Riyals…”  Islam said.

The ban had not applied to female domestic workers, who total roughly 60,000 in the Kingdom. Bangladesh estimates there are 1.3 million Bangladeshi workers in KSA in total, though IOM statistics are more conservative (976,223). According to Bangladesh Ambassador to KSA Golam Moshi, on an average 6,000 new female domestic workers arrive in the country every month. The minimum wage is USD$200 compared to US$400 for Filipinos.

Bangladesh is impervious to the stark ground realities in the Kingdom;  ‘thanking the Saudi King’ for what it dubbed as a magnanimous decision, it ignored that Saudi's labour deficit means it's desperate to attract workers, especially as other sending countries critical of its migrant labour policies appear less willing to send workers. Bangladesh's gratitude also disregards Saudi's mismanaged economic crisis, which has left tens of thousands of workers stranded and destitute.

The decision to lift the ban followed a meeting between Saudi King Salman and Bangladeshi Prime Minister Sheikh Hasina in June 2016.

Supriya is a trainer with OKUP, a Dhaka-based NGO, and works with migrants in nine districts of Bangladesh. She and her team conduct pre-departure trainings, and also educates families of migrants.

However, the stereotypes surrounding female migrants hold strong. Jamal’s disapproval is but a mild reflection of what she counters daily in her work.

“A female migrant is not seen positively. And we have noticed that the ones in bad personal situations are the ones who choose to migrate. The divorced or widowed or those in bad marriages.  For many, it’s an escape to leave Bangladesh at all costs. So they withstand the stigma.”

That’s why her organisation works hard on pre-decision training, because once a potential migrant has made up their mind – which means paying huge sums of money to a middle man – they are no longer empowered. On an average, women pay USD1000 and men USD3000, to migrate.

The training Bangladesh government makes mandatory is only for language skills (30 days), and not any real cultural or rights-based orientation.

This is evident in the hundreds of women who end up ill-adjusted and vulnerable in countries that have little or no protective mechanisms for domestic workers.

So one wonders why the concerns of those like Jamal doesn’t echo loud enough in the corridors of power and decision-making.