Jasmine Shajahan doesn’t know whom to approach or what to do to bring back her mother from Saudi Arabia.

Her mother had gone as a domestic worker some three months ago through unofficial channels.

“Once in a while, she would call us. She is suffering from high blood cholesterol. I am afraid something bad will happen to her. I just want her to come back safely,” Jasmine told Migrants-Rights.org. 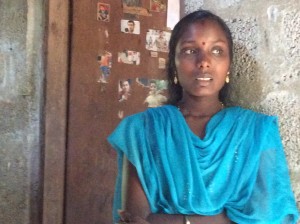 “In addition to long working hours and physical abuse, she is being denied medicine by the employer and proper food,” she added.

Jasmine’s mother Raheena Beevi, 52, left to work in  Saudi Arabia in February 2017.  An agent she met through a neighbour facilitated her recruitment.  “What we know is that she went to Saudi through Chennai airport (in southern India). However, we don’t know where she is in Saudi. Only thing we know is that she is struggling a lot in that seven-member family, like a slave without medicine and food."

It’s easy for agents to illegally arrange tourist visas to the UAE for Indian women. Once in the UAE, the agents shelter the women while procuring a job for them in another Gulf country, before their UAE visa expires. The women aren’t stopped from entering other GCC countries as long as they have a job visa.

In this process, embassy procedures are circumvented. Women enter another country without the knowledge of their home country embassy, and outside the terms of the MoUs signed between origin and destination countries.

“I am a single mother. My brother is disabled, so he can’t work. We depend on our mother’s salary. We are struggling a lot.” The 'agent’ is of little help and is demanding Rs200,000 (USD 3,111) to bring Raheena back to India.

Jasmine’s case is not an isolated one.

Simi Sindhu is also waiting anxiously for her mother’s return.

“Amma called me on January 22 to say that she will remit Rs20,000 for our expenses. That was her last call,” Simi said. According to Simi, her mother Sindhu is being overworked, without proper food or rest.

Sindhu went to Saudi Arabia in October 2016 through unofficial channels.

“Amma stayed for one month in Mumbai and then was taken to Saudi Arabia by agents,” Simi said.

Both Sindhu and Raheena are victims of trafficking to Gulf countries by Indian middlemen.  In 2015 the Indian government implemented the eMigrate system to ensure safe migration, but unregulated recruitment is still rampant.  To promote the welfare and protection of female workers, the Indian government enacted certain recruitment regulations and restrictions. From August 2, 2016 onwards Female Indian workers with an Emigration Check Required stamp on their passport can be only recruited through six government recruiting agencies.

Monica, a 29-year old Indian woman was duped by an agent in Mumbai and sent to Ajman, UAE. She said she spent a few weeks in the UAE, after which she was handed over to Omani traffickers for OMR500. She pleads for other women to not fall prey to unregulated recruiters. See the end of this article for the rest of the interview.

Foreign Employers who intend to recruit Indian female domestic workers must register themselves on the e-Migrate System through the missions in their countries and deposit a bank guarantee equivalent to US$2500. After registration, they can approach any of these six agencies for recruitment.

All women migrating on the ECR passport, irrespective of the nature or category of employment, must now be at least 30 years old.

The Indian government also has signed MoUs with Gulf countries to protect both female domestic workers and nurses.  However, migrant rights activists claim that lack of regional pacts with the Gulf countries and India is leading to cross-border trafficking.

“It is quite easy for Indian women to get a tourist or visit visa to the United Arab Emirates. Agents misuse this facility. They traffick Indian women to UAE first and then ‘sell’ them to employers from other Gulf countries,” according to Sister Lissy Joseph of the India-based National Workers Movement.

“Salaries will not be given, working conditions will be worse than usual and in many cases, they will be abused physically and mentally,” Sister Lissy highlights the plight of those trafficked.

“Moreover, when we come to know about exploitation, it is quite difficult for us to rescue them. Even Indian mission houses and the Indian Ministry of External Affairs will struggle a lot to rescue and repatriate these women,” Sister Lissy added.

A social worker in Oman, who requested anonymity,  said that he has come across half a dozen cases in 2016 alone.

“I have personally helped in rescuing six trafficked Indian women in Oman,” they said.

With the rise in illegal recruitment, and with some advertising their services blatantly, the Indian Protector General of Emigrants M C Luther has cautioned citizens not to fall prey to illegal agents.  (https://twitter.com/ProtectorGenGOI/status/863013907249729537 )

@avigem18 @MamataOfficial @KolkataPolice Any recruiter who does not quote his Regn no. and gives an advt.in papers in India, is an illegal agent. Pls file FIR against paper n agent.

According to Rafeek Ravuther, an Indian migrant rights activist who produces a television programme to find missing Indians in the Gulf, the number of exploitation cases is on the rise.

“Government says go only through registered agents. But sub-agents in the neighbourhood lure the potential migrants into a trap and traffic them,,” Rafeek added.

Some videos and official tweets advise Indians to migrate only through official recruitment agencies and to contact the Indian embassy once they arrive in the foreign country. However, it’s not clear if the campaigns are reaching their target audience.

Unfortunately, India does not have a proper pre-departure training programme for domestic workers. While it may be too late to warn to workers of exploitative recruitment practices after they've been already recruited,  structured training on safe migration could still empower and protect women. Videos and tweets only reach a small contingent of potential migrants, and there is no concerted effort by the government to educate at district or village level.

Moreover, the ECR stamp is required only for those who have not passed the 10th standard certificate (which one takes at age 15-16), and one can still travel abroad on a visit visa with the ECR stamp. ECR status on the passport does not function as an adequate check on recruitment practices.

With the e-migrate system, the workers must submit their papers online. So even those who chose to go through regular means are likely to turn to an 'agent' for help. In a country with large income equalities, poor literacy rates, and language barriers, the dependence on e-governance to solve problems is too simplistic.

In 2016, the number of Indian migrant workers given emigration clearance for recruitment to  Gulf countries was 520,960. But migrant rights activists say that this is only a fraction of the total number of domestic workers in the region, as many have not migrated through regular channels.

Please note the subtitles are partial and approximate transcriptions.

Monica describes conditions with recruiters in the UAE, and a social worker discusses how he was able to rescue her.