Qatar abolishes exit permit for most workers, including domestic workers

Qatar passed a law today abolishing the exit permit for the majority of workers in Qatar, including categories of workers who were earlier excluded – Ministry, government and public institution employees, workers in the oil and gas sector, agricultural workers and fishers, and those employed in the private sector can leave the country temporarily or permanently at any point during the contract.

Companies are allowed to present a list of individuals, not exceeding 5% of their total employees, who will still require exit permit. Those employed with the armed forces will also require permission.

A report released by a local daily, quoting the Director General of Passports, Brigadier Mohammed Ahmed Al Ateeq, mentions the financial risk to workers who do not notify their employer.

“If a domestic worker leaves the country without informing the employer, the worker will be deprived of any financial settlements, tickets and also will be denied returning to work for another employer till the completion of the legal period of 4 years.”

However, the English text of the law makes no mention of these financial repercussions.

As the law comes into effect, Qatar must recognise  the inherently exploitative nature of live-in domestic work arrangement and actively monitor the implementation of the law.

The still rampant practice of passport confiscation, isolation of domestic workers, and not allowing workers to leave the household on the off day, are some of the impediments to effective implementation of the new law.

It will also have to take measures to ensure workers are not penalised – for example, through withholding of salary and/or end of service benefits or lodging false complaint of absconding – for wishing to leave the country either temporarily or permanently. 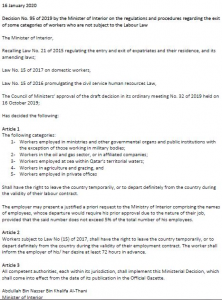