Four months since Qatar announced the removal of the No-objection Certificate (NOC) to change jobs, certain old and exploitative practices persist. But the growing backlash against the reforms is a cause for concern, as the government attempts to allay the fears of its citizens and their businesses.

In the Shura Council’s first meeting of this year, Labour Minister Yousuf bin Mohamed al-Othman Fakhro assured council members that “the transfer of sponsorship has rules, controls, and procedures that will preserve the rights of all parties” and that “the number of workers who requested a transfer is few and that those whose requests were approved are smaller.” That was not the only comment to raise doubts on the implementation of the reforms. He also stressed that while the law allowed workers to submit a request to change employers, it was still “subject to approval or rejection after communicating with the concerned parties.”

Over the last few months, Migrant-Rights.org (MR) has spoken to dozens of workers seeking to change jobs and provided them with guidance on the procedures. Initially, these procedures were simple and straightforward (see leaflets at the end of this report) and in most cases, could be completed in four steps all carried out online on the Ministry of Administrative, Labour and Social Affairs (ADLSA)’s website:

The reasons for rejection that we encountered either owed to cases filed by the current employer (such as absconding or theft) or because the potential new employer has pending cases.

In the first few weeks after the reforms came into effect, many workers did manage to secure a job change.

However, beginning in November, there has been a concerted and vocal backlash against the reforms from citizens, primarily those who run small and medium enterprises, but also those who employ domestic workers. The critics included influential members of Qatari society, including Shura Council members.

Some of the concerns raised were valid, particularly about the difficulty in recruiting new workers from abroad within the one-month notice period, given the ongoing pandemic-related travel restrictions in many origin countries. But many of the complaints were about how bigger companies that can afford to pay more will poach workers from smaller businesses. Employers of domestic workers cited the high recruitment fees they pay as their reason for protesting against job mobility. The tone of all these arguments was uniformly Kafala-esque.

The reforms do stipulate the reimbursement of recruitment fees by the new employer to the old if the transfer happens during the probation period, not exceeding six months. The reimbursement cannot exceed two months of basic salary.

Appealing to the critics and promising steps to ensure that the rights of businesses are protected, the ministry said a worker would have to follow due process to change jobs, and “…is required to attach his resignation copy with the application for a job change.” In addition, the official said that a signature and stamp from the new company is also needed when a worker wants to transfer.

The Head of the ILO Project Office in Qatar, Houtan Homayounpour, told Migrant-Rights org that "the process at ADLSA to change jobs in Qatar does not require an actual resignation letter, however, dialogue between workers and employers is fundamentally important for all parties and its good practice.”

Yet, the resignation letter requirement, though not law, is fast becoming the norm. One of the largest security services companies in Qatar issued a formal circular to this effect (see image), quoting the interview of the ‘senior official’. This may well result in a NOC-like situation, as employers can (and do, based on cases brought to our attention) refuse to sign or stamp the resignation letter as proof of acceptance. The reform then becomes ineffective.

Companies are also using the argument of non-compete, even for jobs that do not involve access to finance or intellectual property, for which the clause seems logical. Examples MR has encountered include workers of cleaning companies, delivery drivers and domestic workers attempting to change jobs, attempting to transfer either to similar companies or related roles. 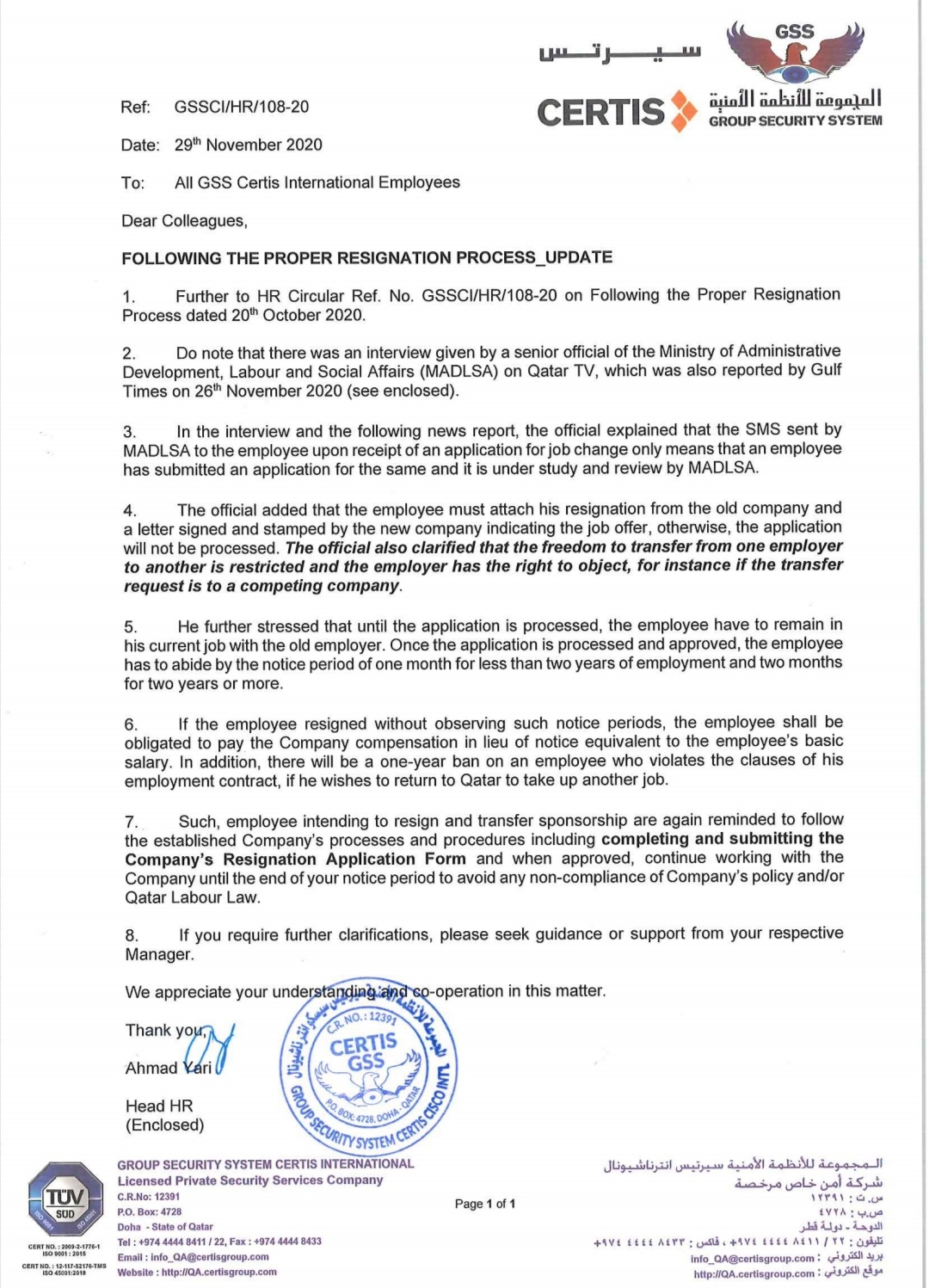 Furthermore, the e-notice site is difficult to access at most times. Both MR and workers had attempted to use it at different times of a day over two weeks, with little success.

A worker now has to show a paper trail (which requires several stamps and approvals from the current employer) and attempt to change jobs by applying physically at labour offices.

MR Spoke to informal community groups and officials at embassies of countries of origin who all echo similar concerns. In fact, they now advise workers, especially domestic workers, to continue in their current employment if they are paid on time and there is no threat to life, as the alternative may throw workers in greater jeopardy.

Leaving a workplace, which, in the case of domestic workers, is also their home, may result in absconding charges which are difficult to clear. Absconding charges also often result in detention and deportation. The unofficial shelters that most embassies run for women are unable to accommodate migrants in large numbers, so they dissuade those wishing to leave their homes from doing so. Qatar does have a shelter for trafficking victims, but it does not receive drop-in cases and does not accommodate domestic workers in general. During the pandemic, it did accommodate a couple of dozen workers referred mainly by embassies, however, the shelter itself does not provide services to help redress grievances of workers.

"...they now advise workers, especially domestic workers, to continue in their current employment if they are paid on time and there is no threat to life, as the alternative may throw workers in greater jeopardy."

As Qatar continues to implement these significant reforms and gets past the teething issues, it is important to see how the system serves the most marginalised and to make sure that it does not fail those most in need.

Domestic workers who struggle to access official mechanisms during the best of times are likely to be excluded from the full benefits of these reforms if the state does not put in place procedures specific to this target group. These procedures must take into consideration the restrictions on mobility and language barriers that domestic workers face.

While concerns of the SME sector and employers must be addressed, it must not come at the cost of workers’ mobility. A resignation letter signed by the employer is a de facto NOC.

With Qatar Visa Centres in origin countries resuming operations, businesses will be able to recruit as per their needs both from overseas and within the local labour market. This may go some ways towards ensuring there are no new obstacles placed in the path of effective implementation of these laws. 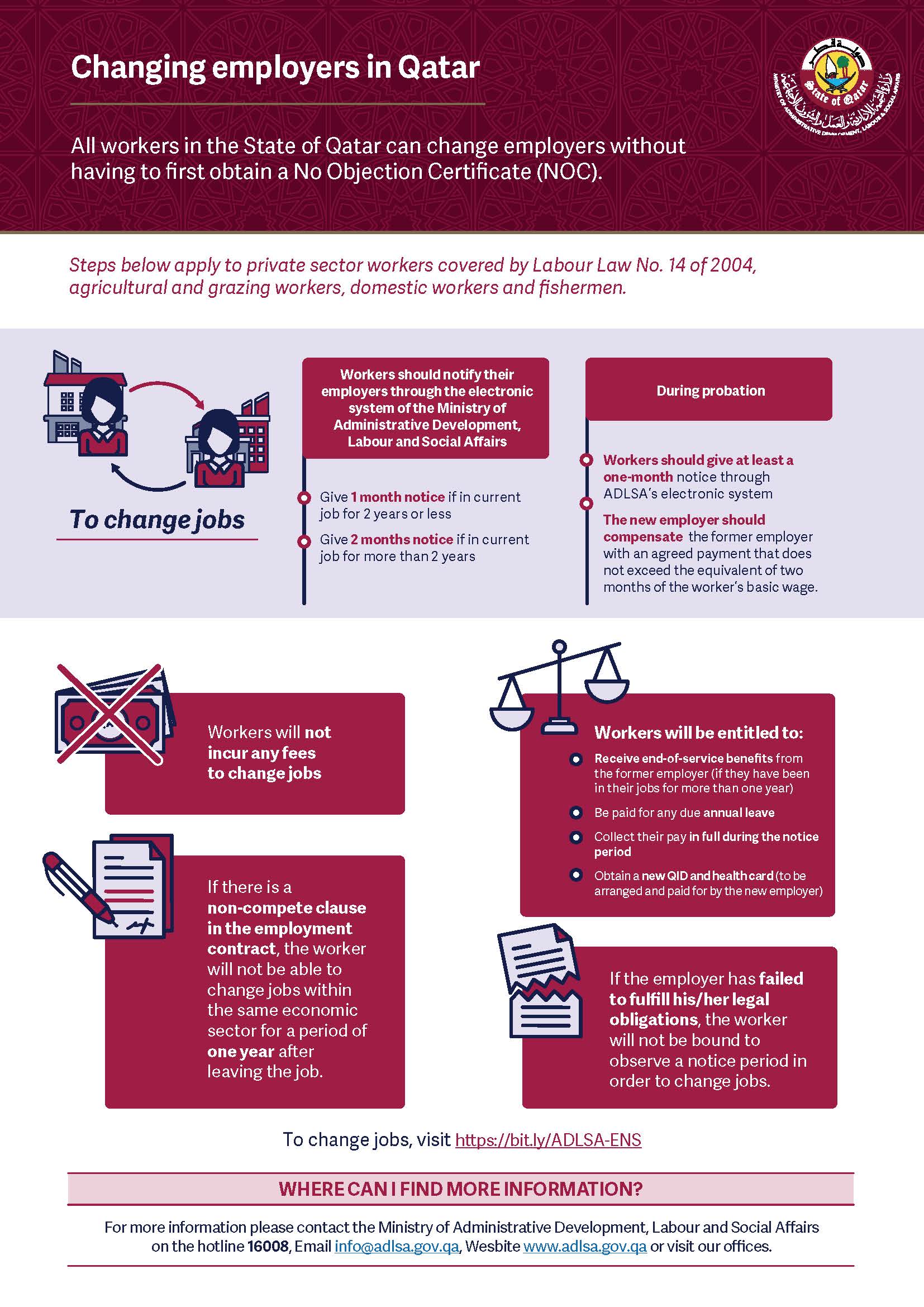 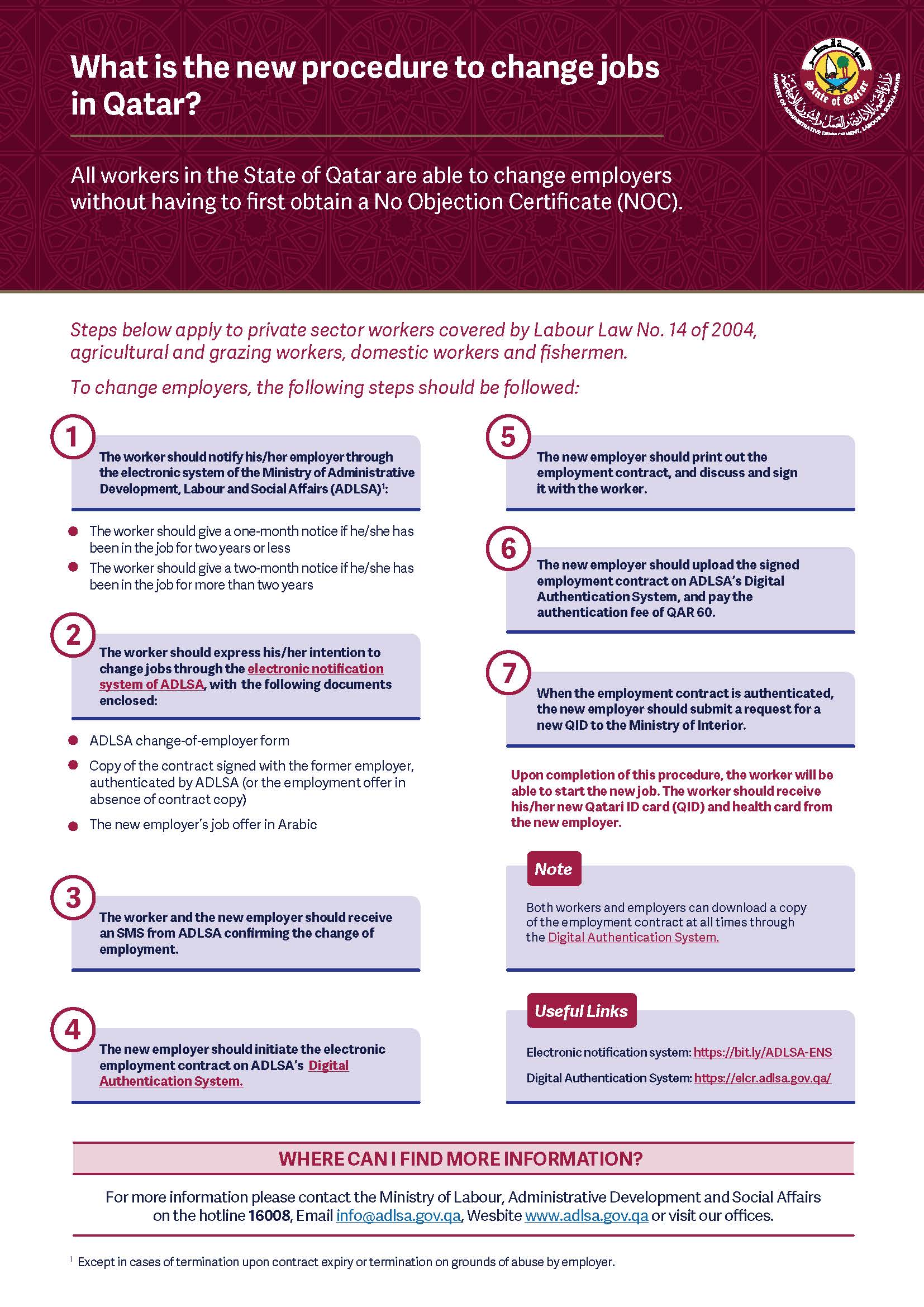