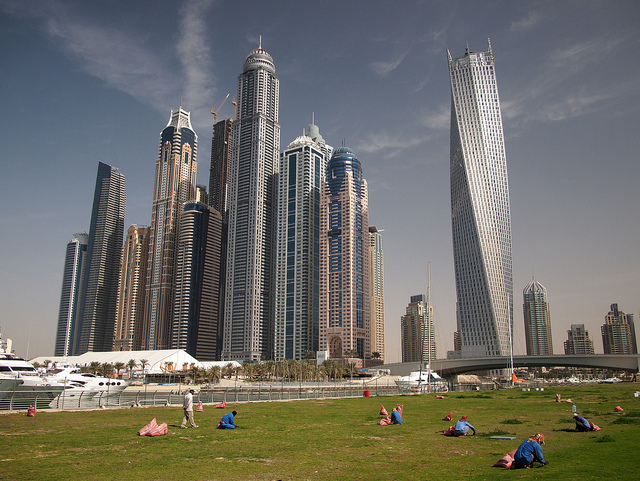 While 50,000 NaMo followers at the centrally-air-conditioned Dubai Cricket Stadium were chanting a NaMo mantra under the spell of Indian Prime Minister Narendra Modi’s mesmerizing speech, hundreds of Indian workers in a labour camp in Ajman – some 45 kilometers away from the  “Marhaba Namo” venue – were struggling to ignore hunger pangs and catch up on some sleep.

“We are unpaid for the last eight months. There are around 200 workers like me in the camp in dire need of food and other essential supplies,” a worker from the south Indian state of Kerala, told Migrants-Rights.org.

“We push the days ahead by doing some menial jobs like cleaning cars and collecting dumped coke cans outside the camp,” the worker, who refused to be identified, added.

The accommodations’ electricity and water supply was recently cut off. Workers have been using wood from broken furniture to build a fire for cooking.

"They are researching on how to torture and flush us out,” the same worker added.

These are not unusual anecdotes.  The stories are always the same, only names and places change.

This is why Modi’s ‘historic’ visit to the UAE should have diverged from the usual trade-oriented mission; in addition to acquiring business for India, securing a backing for India’s bid for United Nations’ Security Council seat and promoting Yoga,  his agenda should have prioritized the condition of the Gulf state’s 2.5 million Indian workers.

However, as VM Satish, an Indian journalist in the UAE who has also published a book on migrant workers, said, even though expectations were high among Indian blue-collar workers, there was nothing for them from Modi.

"Modi’s visit should had to be a different one in the UAE than his earlier visits to United States and other countries. It should have focused more on workers' welfare," said Satish, who is also an office-holder of the Indian journalists association in Dubai.

The Kafala system ties workers’ visas to particular employers and severely restricts their right to change employers. Over the past several years, the UAE government has implemented some reforms in response to condemnation of the abusive practices rampant under the Kafala system. But the system and its hold on the country’s migrant workforce remains intact.

And while migrant workers in other sectors are protected by wage protection system, domestic workers are not yet included in the scheme.

“There was nothing for poor Indians. Everything was for rich Indian businessmen.   When the Indian officials were busy in scheduling and arranging the 10-minute photo-op labour camp visit for Modi in Abu Dhabi, they conveniently forgot about the starving Ajman workers,” Satish added.

In the past, UAE officials have shown some openness to international cooperation on labor standards, for example taking an active role in the Abu Dhabi Dialogue, established in 2008, which brings together 11 origin countries and seven Asian destination countries and aims to create a regional framework for regulating labor migration.

So, if Modi – the prime minister of largest remittance receiving country in the world  ($72b in 2014)  – had done a little more homework before the trip to understand the ground reality, the needs of the low-income blue-collar workers and their demands for welfare and safe migration, the visit could have been truly historic. Along with taking selfies with Emirati rulers and visiting the grand mosque, “Modiplomacy” could have initiated some discussion of Kafala reforms.

But instead, it has drawn criticism as a “Modi Road Show”  in the eyes of poor blue-collar migrants. “Modiplomacy” secured land to build a temple, but failed to push Emirati rulers to follow through on promises for greater reform labor reforms.

A few years back, when a group of Indian workers were involved in a verbal duel with an ambassador to one of the Gulf countries, one shouted loudly, “Sir, you are here only because we are here.” Wasn’t he true? I feel so. The Indian rulers and their mission house officials reside in the region mainly because workers, especially the blue-collar workers, are critical national assets.  So, our priority should be their welfare. Isn’t it? It should be…