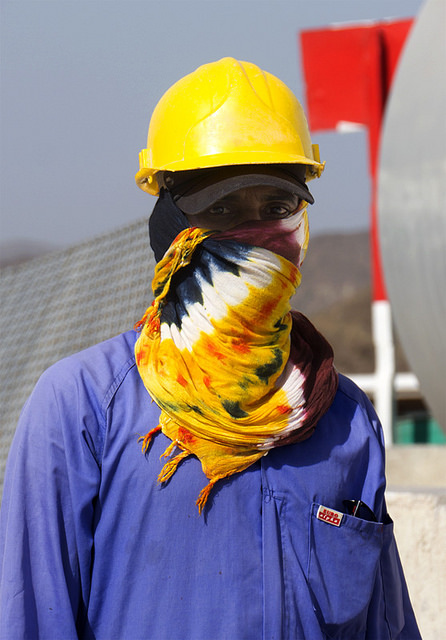 The drop in oil prices has left migrants in limbo. Oil companies that have lost projects have defaulted on migrants' salaries or entirely abandoned them.

For the last six decades, oil-rich Oman has attracted job-seeking Asian migrants. But since mid-2014, Oman, the only non-OPEC member in the Gulf, has become a less appealing dream destination.

In the beginning of 2014, when the Omani government decided to reduce the migrant population from 39 percent to 33 percent, an estimated 100,000 migrant jobs were at risk to Omanization.

In the last year, many migrants left Oman or were forced to leave due to the nationalization process.

A Migrant-Rights.org investigation reveals that at least 1,000 migrant workers have been stranded in Muscat for the last seven months,  their companies having failed to pay their salaries.

“Company says that they are not getting new projects. They claim that dip in oil price has affected them a lot. Whatever it may be, we are in trouble now,” according to an Indian worker from a construction company, which was contracted by Petroleum Development Oman (PDO).

The exploration and production company accounts for about 70 percent of the country's crude-oil production and nearly all of its natural-gas supply.

“Around 300 from our company are stranded. We have not received salary for the last six months. In addition to this, the work permit for many of us has expired. The company is unwilling to renew it and wants us to leave Oman by forfeiting our salary,” the worker added.

[quote] We have not received salary for the last six months. [/quote]

The Muscat-based company had projects in Ibri, Mabelah, Seeb and Bausher.

“Now, food also has become a daily challenge for us. We have approached the Indian embassy. Don’t know how this will be resolved,” the workers added.

Hundreds of workers at other companies are also facing a similar situation.

“Last year, the company supplied [sic] us to a steel company. The job was completed last month. Now we are sitting idle at room. The company says there is no new projects and they are not in a position to pay end-of-service benefits. Now, what to do. We are in a fix. The big question in front of us is whether we have to stay back without salary or go back home without money,” workers said.

A few hundred of workers from another company face the same situation, also claiming that they have not been paid for the last eight months.

“We are also aware that citing market conditions, companies are defaulting on workers’ salaries. We suspect that these companies are exploiting the situation. How can workers who have responsibilities back in their home country stay without salary. So, they will flee in search of a job and eventually become undocumented,” Shaji added.

According to the recent figures from the Ministry of Manpower, more than 57,000 expatriate workers have ‘absconded’ from their employers since the beginning of this year.

To be exact, some 57,420 workers have fled their employers in the first six months of 2015, representing around three percent of the 1.8 million expats registered in the country. Migrants form about 44 percent of the total Omani population.

“If a worker is denied the salary agreed upon contractually and are  provided decent working conditions, they will not ‘run away’ and become ‘absconders.’ Oman is considered a labour-friendly country. But the situation seems to be changing,” Shaji added.

Meanwhile, a trade union leader in Oman said that denying salary for the workers is a clear violation of Oman’s Labour Law.

“Companies are not supposed to default salary of their workers at any conditions. It is a clear violation of labour law,” Mohammed Khaldi, a board member of General Federation of Oman Trade Union, said.

“Companies are not only defaulting salary for migrants but also for nationals. At present there are 120 national workers  in the oil sector who haven’t been paid as companies are winding up their operations citing oil price dip.”  Kalidi wonders, “if this is the condition for citizens, imagine how much worse for migrants?”