“The System is Down”: Entrapment and the Arbitrary Power of Absconding Reports

One vicious weapon of the Kafala system is the absconding reports that sponsors are allowed, and even encouraged, to use against their workers. The moment a worker is reported as absconding or absent from work, they are considered ‘illegal,’ and in violation of residency laws. They are pushed arbitrarily into a violent cycle of being haunted by police, imprisoned, deported, or in other cases, left without work and banned from traveling. Although migrants can file claim against “malicious” absconding reports, their complaints rarely achieve any result.  In virtually any dispute, including delayed or unpaid wages, or contract disagreements, sponsors use the power of these absconding reports to shut out worker's access to virtually anything. Even their bank accounts and possessions can be confiscated or “frozen.”

Several cases reported in past months involve educated professionals, in addition to the presumably more vulnerable blue-collar workers. Egyptian media recently featured several cases of Egyptian workers trapped and in search of rescue from their Saudi sponsors. Each of the interviewed workers possess documents supporting their claims.

Samir Abu Zaid, who worked in the Eastern region of Hafr al-Batin, was fired from his job at “Sufra’a al-Ghad” private school, without due cause. He sued his sponsor to claim his owed salaries and received a ruling in his favor. But Abu Zaid soon realized that even a court order could not hold against the power of his kafeel. He found out that his sponsor reported him as 'absconding' after the court ruling, leading to his arrest and deportation.

Saudi police ignored his repeated pleas to uphold the court ruling. He was bailed out by a friend, only to return four days later. Abu Zaid was asked to post bail, but police had taken possession of the car he intended to sell after he was reported as absconding. Abu Zaid’s wife sent requests to authorities and to the Egyptian embassy, but they offered her nothing but empty promises. Abu Zaid tells his story from jail in the video below:

Another case involving an Egyptian professional is that of Asma Abdelfattah Kami, who posted the video to Facebook asking authorities to save her from the sponsor. Asma was recruited to work in Saudi as a general practitioner in a hospital in Raas Tanoura, near al-Damam. Her sponsor told her she should work as a pediatrician instead, but she refused. He threatened her, blocked her from entering the hospital, took away her work visa, and had her imprisoned. His threats did not stop, even when she sued him at Damam court. 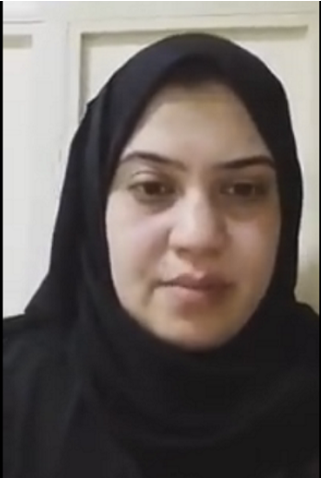 Screenshot of Asma Abdelfattah Kami's interview with a TV channel.

In fact, police initially refused to file Asma’s complaints “because the sponsor is traveling abroad.” Instead, Asma’s husband was summoned to an interrogation, and the Ministry of Interior deported Asma – without even paying for her tickets.

A series of traps

Asma states that she also witnessed the sponsor physically assaulting another doctor, accusing him of stealing, before also evicting him from the doctors’ housing

In Asir, southwest of Saudi Arabia, two Egyptian engineers were trapped for three months without work or payment after their sponsor suddenly decided to cancel their contracts. The engineers turned in their work permits and all work-related possessions in ordered to be cleared to leave. In exchange, their confiscated passports were returned to them. They, too, had to purchase their return tickets on their own dime, though the law states that sponsors bear responsibility for return flights if they terminate contracts early.

But once at the airport, the two discovered that their sponsor did not arrange for their exit visas. They called the sponsor, who told them “to go back to where they came from.” They went to the Labor Disputes’ Committee to file a complaint, but the officer turned them away saying “the system is down, come after the weekend.” Meanwhile, the sponsor reported the two as absconding and accused them of stealing work possessions valued at 4,300 Riyals.

The two engineers noted the police did not care to hear their side of the story. They were sent to court, where the sponsor failed to attend the first two sessions. They could not lodge a complaint against him for the “malicious absconding report” since he reported them absent ahead of their complaint.

When the two tried to resolve the dispute outside court, their sponsor asked them to sign new papers, including an undated contract. They withdrew their complaints, only to find out that they now faced charges for theft and for failing to work for the remaining period specified in their original contracts – the one the sponsor had terminated. They can not even be deported because their criminal charges mean they are banned from travel.  At this point, all they want is to leave the country, without their salaries or any compensation.

Cases such as these are common across all GCC states.

In a recent incident in Qatar, a migrant worker who was a victim of contract substitution attempted to obtain clarity from the labour department, human rights committee and his own embassy, with no success. The Ukranian national was working for a Saudi-owned restaurant in Doha’s upmarket Pearl-Qatar development.

His sponsor agreed to provide an exit permit upon payment of QR6,000. What followed, and continues to, was a string of ill-informed decisions, as no one who could properly advise the worker.

The sponsor, realising that the absconding case would not hold strong, proceeded to file a financial misdemeanor case against the worker, who had no access to any cash transactions at the restaurant.

The case was finally dropped after several weeks of imprisonment, and only then was he allowed to exit the country,

These are only a few cases amongst the many that go unreported. The experiences of these trapped workers demonstrate how Kafeels enjoy arbitrary powers that enable them to deprive workers of their money, mobility, and freedom. The Saudi legal system facilitates exploitation, and is moreover complicit in this abuse, as ministry officials routinely dismiss complaints “because the system is down,”  while police ignore court orders ruled in favor of workers. The system is indeed down, as it fails to protect the most basic rights of migrant workers.