Earlier this month, the Kuwait Society for Human Rights (KSHR) in cooperation with the Department of Domestic Labor in the Ministry of Interior and the Dutch Embassy in Kuwait, published a booklet that aims to help domestic workers understand their rights under local laws. The booklet includes translations of the recently passed domestic labor law, with an additional section guiding workers’ arrival in Kuwait. Lawyer Khalid al-Hmaidi, head of KSHR, said the booklet aims to raise awareness among domestic workers, to help them understand their rights, and to help combat human trafficking. 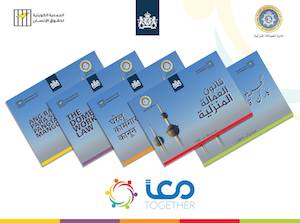 Free copies of the booklet are available online in 6 languages so far (Arabic, English, Tagalog, Hindi, Urdu, and French.).The booklet is the first in a series of forthcoming publications that will be distributed at airports, clinics, and other locations frequented by workers.

Migrant-Rights.org spoke with Sahal al-Gunaid, head of projects and programs at KSHR. Al-Gunaid hopes that translating the laws and using visuals will make the migration system easier for workers to navigate. It should be noted that the visuals used are not infographics or illustrations, but rather generic pictures of workers cleaning. However, Al-Gunaid notes that the booklet is the first step in an ongoing 16-month project, which will include the development of a multi-lingual online platform. The platform will provide essential information to workers, and include smartphone apps that offer legal advice. KSHR also plans to set up hotlines to offer legal advice to workers and to document violations.

In its current iteration, the booklet reflects the lack of official support mechanisms for domestic workers; it does not tell workers how to seek advice or help in cases of emergency, nor provide contact information for embassies, the domestic labor department, or police stations.  In regards to the involvement of authorities and embassies in the project, al-Gunaid told MR that KSHR is currently corresponding with all sides to create a collective partnership, which will extend beyond the project.

Kuwait passed the region’s first  domestic labor law in June 2016, setting maximum daily working hours, a minimum wage, and a standard contract. The law introduced a number of important regulations, such as the right to a living space, overtime payment, prohibition of passport confiscations, yearly compensation, as well as vacation and rest days. Yet the law suffers of ambiguity in certain areas, such as the standards for “good housing” and the duration of rest breaks. The law also lacks efficient or meaningful mechanisms of enforcement and accountability. For instance, Kuwait’s comprehensive court only informed state departments that the law exempts domestic workers from any fees when submitting complaints this month. Further, domestic workers will still need free legal aid, translators, and legal, reliable means to leave their employers’ houses in order to submit complaints or otherwise seek help in the first place.