[Stories of Origin] In the land of friends and uncles, everyone is an agent

In the concluding instalment of the Stories of Origin series from Uganda, Migrant-Rights.org speaks to those who facilitate migration and those who deal with the consequences of irregular migration. In the first part, we spoke to Ugandans scarred by their experiences in the Gulf and those who have made a success of it, despite the hardships.

As one lands in Entebbe, the magnificent Lake Victoria sparkles, almost colourless against the relief of the rich greenery and deep red soil. The Ugandan passengers on the flight all crane to catch a glimpse of their home, before their feet touch the ground. There’s an eagerness you see time and again, on flights ‘home’ – to Kathmandu or Colombo, Kochi or Dacca. The returning sons and daughters of the soil feasting with their eyes, from up in the sky, what they’ve missed for years. It’s a searing contrast to take off from the monotony of brown of the Gulf and land in something so verdant. 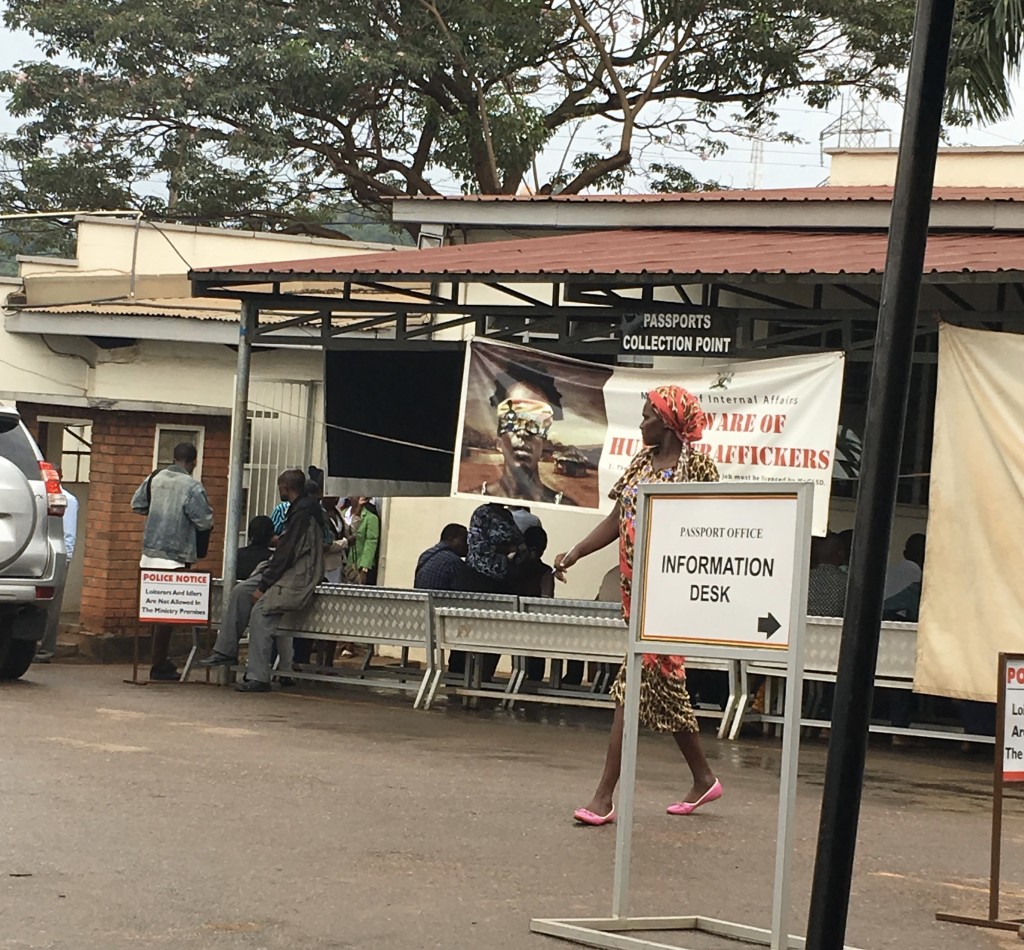 Inside the complex of departments under the Ministry of Interior. Trafficking messages abound.

Some of those coming back are the ones who will help others go abroad – they have job offers and ‘free visas’ in their kitty, and for a not-so-small fee (1 million to 2 million shillings), become stealthy recruitment agents.

In Uganda, migration of lower-skilled workers (outside of Africa) is a rather recent trend. Governments, communities, NGOs and recruitment agencies are learning trial by error; unfortunately, those errors cost workers their lives and livelihoods. The lexicon of migration used by stakeholders is itself a problem –’ export maids’, ‘license to export labour’ – a commodification from the start.

Atuko Grace, Principal Labour Officer of the Ministry of Gender, Labour and Social Development, does not deny the lack of preparedness.

“In 2013 we signed a bilateral agreement with Saudi Arabia, and we had challenges,” she says, referring to the large number of abuse cases reported. “Girls were being taken without pre-departure training. The Government was involved in the training of security guards etc, but not for domestic workers.”

No experience, no training

When cases of abuse were widely reported, Uganda banned its female citizens from going to the Gulf as domestic workers. In May, a Parliamentary decision was taken to lift the ban, as per which, workers will be deployed only to countries with which Uganda has signed an agreement.

“We recently signed an agreement with Jordan. And we have revisited the Saudi agreement. We don’t want to make the same mistake we did while signing the agreement with Saudi. So we have called for proposals to establish for pre-departure training centres.”

Earlier, when domestic workers were being sent through formal channels, the pre-departure training was done by agencies themselves.

“About the language, the culture, how to behave in the household, how to use electronic appliance etc. But it’s not a module. It’s what the agency decided was important.”

While agencies are licenced by the Ministry’s Externalisation department, the pre-departure training itself was not supervised and informed by the Government.

As rudimentary as the training was, when the ban came into effect, that stopped. The recruitment agents we spoke to say none of them serviced domestic workers job orders now.

Unsurprisingly, the ban has been ineffective, and workers continued to go abroad. When you have uncles and friends, what need for agents?

The Ministry doesn’t have numbers, but Atuko says they receive a lot of complaints from families of victims. “Usually they would have gone through Kenya or Tanzania to the Gulf countries. Then the families tell us they are stuck there without a visa, or in a bad situation.”

I can’t go back. I will have no value in Uganda if I go back like this. And I need money to pay back debts. I just need to find another job.”

Success at what cost?

“Most of them (migrants) have left illegally. They have heard from a friend or relative. The co-operate with those people, complicit in those lies till they leave and land in trouble,” says Grace Mukwaya, the Executive Director of Platform for Labour Action (PLA), an NGO that provides legal aid and educates workers, both those in the local labour market and those who migrate. 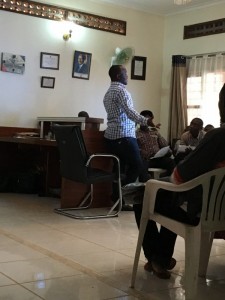 A pre-departure talk to security guards inside a recruitment agency.

“No one gets paid that little, but because it’s so low one can’t negotiate fairly. Then people started hearing about opportunities. The bilateral agreement with Saudi in particular, even when halted, gave new aspirations to Ugandans,” she says.

“Many people suffer, many people benefit. Those who succeed their lives are changed. The success stories encourage more people.”

Mukwaya’s cousin is in Abu Dhabi too. “He was getting 2000 shillings a day here. He went there and now earns 1 million shillings. He says ‘I work very hard, am paid very little. I will look for another job.’ But he never says he will come back,” she points out.

Osman* and his friend recently moved to Abu Dhabi and reached out to Migrant-Rights.org. What he was promised was AED2000 as a security guard, and what he received was AED500, working in a bakery. Despite the conflict with the employer and being stranded in the city, he doesn’t want to leave.

“I can’t go back. I will have no value in Uganda if I go back like this. And I need money to pay back debts. I just need to find another job.”

Osman and Mukwaya’s cousin, like thousands of migrants to the Gulf before them, will suppress the hardship and play up the successes when they finally go back home. Until then, they do everything in their capacity to make good of a terrible situation.

In general, and more so since the ban, many citizens go to the Middle East as domestic workers, through places of worship, both churches and mosques.

“A Ugandan worker in the Middle East might get a deal to bring in domestic workers. I’ve heard they get as high as $300 per worker. They often reach out through the Pastors, Imams, Preachers and local leaders, each getting a cut, and who in turn encourage the women to take these jobs without any awareness of the consequences,” Mukwaya bemoans.

The usual spiel goes something like this: “God has done something wonderful for my aunty, He is going to take you to…”

After a year on the streets of Kampala without a job, this would be an easy sell.

A PLA study on trafficking looked at confirmed victims of international trafficking (VIT) between 2010 and 2016.

According to the Ugandan Ministry of Internal Affairs Annual report on trafficking, a total of 424 persons were victims of transnational trafficking. The breakdown is as follows:

Trafficking is rife. And the word is also used as a shield to deflect attention.

Nooh Mayambala runs a recruitment agency (mainly providing security guards to the UAE) and is not pleased that all the ills of labour export are blamed on recruitment agents.

He is the Secretary General of the Uganda Association of External Recruitment Agencies. Weeks before the ban was lifted, they are holding a workshop in an upmarket Kampala hotel, and during a coffee break we find him and his colleagues are deep in conversation when we interrupt them.

“We (the agencies) have tried to regulate ourselves; we are working on monitoring the situation, and yes, we are lobbying for the lifting of the ban, after some provisions have been included of course,” he said.

“Officially Uganda had provided domestic workers to Saudi alone. We (the agents) had just started work on it, as we had no previous experience. Then the traffickers stepped in quickly. You can never trace those who have suffered to a licensed agent,” he says, defending his kith.

The ‘trafficker’ is the bogeyman, faceless, nameless and someone else’s problem.

So does that mean that all the agencies follow ethical processes, and the workers they deploy face no problems?

It’s true that the association has been more proactive than the government itself. They had already made reconnaissance trips to Jordan and met with the recruitment association there.

Mukwaya feels though there are definite problems with recruitment agents, at least the workers will know where they are going and what kind of work they are expected to do.

Most of the girls are not Muslims but are subjected to wearing hijabs. They are not told this earlier.”

From ignorance to strife

“The problem is that the government does not promote the list of registered or licensed recruitment agents. There’s a list available in the Ministry but how many people go there to see it. It is important to educate workers about going through right channels. The list should be available in local council offices in the villages,” she suggests.

“When we get complaints most workers are not even aware who took them, where they land,” Mukwaya says.

Moses Binoga is the Coordinator of the National Trafficking in Persons Task Force. His is a one-man office within a sprawling complex that houses the Interior Ministry’s different departments, including passport issuance. Right at the entrance to the complex is a large poster advising people against trafficking, and across that signage is a tent where hundreds of citizens are lined up to get their passport paperwork done.

Like most of Uganda, it’s a vibrant and communal space; women in crisply starched colourful frocks and men in smart suits buzz around. Strangers become friends in a matter of minutes. They bond over a familiar tribe name, a smile, a common destination… 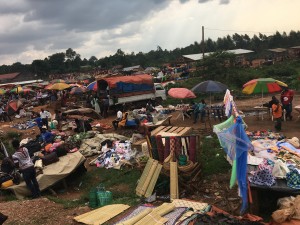 Acclimatising to life in the Gulf continues to be a big problem for Ugandans, who are used to a rather vibrant, community-based lifestyle. Proper pre-departure training will align expectations with reality.

With that atmosphere in the background, it’s somewhat easy to understand why Binoga feels the problems ‘housemaids’ face in the GCC is both of their own making and that of the employer.

“Our Ugandans are not sensitised to the work there. Even those who go through agencies don’t have proper information. Their expectations are not met due to insufficient information. They don’t understand the culture or the work requirement,” Binoga continues, “Then there’s this big problem about food. They are not told they will get only bread. For us, if we don’t eat Ugali (maize meal) we feel we haven’t eaten. And in our culture eating leftovers is an insult.”

He adds, “Most of the girls are not Muslims but are subjected to wearing hijabs. They are not told this earlier.”

Binoga feels pre-employment briefing for employers is as important as a pre-departure orientation for workers.

“The workers are expected to do everything without enough rest or food. Forced to work even when sick. In fact, many contracts in Saudi state that if the worker doesn’t finish the contract then they pay back recruitment fees.”

Though irregular recruitment is an offence in itself and promotes trafficking (recruited through deceitful means, debt bondage and exploitation), unless a complaint is filed, it is not considered trafficking.

“Many Arab recruitment agencies operate here illegally using loopholes. There are two kinds of licence available. One internal and one external. They get an internal licence, find workers, and send them abroad by collaborating with criminals,” he says.

In the swirling mass of people, under the shade of trafficking posters, one is bound to bump into both would-be victims and trafficking collaborators. Right now though, the air is filled with hope as the chimaera of wealth and success in the Gulf holds strong against reports to the contrary.

PREVIOUS: In Uganda, everyone wants to… what? … go abroad