[Stories of Origin] “I want to escape”

In the second of the four-part series, we explore the environment of desperation and speak to women who are eager to leave Ethiopia, ban or no ban. They see migration as an escape, disregarding what they are escaping to.

‘We have never been colonised’ is a refrain that echoes in every conversation you have in Ethiopia, from the front office staff at the hotel to the taxi driver, from the community worker to the petty shop trader.

A proud refrain against the backdrop of large-scale Chinese investments and schemes driven by donors from every rich country imaginable, with poverty so extreme, corruption so high, and the middle class a minority. 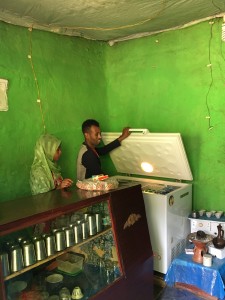 The petty store helps them survive, but won’t be able to fuel the dreams of the daughters 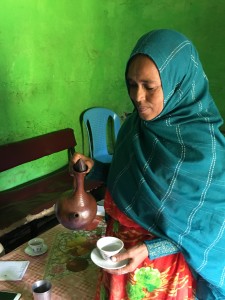 Najat’s mother understands why she wants to migrate, but will stand by the decision her son takes 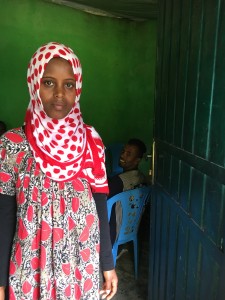 Najat is determined to go to Dubai, though her brother Aragie is not convinced.

About 370 km from Addis Ababa and en route to Djibouti, Kombolcha is an emerging industrial town in South Wollo region. The Chinese are building industrial parks, tailoring units, and the most basic of infrastructure in and around the area.

There is an effort to generate employment opportunities through these different projects.

But Najat is not buying it. Her heart is set on Dubai.

Her brother is the gatekeeper of their home and her dreams.

The family runs a coffee and refreshments shop from the front room of their home.

“The father makes the decision,” a community worker whispers, “So you will meet him first and then the girl who wants to go the Jeddah.”

“I don’t even know who will pick me up from the airport, or whose house I will work in.”

Jeddah is a generic term used for anywhere in the Gulf region.

A young man of slight build and one too many worry lines around his eyes enters the room. We learn the older woman and young girl who were at the till are his mother and youngest sister.

Aragie Yemer, all of 28, is the ‘father’. A placeholder word for the male head of the family.

He first learnt of the Middle East in 2006 when many youngsters from the village sought their fortunes there.

“I had no plans to go myself. I make do running this tea shop. But now my sister wants to go and change her life. She is 22 and has been wanting to go since 2014. She feels there are more options there. Friends of hers, even younger than her, have been talking about it,” he pauses, gathering his thoughts.

He seems displeased with his sister’s decision but knows she will wear him down sooner or later. When a person wants to migrate, they will.  Regardless of what obstacles line their way. A realisation that still hasn’t dawned upon authorities.

“I hold her passport,” he continues reluctantly. “I am worried because of the ban. She will go to Saudi if the ban is lifted if not will go to Dubai.” 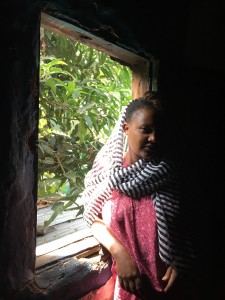 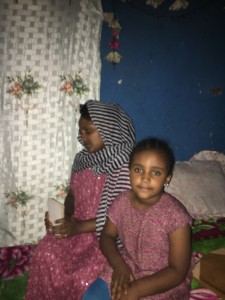 Abeba’s 7-year-old daughter is keen her mother goes to Dubai. She and her friends believe that’s how their life will get better

The reason Aragie is trying to sway his sister to stay is not just to exert his power. “We hear so many negative stories from those countries. We don’t want her to go even if the ban is lifted. She is a Grade 8 dropout, doesn’t think she can earn here.”

Aragie feels she can get into any number of vocations – petty trading, hair-dressing, tailoring.

Hairdressers, petty traders, tailors… you can’t walk 500 metres without tripping over one of these 'businesses.' These vocations continue to be the weak foundation on which many policies are built to counter migration.

Imaan, the youngest sister, is listening keenly to the discussion. The 15-year-old has dropped all pretence of helping her mother at the counter.

The decision her brother takes about Najat, the older sister, will impact her life too.

Shy and soft-spoken, Imaan says even her friends in school – Grade 9 – speak of going to the Middle East all the time. They are all convinced their lives would change only then. “I am tempted too.”

Najat enters even as her brother lists the career options in front of her. She is unmoved. She minces no words. “I don’t want to go to Saudi, ban or no ban. I want to go to Dubai.”

They are not aware that the ban is for all overseas migration from Ethiopia.

Najat hasn’t even been to Addis. “I will go there when I have to fly to Dubai. It doesn’t scare me. I haven’t convinced my family... yet.”

Yet... her mother and brother seem resigned to the fact they can no longer stop her. Her sister looks cautiously happy.

“I don’t know how much I will earn. Where I will work. I will stay for three years, send money back home… money for me.”

Her dreams are generic. A business, a better life.

“At this point, I just know my life has to change.”

Life in the Gulf is her Hail Mary pass to a better life.

“I just trust my father to get all the information. I know I am not going through a regular agent.”

There is a lack of cross-fertilisation between migration and employment policies, says Ruchika Bahl, Chief Technical Adviser, Project on Addressing Root Causes of Migration in Ethiopia.

“Ethiopia is a young country whereby in 2016 the population aged 0-29 yrs stood at 73% and working population ( ages 15-64) constituted about 53% of the population. However, our (ILO) recent assessment revealed that the current supply of labour is more than the market demand or available employment. There are limited jobs and as a result, youth unemployment is high, and that directly contributes to irregular migration ( because of the current migration ban). Lack of decent work opportunities propels the young to migrate abroad in search for greener pastures and better-paying options.”

Abeba Sied Adam is also at a similar juncture. In her case, she is being urged to migrate by her father, and as she claims, her 7-year old daughter.

Her passport and medical reports are being processed so she can go to Dubai as a domestic worker. She shrugs when she hears of a ban. Everyone is going to Dubai, she smiles.

Twenty-seven-year-old Abeba works at a nightclub in Komblocha. She is candid about her life and work in Ethiopia, despite her seven-year-old lounging on the narrow cot in one corner of the room, listening to her mother speak.

Her paperwork has been with the broker for about three months now. She has paid him 6,000 birrs so far; savings from her work at the nightclub. “I make good money there, about 7,000 birrs (USD290). And if I can’t raise more money I will ask my father for help. I have to go.”

Abeba wasn’t really planning to migrate. “My father lives in Wuchulu (90kms from Komblocha) and in his village he heard of a broker sending women from the community to the Middle East, and convinced me to meet him.”

Her father, she claims, doesn’t know she works in a nightclub and earns well.

“I just trust my father to get all the information. I know I am not going through a regular agent.”

The lady who took her in when she ran away from her parents home years ago, to work in the club, has warned her to be careful in the Gulf. “She was telling me about people stealing organs.” An accusation thrown in so casually, taken so lightly.

Abeba, now that the decision to go abroad has been made, cannot give room for any doubts in her mind.

“My daughter will live with her grandparents. She wants me to go. She sees other small kids who receive gifts from their mothers who live abroad. She wants to buy a house also. This is rented,” she says, waving her arms dismissively at the blue walls of her single room home.

Across the doorway, in one corner is a coal-fuelled stove and some utensils. An uncovered window provides the only natural light source for the room. The remnants of a birthday celebration are still up on the wall.

According to Ethiopia’s MOLSA (The Ministry of Labour and Social Affairs),  480,480 citizens had migrated regularly to the Middle East between 2011 and 2013, prior to the ban.  However, many more have migrated irregularly, predominantly victims of traffickers, mainly using brokers from both source and destination countries who facilitate illegal recruitment and labour migration.

The ‘she’ who wants a house and small gifts just turned seven the week before. She pulls out a packet of photos from under the pillow and gives it to her mother.

In frills and bows, surrounded by her friends and a doting mum, a rich white cake and gifts, she glows in her birthday photos.

Abeba pulls out a photo of herself in full make-up and intricate shuruba. “Use this. I don’t look good today… don’t take my photo. Take me if you want,” she laughs, not quite joking.

There’s just that fleeting moment of doubt and insecurity before she goes back to her confident and chirpy self.

“I will stay (in Dubai) forever if I like it. I’ve been talking to people who have come back from the Gulf. I understand the place. In two months I can learn the language.”

Does she plan to speak to the employer before she travels?

She looks nonplussed. “I don’t even know who will pick me up from the airport, or whose house I will work in.”

The uncertainty is still worth the risk for Abeba. “I want to escape.”

As we cross the road from her home to the waiting car, a lady from the neighbourhood stops. She has a story too. Someone’s missing and she needs help tracking her down in Dubai.

This would happen a handful of times, people lost, people in search of someone… people floundering.

Previous: The ban is a blessing... For the traffickers in Ethiopia

Cases on the rise, Ramadan round the corner: Domestic Workers’ plight of urgent concern

Sexually harassed and deported for ‘running away’