You can’t walk a yard in migrant-sending communities without another fraud-agent story popping up. And not one person surveyed migrated legally, grassroots trainers say.

In the concluding part of the series we look at the small and not fully efficient ways in which different stakeholders are attempting to build trust.

It all boils down to whom they distrust less. The agents or the government?

You can’t walk a yard in migrant-sending communities without another fraud-agent story popping up. And not one person surveyed migrated legally, grassroots trainers say. “They think we are there to spy on them for the government, to find out if they are receiving money from Saudi. It takes a long time to build that trust.”

Alok, Sanjay (part 1) and Anil Verma go from village to village in several districts of UP, to hold discourses on safe and regular migration, and it has been anything but easy.

“We sat with those in distress, helped them file complaints or claims… the only way to reach aspirants. Every day we have to tweak our modus operandi, improve the information pack… there’s so much ignorance on the kinds of visas, the procedures etc.

“They first thought we were either fraud agents or that we were ‘Modi-Yogi’ people,” says the duo who cover Lucknow and Barabanki. 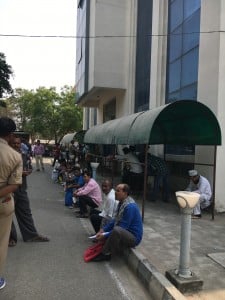 A steady crowd gather every morning at the emigration offices to process passports and visa work.

The Indian Prime Minister Narendra Modi and the Chief Minister of UP Yogi Adityanath are viewed with quite a bit of scepticism by much of India’s minorities and marginalised (religious and caste) due to their majoritarian right-wing politics.

“A place like Bareti, for instance, is 70% Muslim. We have to get them to trust us. So we started talking to the pradhans (village heads) and gaining their support and trust.”

“They get their [papers] before the flight... They have left their village [...].  By that point, the decision is irreversible.”

It’s been a slow and uphill task, but one that has provided learning experiences for the trainers as much as for the communities they work in.

“The general feeling we get is that they see no hope here, no chance of getting out of the cycle of poverty. They all have large families with just one or two people working.”

The realities of migration are far removed from what printed leaflets can cover.

Anil is with the Voice of Labour organisation and a member of the Bhawan Nirman Karmakar Majdoor Union (BNKMU). While the experiences of the aspirants in his jurisdiction (Sultanpur, Pratapgarh and Amethi) is similar to that of Alok’s, the profile of migrants is different.

“There has always been a steady stream of migrants to the Gulf. But since 2008, the numbers have increased. While it used to be predominantly Muslims, now people from the dalit (categorised as lower castes) community go too.”

They spend anything between Rs200,000 and Rs350,000 before they leave. That is significantly higher than what we hear is spent in predominantly Muslim communities.

A hard to break collusion

In their experience, not a single person went through a registered agent. “When we speak to the registered agents, they say they haven’t seen any big demand from aspiring migrants, but unauthorised agents say there are lots of visas. So clearly there is a collusion between the two.”

“They get their visa, contract copy and passport hours before the flight when there is no time to review or challenge broken promises. They have left their village and are put up in a hotel – on their penny – in a strange city with an international airport.  By that point, the decision is irreversible.”

It’s not that there are no successes, it’s just that they're few and far between and success itself is defined in very narrow and immediate terms. 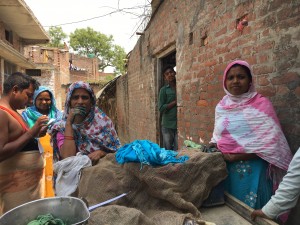 Every family has a member working in the Gulf, and the women left behind earn a pittance for their dyeing and embroidery work.

“They keep sending money home. The worker is not aware that they are spent almost immediately on basic needs and indulgences. They are part of large joint family units, and the money is usually sent to their father or brother, and not to their wife,” says Anil.

Because the women, be it Muslim or Hindu, do not go out alone or interact with men outside of their family, even when they do receive money directly they depend on someone else to collect it.

“The workers dream that it has been saved. When they come back, they realise that they have to go back again,” he says.

For these workers from India, as in the rest of the world, affordable smartphones have been a lifeline. Facebook messenger and IMO, he says, play a crucial role in breaking the cycle of isolation and misinformation, even if it comes a tad too late.

The pre-departure trainings that these trainers impart do address all of this. But financial literacy, like all literacy, has to be a continuous learning process.

The BNKMU is trying to garner more support for the forum Pravasi Samik Adhikar that focuses particularly on cross-border migrants.

The forum brings together trade unions, NGOs and individuals, and may actually succeed in gaining the trust of these marginalised communities, but it is early days.

“We are not commodities to be price competitive”

Vivek Sharma is the Protector of Emigrants (PoE) for UP. The concerns of the government official reflect that of the trainers.

“UP is the number one state when it comes to ECR passport holders migrating to the Gulf. The second is Bihar.” 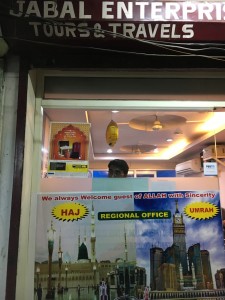 The travel agency that Shan (part 2) runs in Lucknow. He is entrenched in both the community that migrates and the network that helps migration. And now awaits the conclusion of a rather expensive process to register as a recruitment agent.

Both of these states are highly populous, not very well-developed,  and have poor human indices and high social inequalities. Earlier it was Kerala, Tamil Nadu and Punjab.

“When you reach a certain level (of development) you won’t go for low-paid, low-skilled jobs. The comparative cost advantage is not in favour of migration,” he explains.

“The level of wages in absolute terms is a reason [to migrate] but comparative levels also matter. People in States where the level of wages is not too low compared to to what they can earn abroad have a lower propensity to migrate. A small difference between the two [wages]cannot induce him to go for the job abroad. The difference between the two wages needs to be significant enough in his view to make him go for a job abroad.”

He sees unauthorised agents as the biggest problem to contend with.

“A registered agent goes through a thorough process before they can set up shop and operate. He needs to be a graduate, no criminal records, a Rs50,00,000 bank guarantee, and several other supporting documents.”

These high costs do make it difficult for a lot of agents to regularise. A new scheme was introduced where, with a bank guarantee of Rs800,000, you could recruit 100 workers.

There are currently 19 registered agents in UP, and 17 Mumbai and Delhi-based agencies that have branches here.

The PoE doesn’t believe in multiple layers of licensing, something countries like Indonesia have tried.

“There’s no room for subagents. It will be very difficult to manage. We have had a training for agents and CSOs and are now using mass media to reach remote areas.”

Currently, all legal recruitment of Emigration Check Required (ECR) passport holders should go through the e-Migrate system, where aspiring workers, employers and agents must all register.

Sharma says there are three main ways in which unauthorised agents function, bypassing the e-Migrate system and other checks and balance that are in place. “They charge the worker and then send him to an agent; or they do an individual application because they understand the process. Individuals can apply for jobs too, but the employer has to be registered on the system, visas and contract attested by the embassy in the destination.”

The third - and ‘real fraud’ according to Sharma - is sending workers on the wrong visas. “Tourist visas… forcing workers to work in captive environments because they are illegal there, too.”

He says the agents complain the market is down. Maybe because of the recession and also because the system has been tightened. Agents also complain about skill-specific minimum wages, saying it makes our workers less competitive.

“We are not commodities to be price competitive,” he says.