In one-to-one interviews and focus groups, female migrant workers in Qatar, Kuwait, and Bahrain recounted their experiences with violence in the workplace and how they navigated formal and informal grievance mechanisms. Through their insights, we aim to provide a better understanding of the current status quo and offer recommendations to prevent and improve government response to gender-based violence. Using Feminist Participatory Action Research methods, the report’s findings and recommendations are predominantly those of the participants.

Ages 23 to 42, the women who shared their migration experiences in this study hail from India, Sri Lanka, the Philippines, Benin, Guinea, Kenya, and Ethiopia. The stories of these 24 women are almost repetitive in their narratives of violence and abuse.  However, their understanding of what they’ve been through, their reactions to it, and the support systems at their disposal vary.

Recent domestic worker laws and efforts to reform the recruitment industry have taken place in both Kuwait and Qatar. Bahrain partially incorporated domestic workers into its labour law in 2012, and recently established a unified tripartite contract. Countries of origin have also advanced recruitment reforms and critical pre-migration interventions over the past decade.

Yet our conversations with migrant women indicate that exploitation remains rife, and even their most basic rights are not safeguarded. Women most commonly report non-payment of wages, overwork, physical and sexual violence, and restricted communication and mobility. Women are not only ineffectively protected from these abuses, but they also face systematic obstacles to redressing them.

Administrative grievance procedures specific to labour disputes and domestic work are an important step towards reducing the bureaucratic and financial burden associated with court cases. However, these mechanisms remain obscure and inefficient, and are not sufficiently sensitive to the needs of domestic workers and other migrant women. The lengthy time required to obtain any kind of remedy – even a ticket to return home – can result in massive financial and psychological costs. Many women who leave exploitative conditions simply “want to go home” because morale in the system is so low, and the psychological impact is so great.

The kafala system compounds these barriers: the system is so rigid that women confront impossible choices when seeking any kind of formal or informal remedy. And because their visa and legal residency are tied to their employer, when they challenge abuse, they risk defaulting on debts incurred for their migration and often their families’ primary source of income. For this reason, women often endure degrees of abuse, such as overwork and isolation,  so long as they are paid their wages.

Kuwait and Bahrain provide formal government shelters for domestic workers, which can make the decision to complain against an employer slightly easier, but Qatar does not yet have an equivalent facility

Embassies and community groups provide critical support to female migrant workers in the form of legal aid, rescue, and advice among other services. However, their important work can only have limited impact without the commitment of destination countries to enforce and reform their laws. Only destination governments have the jurisdiction and the capacity to prevent violence against the hundreds of thousands of migrant women working in their countries.

The experiences of the women we interviewed support leading critiques of the ‘safe migration’ paradigm:

These findings bare critical policy implications. While we provide recommendations for improving services and support systems to migrant workers, the situation of migrant women will only meaningfully improve when significant reforms are made to the labour migration and employment regimes in the three destination countries. As the experiences of the women we interviewed indicate, these regimes produce risk and vulnerability regardless of pre-departure interventions and post-arrival embassy support.

Though this research focuses on Qatar, Kuwait, and Bahrain, its findings can be useful to understanding dynamics in the Gulf region at large given the comparable recruitment and employment processes, as well as the similar social and cultural environments. 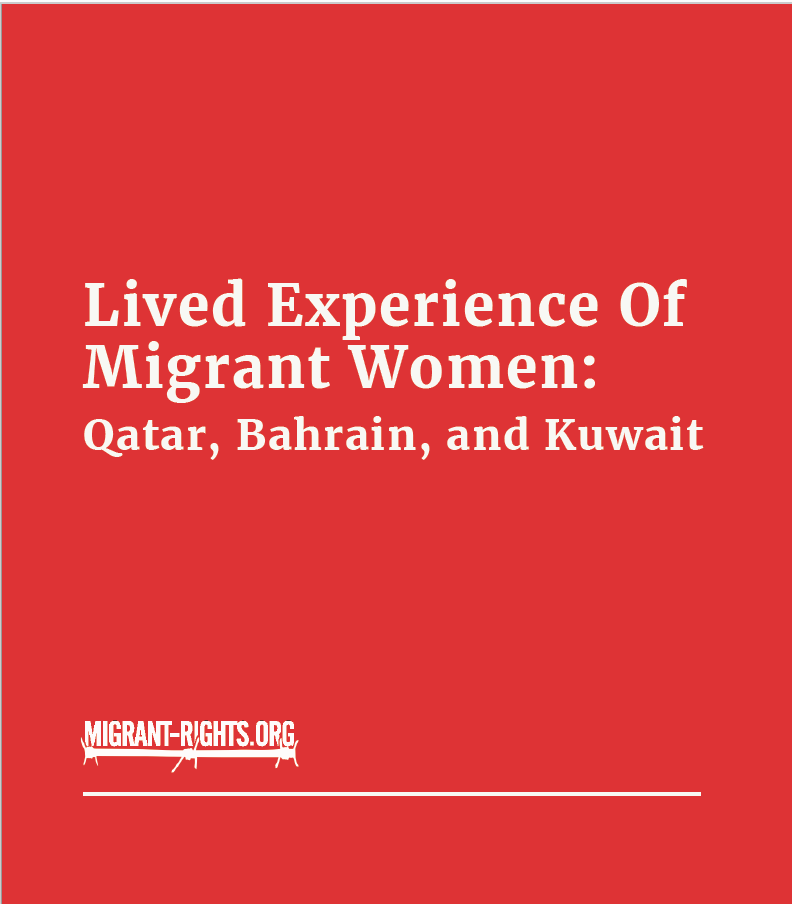 The report was produced in coordination with the Global Alliance Against Traffic in Women (GAATW)'s “Power in Work and Migration: Documenting the Lived Experiences of Women Migrant Workers” project, which supported research in both countries of origin and destination. The global report can be read here, alongside links to partner country reports.

An estimated 677,000 documented domestic workers live in Kuwait, accounting for 27% of the total migrant workforce in Kuwait’s private sector.

In Bahrain, 75% of the officially registered 91,852 domestic workers are women, and migrant women account for 65% of the total female labour force.

The proportion of female migrant workers in all three countries is likely much larger than official statistics indicate, as these figures do not account for the significant undocumented population.

Bahrain must not retain its Tier-1 status in TIP report

In one-to-one interviews and focus groups, female migrant workers in Qatar, Kuwait, and Bahrain recounted their experiences with violence in the workplace and how they navigated formal and informal grievance mechanisms. Through their insights, we aim to provide a better understanding of the current status quo and offer recommendations to prevent and improve government response to gender-based violence. Using Feminist Participatory Action Research methods, the report’s findings and recommendations are predominantly those of the participants.