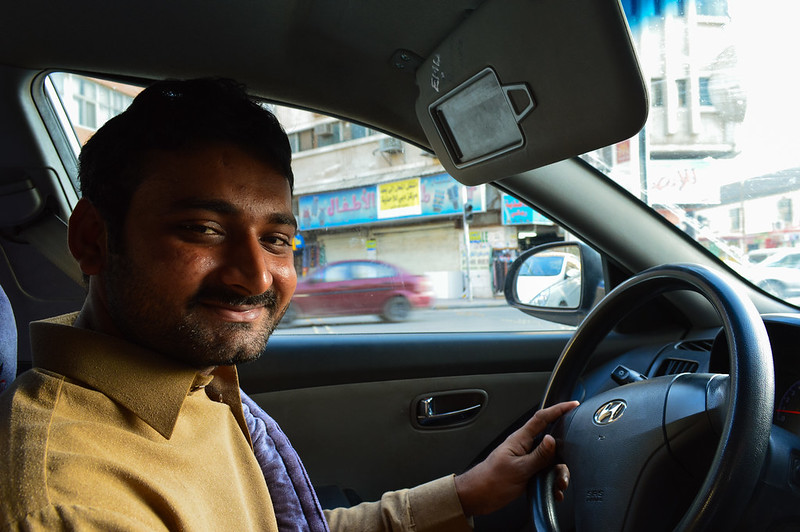 According to official statistics, while the total number of foreign workers in Saudi’s private sector decreased by .6% between the first quarters of 2019 and 2020, the number of migrant domestic workers has increased by 27.7% over the same period – from 2,863,697 to an all-time high of 3,658,730.

A possible explanation for the sharp rise in the employment of domestic workers and drivers could be due to visa falsification. According to sources Migrant-Rights.org spoke to, Saudi businesses reportedly hire office assistants, accountants, and other office employees under domestic worker visas to save on work permit fees.

Since 1 January 2018, the Saudi Ministry of Labor and Social Development imposed a monthly fee on private sector employers of foreign workers. Currently, employers pay SR700 (US$ 186) a month (SR 8,400 / US$2,239 yearly) for each foreign worker they employ, which can be costly for small businesses. A domestic worker visa, in contrast,  can be obtained for a one-time payment ofSR2,000 (US$ 533). And according to Musaned, recruitment costs for male drivers start as low as SR500 (US$133).

In a country where women were not allowed to drive until 2018 and social norms still exclude many from the option, almost two million male migrants work as full-time private chauffeurs.  Personal drivers make up more than 55% of the total domestic worker population in Saudi Arabia, and 70% of all domestic workers – which include security guards, cooks and gardeners, among other occupations – are male.

Since lockdowns were implemented in late March across several parts of the country, job security and accommodation have become uncertain for domestic workers like Mohammed Dawood, an Indian driver working in Riyadh.

According to Saudi’s domestic worker law, employers are required to provide accommodation to those under their sponsorship; due to the nature of the job, this accommodation is usually a worker’s quarter attached or in close proximity to the employer’s residence.

“The family I work for has also been uncertain about their own work, as the husband is a partner in a business and his work was affected a lot,” says Dawood. “But they are considerate employers so even though I wasn’t working for more than two weeks, they let me continue living in the quarter attached to their villa.”

They did not, however, pay Dawood his monthly SR1800 salary during this period. Instead, he received a total of SR2000 for April, May, and the first half of June combined. But Dawood doesn’t complain.

“I didn’t have too many expenses the past few weeks because I had a roof over my head and food to eat but I couldn’t send enough money back home,” he says. “But I knew that as soon as things got better, I’d have job security again which is what matters.”

Javed* was just 21 when he came to Jeddah 15 years ago to work as a cook and housekeeper. He has been with his current employer for the past six years. His problems began before the pandemic when his employer’s business ran into financial trouble.

“I was told last year that it is getting much worse so they will either reduce my pay or I can find something else to do. Then, the lockdowns started and I am still living there and working but significantly less than before. They have only paid me for one month, SR2000, since March and are asking me to figure out if I want to find another job or leave.”But jobs are hard to come by, and with commercial flights to Pakistan still suspended, Javed has reached out to his embassy to try to reach home but has not heard back from them yet.

For 27-year-old Filip too, problems also started long before Covid-19; The Filipino migrant had been working for his Saudi employers for two years and was contracted to receive SR2500 a month. But between October 2019 and February 2020, he was paid for only two and a half months.

“Because there was no work to do March onwards, I was sure that I am hardly going to get paid for the next few months. In May, I told my employers that I was quitting. For now, I have a friend [that I am staying with] who has his own car that he said I can drive as a private driver at night when he doesn’t need it which is what I have been doing for the past three weeks. If the work picks up, I will try to stay here, otherwise, I will go back. I need the consulate’s help because my passport is still with my old employers and I think they have filed a ‘huroob’ (absconding charge) against me. But the consulate hasn’t been helpful yet – I am trying to find a connection with a consulate employee because that will probably help.”

“Embassies prioritise families and unmarried women because their concerns are highlighted more and if they suffer, the media back home talks about it more.”

Even though domestic worker laws in Saudi Arabia require that workers are paid their contracted wages at the end of every Hijri month of the Islamic calendar, it is easy for the law to be broken and go unchecked.

While this may hardly be a new issue, a crisis as unprecedented as this pandemic highlights the overdependence of domestic workers on their sponsors and their vulnerability to their employer’s financial fortunes.

Harith, a 33-year-old driver of Sudanese origin working in Dammam, was asked by his employers to move out and find another place to live a couple of weeks into the lockdown.

“On my weekly off, I go visit my cousin who lives in an apartment he shares with three other people and I was told to go stay with him for some time because they were worried I would catch the virus – even though we were under complete lockdown, so I couldn’t go out any more than they could,” Harith says. “I paid SR200 a month to stay there till the lockdown was lifted a few days ago.”

His employers paid him a sum total of SR1500 for this period, which lasted between late March and early June. His contracted monthly salary is SR 1700.

As with most other workers, Harith’s family back home relies on the remittance he sends each month to meet their basic needs, and they were directly impacted by his employer’s decision.

“I could only send a third of what I typically do back home but I am glad I got paid at least something for this time period even though I wasn’t working,” he says. “I think they felt the responsibility because they sponsor my visa and if I wasn’t able to take care of myself at all, there could potentially have been some legal consequences.”

After the lockdowns were lifted in June, Harith returned to work again but his employers want him to continue living with his cousin for the foreseeable future.

Harith has been fortunate to find a substitute accommodation, but shifting into an already cramped apartment in the middle of the pandemic is risky.

“...if I would have tested positive and have had to go under quarantine, I could have lost my job.”

A survey in May revealed that 77% of individuals who tested positive- for COVID-19 were non-Saudi residents. One likely factor for the disproportionate impact on migrants is the very densely populated apartment complexes and neighbourhoods that house many low-wage migrants.

And although employers are legally obligated to provide healthcare to domestic workers, and though Saudi Arabia provides free COVID-19 testing and treatment for everyone including undocumented residents, uncertainties and lack of access to information still create an obstacle to medical care.

Job losses across sectors and remote working have also impacted male domestic workers and drivers of private households in particular. Mahmoud,* a 30-year-old from Pakistan, works in Mecca and used to ferry his employer’s wife to work and back.

“I was driving for one family for the past four years and have been in Saudi Arabia for the past ten. My main job was driving my employer’s wife to and from her work, which was located in Jeddah, five days a week. I haven’t had any work since late March because she wasn’t going to work any longer and everything else in Mecca was also in lockdown. They paid me in full for March but for April and May, they paid just SR500 (of the contracted SR2700) and said that I wasn’t working but they know I support my family back home so they wanted to support me in that.”

He was told that July would be his last working month.

Hassan F, 30 from India, works as a security guard for a Saudi family living in Mecca. He says he had a fever for two weeks straight through April and even though he wanted to get tested, his employers would only give him three Paracetamol tablets to take a day to suppress his fever and ask him to continue doing his job.

“I worked fewer hours and they said I could rest whenever I needed to but they said that there was no need to go to the hospital unless I was feeling extremely sick,” he says. “And if I would have tested positive and have had to go under quarantine, I could have lost my job.”

Many men working as domestic workers who have lost their jobs and are awaiting repatriation flights say that their embassies are not prioritising their concerns.

“Embassies prioritise families and unmarried women because their concerns are highlighted more and if they suffer, the media back home talks about it more,” says Dawood, when asked if he had considered seeking help from his embassy. “I don’t think people know that most domestic workers here are drivers and we are all men, I think.”

“I am planning to move back to Pakistan – the situation here is very bad and the taxes are too high now. I keep calling the embassy [consulate] and even visited once but they didn’t let me in and said that I need an appointment. I want a flight back home as early as possible because it is too expensive to continue living here,” says Mahmoud.

*Some names changed to protect identities