Migrants in Bahrain face an eviction crisis amid Covid-19 pandemic 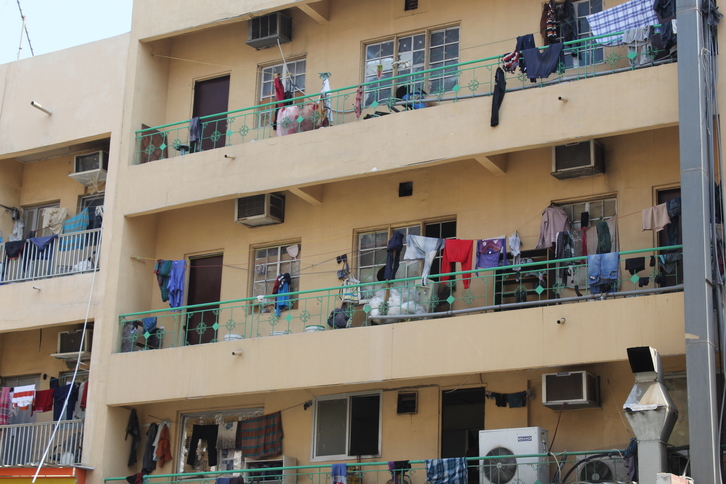 As the pandemic worsens Bahrain’s already ailing economy, many migrants have defaulted on their rent due to furloughs, income reduction, and job loss.

Article 43 of Bahrain’s labour law allows employers to reduce wages by 50% in cases of Force Majeure:

“…if the worker showed up at the workplace and was prevented from executing his work for reasons of force majeure beyond the employer’s control, the worker shall be entitled to half his wage.”

According to Bahrain’s labour law, there is no obligation for employers to provide accommodation to migrant employees (except for those working and living in areas "far from urban regions"). Employers are only obligated to provide housing provisions if stipulated in the work contract, which may be in the form of either an allowance or accommodation facilities.

Even with the gradual resumption of most business activities in Bahrain, many workers still face a bleak future. For some migrants, especially those in the service sector, once monthly wages are now commission-based, linked to sales or service provision.

Erlinda, a salon worker from the Philippines, told Migrant-rights.org, “since Corona we report to work on-call only. If there’s an appointment we come, our salary depends now on service, it is not a basic salary.

“I don’t have enough customers now and I have no allowance for rent, I don’t know where I can find the money to pay for my room and the landlord is always stressing me out for rent.”

According to those affected and social workers MR spoke to, landlords were generally lenient about unpaid rents at the start of the pandemic, in part because the government waived electricity and water bills for three months.

The waiver has since been renewed for another three months but only for Bahraini nationals. A migrant worker called out the unfair exclusion of non-citizens from these protective measures in an open letter to the Gulf Daily News:

“In view of the continuous struggle against the impact of the coronavirus pandemic, I hope that the Bahrain government will also extend its support to expatriates, with regard to the waiving of electricity and water bills for the next three months. Unlike Bahraini citizens, expatriate residents do not receive government support to ensure that their salaries are secured and paid on time; no bank loan payment extension; no housing privileges; no medical support; and no government allowance.”

From 2016 to 2019,Bahrain has gradually removed electricity and water subsidies for non-nationals. Their annual usage costs are approximately nine-times that of Bahraini users. Many complain that electricity and water bills are taking a big chunk out of their already low wages, especially given that there is no minimum wage for private-sector workers and the labour law does not require employers to provide housing.

According to the social workers, during the height of the crisis government authorities were reluctant to accept complaints from landlords for unpaid rents, and would generally advise them to be patient.

But six months into the crisis, landlords, who are also dependent on rental income, have started to take legal action to evict tenants in cases where tenancy contracts exist. For landlords who rent out their rooms irregularly, they have resorted to threatening the tenants or cutting electricity supply.

Kevin, a Kenyan migrant who used to work in a hotel has been on unpaid leave since the crisis began. He was not able to pay his rent for five months. Although the landlord waived off his rent dues, he was asked to cover the electricity and water bills. But without income, even that was unaffordable. He and his wife were forced to leave their place and rent out another room with the assistance of community groups.

The landlord decided not to take legal action against them for unpaid rent. But others were not as lucky, according to social workers in Bahrain. Courts are increasingly ruling in favour of the landlords, and those evicted find themselves in limbo, unable to pay fines or challenge the travel bans imposed on them because of their dues.

Non-citizens across economic classes have been affected, leaving even middle-income workers and those with families on the brink of homelessness.

A social worker from Indian Community Relief Fund told MR, “low-income workers can manage to rent out a room for BD20 and they can live in crowded accommodations to save costs, but those with families pay higher rents and have higher bills, and with the pandemic, they are now struggling...we are getting more calls for help from them.”

It is not only owners of private property who are evicting tenants.

In a callous campaign to decongest overcrowded labour accommodation and force workers out, Bahraini authorities have cut off electricity and water to hundreds of worker accommodations in peak summer (temperatures reaching 45°C).  In the 61 days since the start of the campaign, the government has disconnected electricity in 532 buildings. No alternative housing has been provided to these workers.

In April, the government announced that it had begun to relocate people from crowded accommodation to public facilities such as schools, but such efforts have been limited and only about 9,000 labourers were relocated, out of the tens of thousands of workers who continue to live in overcrowded dilapidated accommodations.

In June, Muharraq’s Municipal Council also passed a proposal to cut off electricity and water supply to crowded labour houses in the city. A Bangladeshi worker told MR that government authorities cut the electricity off in his shared accommodation and he was forced to temporarily move into another more crowded accommodation with his friends.

It is vital to guarantee everyone the right to remain in their homes or have access to decent non-crowded housing and affordable utilities, especially during a global pandemic. The Bahraini government must provide a moratorium on all evictions, remove travel bans on those with court judgments against them and provide rent relief for workers who have lost their incomes due to the Covid-19 pandemic.

Legislation must also be enacted to ensure employers are responsible for providing decent accommodation for migrant workers. If (as it is the case under kafala) the state has decided to delegate the responsibility of migrants to private employers, at the very least they must be responsible to provide decent housing to their workers.