It is crucial to highlight that working without a sponsor does not always entail better living and working conditions. As MR previously reported, Flexi-Permit holders were rendered vulnerable in other ways when compared to those under a kafeel.

As part of the country’s recent labour reforms, Bahrain's Labour Market Regulatory Authority (LMRA) has officially launched its new “Labour Registration Program” effective 4 December 2022. According to the LMRA, the new initiative will replace the contentious Flexi-Permit programme, which was cancelled at the end of October this year.

The LMRA will appoint accredited private companies as labour registration centres where migrant workers can apply for a “vocational work permit”. The centres are required to electronically register and update workers' data on a regular basis, including personal information, bank account information, and authorised professional activities. The data is then sent to the LMRA for approval. 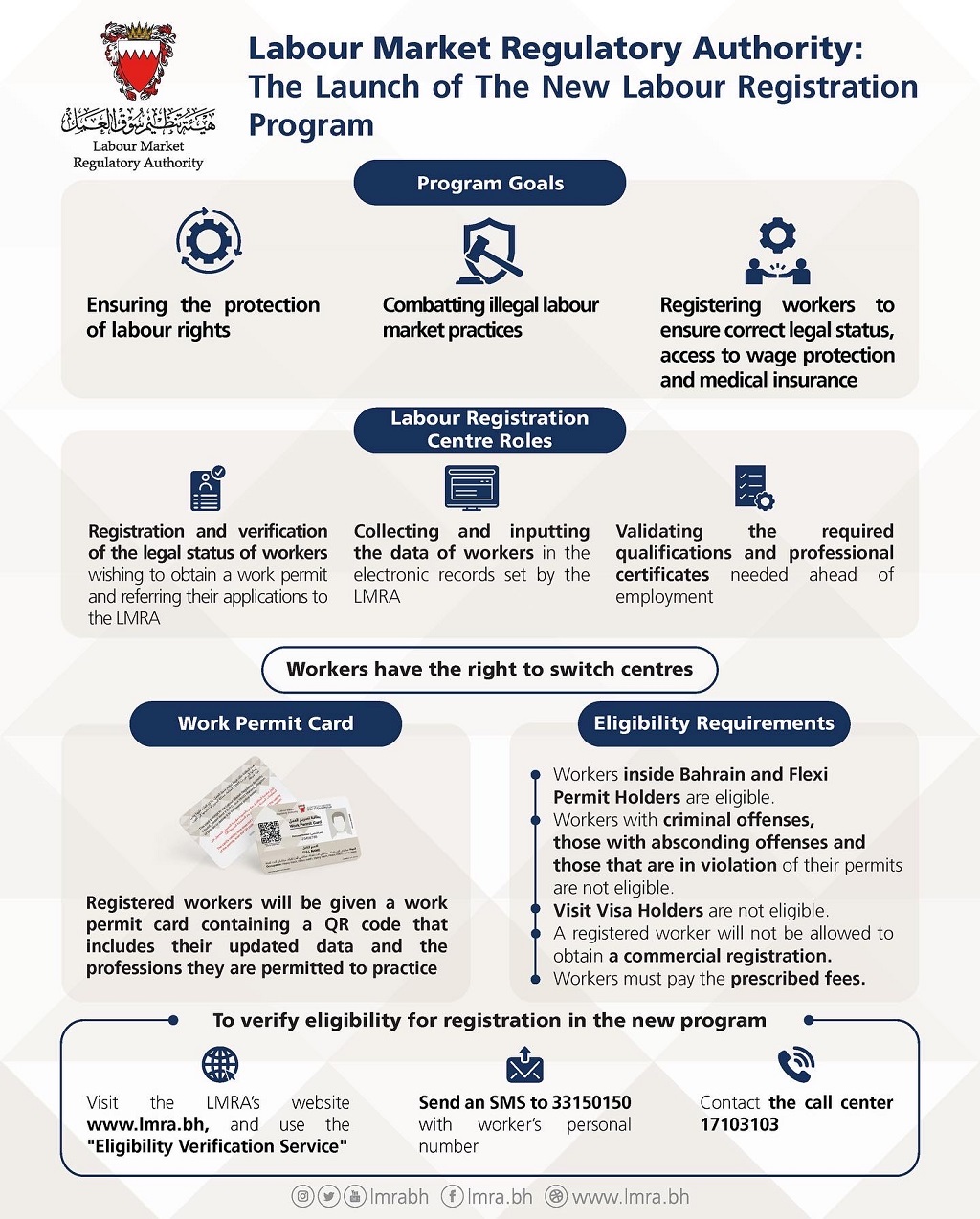 According to the LMRA,  vocational work permit holders will receive a work permit card with a QR Code that contains information on the professions they are permitted to practice, the permit's validity, health insurance information, and the name of the centre that registered the workers.

The only workers allowed to apply for the vocational work permit are former Flexi-Permit holders and “irregular” workers whose permits have expired or were terminated by the employer. However, unlike the Flexi-Permit scheme which was available to all undocumented workers, only workers who became irregular before the new permit’s decision on 27 October are allowed to apply. By the time the decision went into effect, it was estimated that there were between 90,000 and 110,000 migrants in Bahrain with irregular status, who would theoretically be eligible for the scheme.

Current Flexi-Permit holders have until 17 February 2023 to change their Flexi-Permit to the vocational work permit. According to the LMRA, the fees for the remaining Flexi-Permit period will be deposited into the workers' accounts.

Those with criminal offences, absconding cases, and visit visa holders are not eligible for the vocational work permits. It is unclear if domestic workers will be included in the programme.

To date, the regulations have not clarified if the vocational work-permit holders are covered by the Labour Law. But, the LMRA claims “that the new programme aims to ensure the protection of labour rights”.

It is crucial to highlight that working without a sponsor does not always entail better living and working conditions. Flexi-Permit holders, as previously reported by MR, were rendered vulnerable in other ways when compared to normal workers under Kafala.

The Privatisation of the Flexi-Permit’s application process

Previously, the LMRA was responsible for verifying and processing the applications for Flexi-Permit workers, the new initiative will designate that task to the private sector.  In accordance with Resolution No. (1) of 2022 regarding assigning some tasks of the Labour Market Regulatory Authority to labour registration centres,  private companies can apply to become a labour registration centre if they have not previously breached LMRA’s regulations and can provide a suitable place to receive foreign workers wishing to obtain a permit to practise professional activities.

The centres refer workers’ applications to the LMRA for approval, after verifying the availability of qualifications or professional standards certificates necessary to practise professional activities. They are also obligated to notify the LMRA of any violations carried out by a registered worker and allow the LMRA’s inspectors to view all data held by the centre.

It is also unclear how the private centres will profit. As per the resolution, the centres must not deduct “any amounts or obtain any benefit or advantage for any of the services stipulated in this decision from foreign workers” and can only charge the fees set out by the LMRA. Furthermore, labour registration centres that go bankrupt or lose their commercial register for any reason must immediately inform the LMRA, and workers registered under that centre must then register with another centre.  (For more on the role of labour registration centres, see here)

It remains to be seen how the vocational work permit will function in practice, as few specifics about the new scheme are currently available. The LMRA has insisted that holders of vocational work permits are unable to obtain commercial registration, which may imply that workers will always be required to work for an employer rather independently, as was possible under the Flexi-Permit. It is important to remember that one of the primary reasons the Flexi-Permit was cancelled was the pressure exerted by Bahrain's Chamber of Commerce and Industry, which opposed the scheme due to the perceived competition between freelance migrant workers and Bahraini businesses. The LMRA has been working closely with the Chamber of Commerce and Industry with regard to the new labour registration program.

Migrant-Rights.org will update this article as new information becomes available