My name is B and I currently live in Kamareddy, India. I have worked for the construction company Fundament SPC in Bahrain for more than 3 years. Last year, the company owed me and my co-workers up to 8 months of due wages.

When we were in Bahrain, we struggled for many months without food and money while we were waiting for the authorities to resolve our case. In July 2020, we reached an agreement with the company, the Indian embassy and the Ministry of Labour to receive 35% of our pending wages upfront with return flight tickets, on the condition that the remaining amount would be deposited in our bank account in 3 months time. We agreed to the settlement (see attachment) and most of us returned to India in September 2020.

It has been 5 months now and we still did not receive anything from the company. I called the company manager several times in the past couple of weeks, each time he is giving me the same answer; “I don’t have the money now, don’t call me.” I have been also trying to reach out to the official at the Indian embassy who handled our case, but she is not picking up our calls nor responding to our messages.

Two months ago, I had a motorcycle accident and injured my right hand. I’ve not been able to work since and I can’t even afford treatment. I have two children to support and getting this money back will help me get back on track right.

When we were in Bahrain we protested at the Labour Ministry many times, the Ministry assured us that we will receive our wages. But now that we left Bahrain no one is responsible. The company owner has faced no repercussions and the company is still operating as if nothing happened.

I am pleading to the authorities in Bahrain and the Indian embassy to push the owner of the company, Ali Jawad Al-Derazi, to immediately send us the remaining of our wages.

See below copy of the agreement: 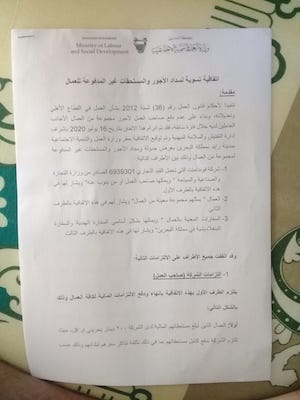 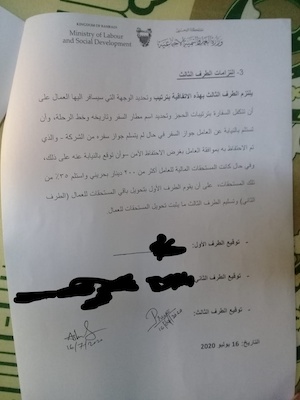 View all Letters to MR