Subject: Unpaid and homeless in Bahrain

My name is K. and I’ve worked for Security Solutions Co WLL for two years as a security guard on a salary of BD70 per month, which included accommodation and food allowance. I took a loan of  BD350 to pay for the recruitment fees that landed me this job.

The security company, which is based in Amwaj, did not pay me for my labour during the months of October and November 2020. When I told my employer that my two-year contract was ending in December 2020 and that I wanted to go back home for vacation due to the responsibility I have for my two sons who depend on me because I am a single parent, the employer terminated my visa in December without settling my due wages and giving me end-of-service benefit.

The company even refused to provide me with an air ticket to go back home and at the start of this year, the sponsor told our labour camp boss to remove me from their accommodation. I became homeless overnight, I am now only depending on friends for accommodation.

I am not the only person with problems in this company, many workers in the company also have problems like mine. The company boasts that its recruitment process is based on “Strength in Diversity” but in reality, it is "Strength in Discrimination", because the company pays workers based on their nationality – Asian workers are always paid higher than Africans for the same work, the managers are also racist towards us.

The African workers in the company don’t get a single day off.  During the two years in which I worked with the company, I only got the day off when I got sick. We worked non-stop for 12 hours a day, sometimes our transportation came late and we ended up working 16 hours without overtime.

It was only when I went to the Ministry with a social worker that the authorities considered my complaints, but even when they registered my complaint, I never heard from them again.

As the one-month grace period after visa termination was approaching. I just decided to call it a loss and go back home without my due wages because I wasn't working, I am just surviving without any money, food, transport, accommodation.

After several attempts, the LMRA finally pushed the employer to purchase me the ticket. No one considered my due wages and end of service benefit, but it’s fine because I just can’t live like this anymore. As of today, I am still waiting for my return ticket and completely dependent on others for basic necessities.

I am sending this letter to request the authorities in Bahrain to get my due wages and flight ticket from the employer so I can see my family back home. 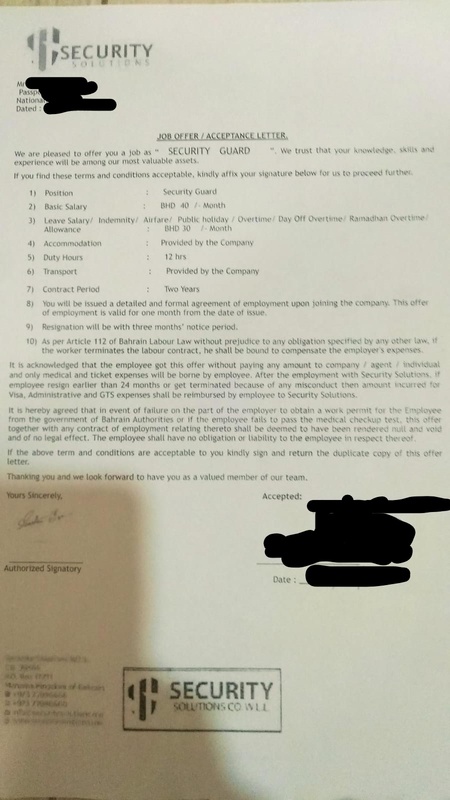 Above: The company’s contract, which, in violation of the labour law, includes indemnity, overtime, holidays, leave salary, and other provisions as a monthly allowance of 30 BD.

MR has reviewed K.’s contract and communication between K. and the company's management requesting settlement of dues and air ticket.

MR has reached out to Security Solutions but received no response at the time of publishing.

MR will forward this letter to the clients of Security Solutions, which includes The Art Hotel & Resort (Rotana), Zain Bahrain, and Bahrain’s International Airport.

View all Letters to MR