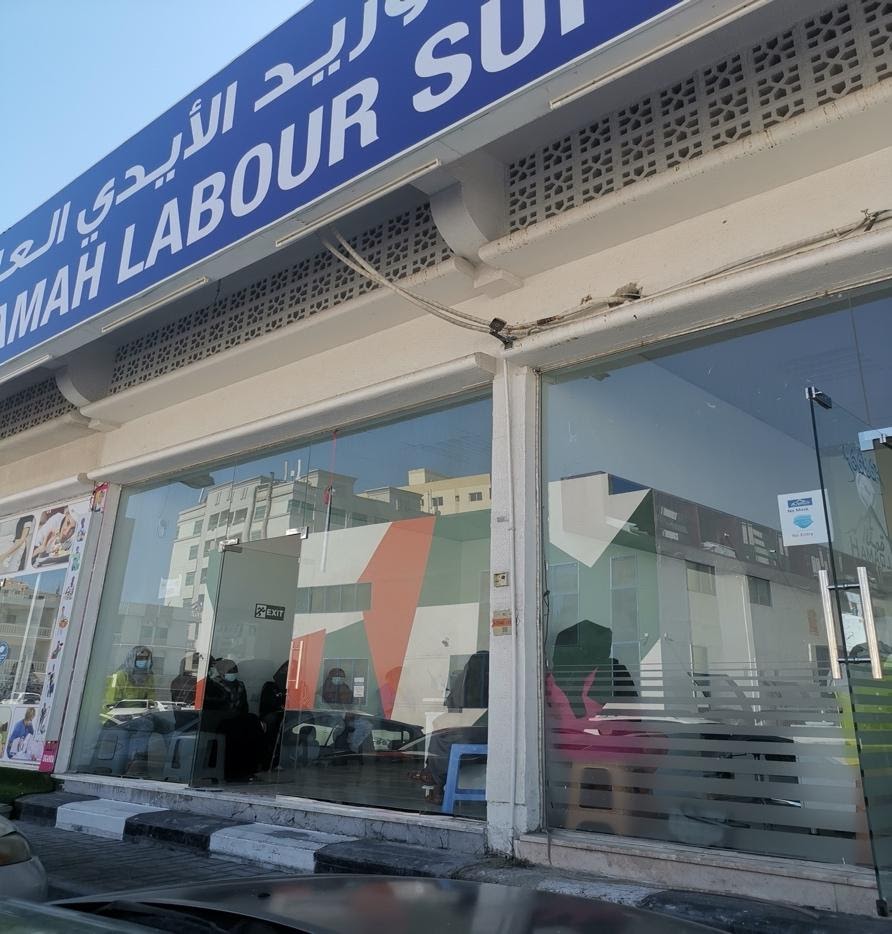 The dependency on domestic workers, especially live-in, is on the rise. But supply to meet this demand does not always flow through regular channels, and ethical recruitment considerations take a backseat to costs and convenience. The process designed by the recruitment agents can only be described as organised chaos. Organised enough for the employer and chaotic for the worker. In the UAE, the ease with which visit or tourist visas can be converted to work visas creates a particularly muddy market for domestic work.  These issues persist despite government-affiliated Tadbeer service centres intended to standardize domestic worker employment.

This piece explores how the sector works within this context.

Tucked between the Al Madinah Comprehensive police station and Lulu hypermarket in Ajman is a labour recruitment bazaar where the manpower suppliers have set up their business. These are small to medium-sized shops with glass windows and doors. Driving past, you can see women seeking domestic worker jobs wearing masks and seated on chairs. There are a couple of desks strategically placed to keep an eye on clients walking in. The women behind the desks usually wear abayas and are multilingual. The ones I spoke to were from Ethiopia, Sri Lanka and Uganda.

In 2017, the UAE announced it would streamline domestic worker recruitment through Tadbeer centres. Private agencies, except those in Free Zones, had until this March to obtain a Tadbeer license, switch to another sector, or shut down. The sizable license fee (DHS500,000), on top of the regulatory requirements, has kept many smaller agencies from seeking affiliation. Unbound by Tadbeer standards, these agencies could continue bringing in women on visit visas, an especially lucrative scheme for domestic workers from high-demand countries such as the Philippines, which until recently banned deployment to the UAE.

These ladies receive the clients. Once the initial courtesies are done away with, usually in Arabic, the client’s requirements are noted down. Every labour recruitment agency specialises in certain nationalities and recruitment fees are determined by the nationality of the domestic worker. Fees range from a hefty AED 17,000 (US$4,630) for Indonesians (despite an ongoing recruitment ban from the country of origin) to AED 12,000 (US$3,270) for Indian or Sri Lankan workers, to much ‘cheaper’ options that include Ethiopians at AED 7,000. (US$1,910) and Ugandans at AED 6,000 (US$1,635). Despite the large variances in recruitment fees, the salaries for workers range only between AED 1,000 (US$270)  for Ugandans and Ethiopians to AED 1,200 (US$330) for Indonesians and Indians. The legal minimum wage for domestic workers is determined by the origin country in most instances, as the UAE does not have a minimum wage regulation.

The clients, generally middle-aged couples (though often the husband does the hiring), are clear about their preferred nationality based on their past experiences or perceptions. Once they declare their preferences, including desirable skills such as languages or the ability to cook or take care of young babies, the desk manager summons the job seekers and they are made to line up in front of the desk, facing the manager and the client. They are asked to speak about themselves and answer prospective employers’ questions. At this point, they are also asked to remove their masks to show their faces. There is no CV or printed information to review. The job seekers do not get an opportunity to pose any questions to the ‘baba’ or ‘madam’. Once the customer chooses a ‘housemaid’, they can take her with them by paying a small deposit, as little as AED 5,000 (US$545), to ‘try’ her for a few days. At this point, the domestic worker is asked to quickly grab her personal things. She is also given her phone back, which had clearly been confiscated earlier.

Due to Covid-19 regulations, from March 2021 onwards the agency no longer brings all the jobseekers to the office every day. Women are taken to the office by rotation, while the remainder of the cohort stays back at the accommodation provided by the agency. Now when a client comes to the office, they can see some of the prospective employees or review videos of the other women with that particular agency. In the videos, the jobseeker is often seen wearing a uniform and answering the questions asked by her manager regarding her age, nationality, marital and family status, previous work experience, etc.

Diana* was asked to come from Kampala as quickly as she could.

“I contacted an agent in Kampala through a friend of mine and told him that I wanted to work in Dubai,” she says. “It was really difficult to make ends meet in Kampala. I have three children who live with my mother in a small town 100 miles from Kampala. They need to go to school.” Her husband is a small-time Coca-Cola vendor and makes just 20,000 Shillings (US$ 5.80) a day.”

“I had worked in Oman for two years for a salary of OR70 (US$ 182) a month, but Dubai was more promising as I could earn AED1,000 (US$ 273) per month,” she says, nervously excited. “So, I gave my passport to the agent without any hesitation, my visa was approved in just two days and the agent told me that my employer in Dubai has also been fixed. Without thinking twice, I borrowed some money and paid for my medical test, which included Covid-19, HIV, and pregnancy at a private clinic in Kampala.”

All the tests came out negative and on the 10 of January 2021, Diana was put on an Egypt Air flight via Cairo.

As she stepped out of the airport in the evening, she was expecting to be met by her employer but was instead received by an agent and taken to company accommodation where she was put up in a small room with five other women.  Since she had a negative Covid certificate, Diana did not quarantine. In fact, almost all the women who come are tested for Covid in their home countries, so none of them underwent a quarantine period.

As of January 2021, the UAE’s Human Resources and Emiratisation (MoHRE) authorities have shut down 250 domestic worker recruitment offices as part of a nationwide initiative to centralise recruitment through Tadbeer centres. So far 54 Tadbeer centres are in operation across the country. These centres are responsible for recruitment, placement, and live-out deployment (hourly work has been temporarily suspended). There have been mixed reviews around Tadbeer’s efficiency and customer responsiveness.  In another notable development, the UAE and the Philippines have signed an MoU bringing to an end the six-year domestic worker deployment ban placed by the latter.

“After a rather uncomfortable, sleepless night, I was woken up by a bang on the door,” she says. “In came the agency lady and took my phone away, handed me a set of uniforms. Morning tea and boiled rice in the afternoon was all we were given.”

The women are taken to the shop at 10 in the morning and they stay there till 10 at night with a small afternoon break.

Lamcy, also from Uganda, arrived in early March and is now living with her employer. “It is much better here,” she said. “We were 20 women in one room with one toilet. At night, we were sleeping on each other’s legs. With the morning tea, which had no milk, I was only given a slice of bread. In the afternoon, we had boiled rice with no salona,” she recalls. “The room which 20 of us were sharing had no windows. The only way we could make out day or night was from the light coming in under the door.” Lamcy didn’t have to go to the agency’s office every day. Her agent recorded a candidate video where she talks about her previous work and skillset. “Some women would go to the office (recruitment agency) one day and the next day they would be in the room. We were taken by rotation. There would often be more than 16 women in the room at one time. There are too many maids seeking jobs right now! I didn’t know all this before I came here.”

While Diana hadn’t paid any money to the local agent in Uganda, Lamcy had paid around AED 1,800. Lamcy was lucky to have found an employer through the agency,  and her employment visa was processed through one of the Tadbeer centres. Once this paperwork is processed, the worker is covered under the UAE’s Domestic Worker Law.

In theory, permitting workers to convert visit visas to work visa provides a level of independence by allowing individuals to scout for a job that suits them, but this is not often the case in practice. Many workers who travel on visit visas often pay fees to multiple recruitment agents, at origin and destination, and have no protection under UAE law. Since their migration is considered irregular by origin countries, consular protection is also limited. Those who are unable to find jobs, or who are “returned” to manpower agencies during their trial period, face extreme precarity.

Take the case of  Dishani and five of her friends who had come from Sri Lanka through various agents on visit visas and are now struggling without a safety net. All of them had come here after January 2020. Unable to find jobs during the validity of their visa, they are stuck in the UAE without accommodation, passports, or enough money to go back home. The Sri Lankan Consulate isn't willing to provide shelter since the women didn’t arrive on work visas. They are currently sleeping in an open park.

“They have no place to shower or to use toilets. They go to the nearby petrol station or wait for the call for the prayer when the locked gates of a nearby mosque are opened,” a Sri Lankan migrant worker who was there in the park with them, explains.

The closure of private agencies that bring in domestic workers on visit visas may address some magnitude of the problem. But without vigilance, illicit recruitment is only likely to adapt to new circumstances, especially if converting visit visas to work visas remains a simple procedure. It is also important to underscore that the ease of acquiring visit visas to the UAE has the potential to be exploited by illegal recruiters, who can use the country as a hub from which to deploy people to other GCC states.