Her undocumented status and the power her sponsor wields have made it difficult for JMM to access support and justice. Qatari authorities must intervene to ensure she receives her full treatment, and that her sponsor is held to account.

JMM, a 27-year-old Kenyan woman is scheduled for surgery at Doha’s Hamad General Hospital in November. This surgery is a follow-up to the one she had last year after sustaining debilitating injuries from weeks of physical abuse by her employer. Her employer (sponsor/kafeel) works for the police and has made it difficult for the police complaint she filed to carry through.

Her Qatar ID has expired, and without a new sponsor and an ongoing case, she would require Qatari government to step in. Without a valid Qatar ID, she worries her treatment may not continue as planned. Returning to Kenya is not an option as she would not receive the same level of treatment nor would she be able to afford it.

JMM shared her journal entries and voice notes with Migrant-Rights.Org, detailing the abuse she faced and the months following as she continues to struggle for some semblance of justice.

The journal entry can be read below in the photos shared by JMM from her early days of treatment and in its transcript, which has been edited only to correct spelling errors. MR also reviewed medical documents from the hospital and the clinic where she received physical therapy. The forensic report is not in her possession.

In her journal, JMM writes about the weeks of physical abuse at the hands of her employer and kafeel, an officer with the Qatari police of Saudi nationality. She sustained a spinal injury that cannot be treated now and an ankle injury that has been operated upon. After a few months, she was passed on to another employer, who in turn placed her with their friend. Once JMM felt she could trust the new employer, whom she found sympathetic to her, she confided in her. They then took her to the hospital. The social workers at the Hamad General Hospital helped her file a police complaint, which is a requirement to treat her.

After both outpatient and inpatient treatment, JMM has been sheltered at the Kenyan embassy and with members of the diaspora who have stepped in to support her.

The lawyer appointed by the embassy told her that the Shahaniya police station, where she had filed a complaint, had closed the case, citing lack of evidence. She has since given power of attorney to another lawyer and requested the case be reopened.

During this tumultuous period, and without her consent, the embassy received a nominal sum from the employer as a settlement of dues. JMM has refused to accept that as a final settlement.

She told Migrant-Rights.org that she was not willing to return home. “I can no longer do physical work, look at my state. I need to be compensated for that. For what I’ve been through. How is QR3600 (just short of US$1000) enough?”

She is also concerned that she may be deported before her surgery in November, or that she may not continue to receive the excellent health care treatment she has received so far, because of her irregular status.

“That’s not all… he should be punished for what he did to me.”

In her voice notes, some of which are shared in this report, JMM says she was frequently not given food or was given days-old food that had gone bad. JMM has a four-year-old back home and family she wishes to reunite with, but not before she has been treated and is in better health.

Details of her case have been shared with the Kenyan Embassy (for over a year), ILO Qatar (since 3 June 2022) and the Ministry of Labour (through the ILO).

While Qatar’s public healthcare system has continued to help and support JMM, other state mechanisms continue to fail her, from the case intake at the police station to subsequent attempts to seek justice in the various judicial mechanisms. 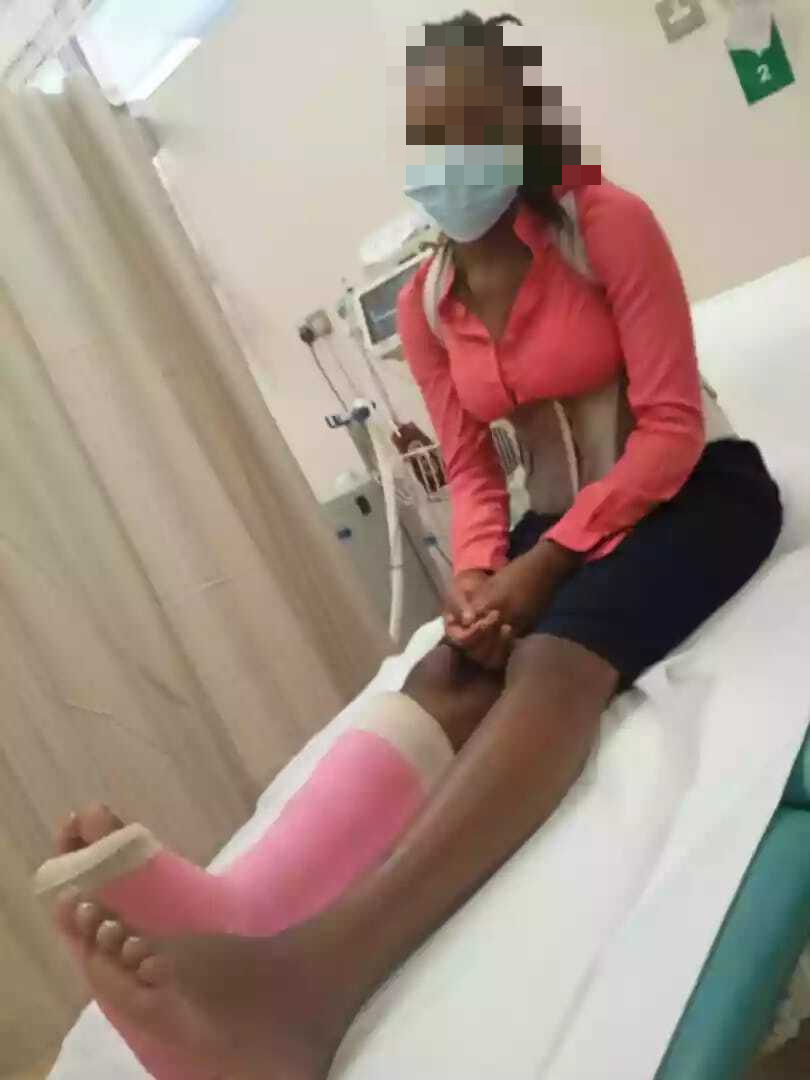 At the hospital during treatment 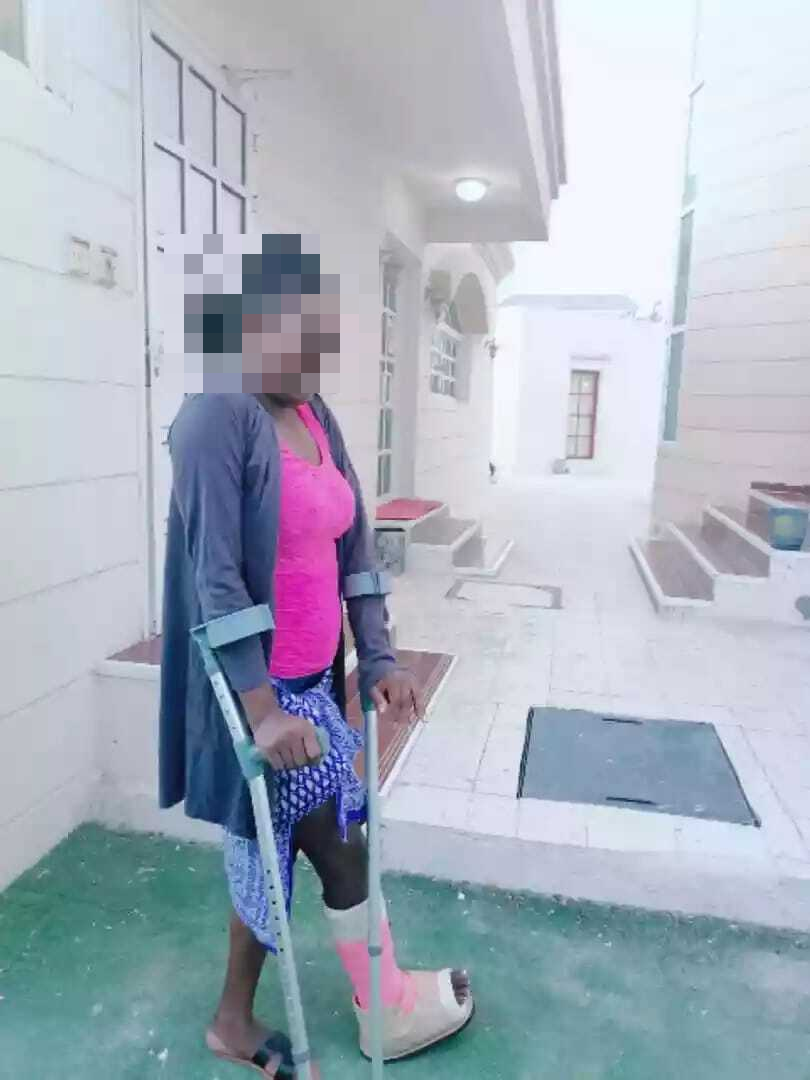 At the Kenyan Embassy 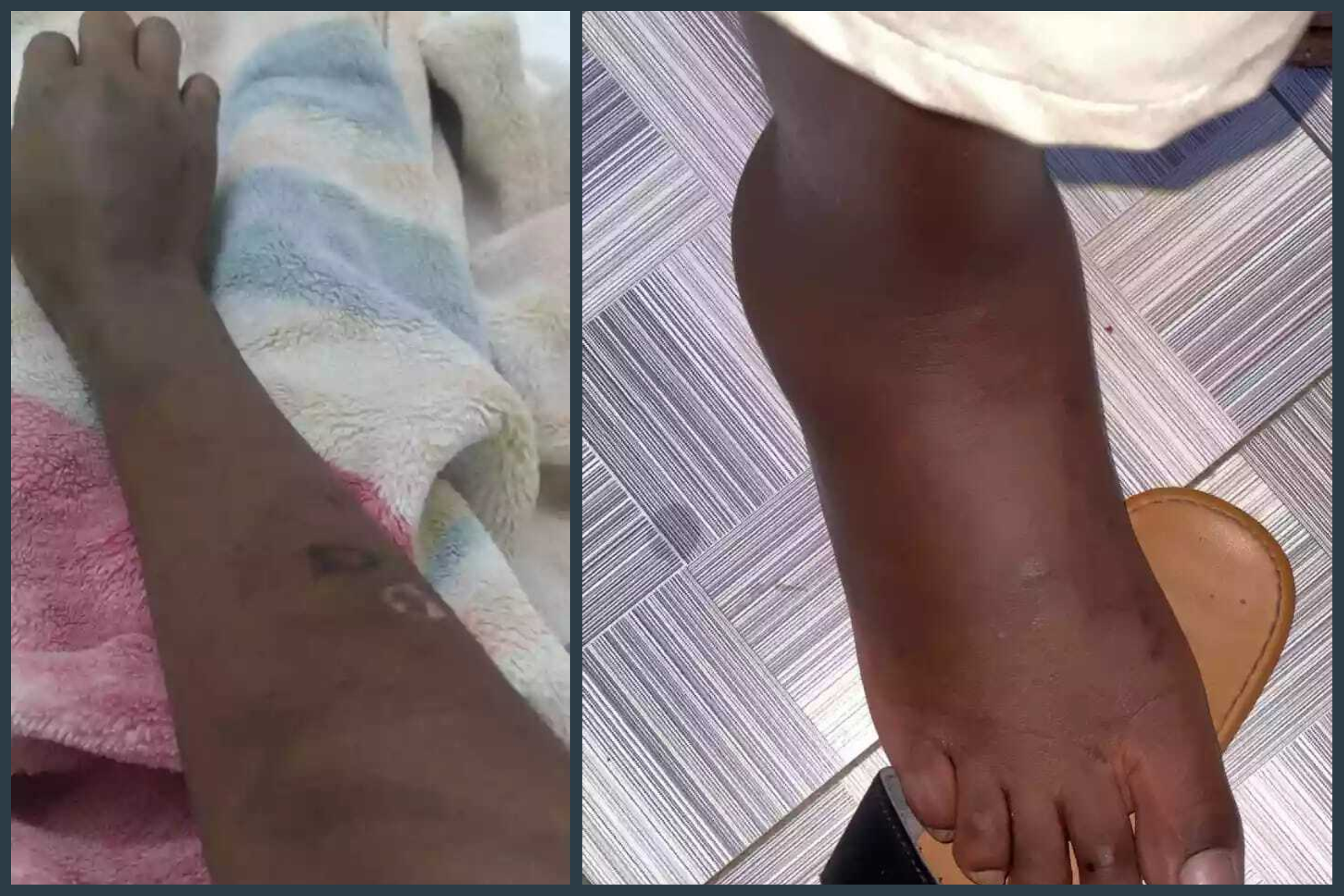 Burn scars and a fractured ankle before surgery

At the hospital during treatment

At the Kenyan Embassy

Burn scars and a fractured ankle before surgery

I JMM a Kenyan 27 years old. I started working at my sponsor’s house whose name is Mr FS. On 5th of May 2021 at Shahaniya Estate.

The first day I entered the house they took everything I had, which are my bags and my mobile phone. I started serving the first day I entered the house. The family had 8 members where I was the only worker in the house. The house was very big alone. My sponsor was a police officer. He used to beat me daily. Every time he comes home he comes to beat me. Wherever their babies mess up with anything in the house they would be me without even giving me time to explain what happened.

He used to punish me by locking [me] inside a room that has no AC whenever they go out. It reached a time where I couldn’t be able to walk my self due to they injured my keg and my back by beating me and slapping on my back. Other scars he would use  *** wires highheel shoe, a sweeping broom and a fire lighter. They used a fire lighter to burn me on my hands, chest and my neck. And the broom they used to on beating me mostly my head and other parts of my body until it breaks. And highheel shoes was used to beat me on my fingers and my toes until he hit it on my *** where it reached appoint (a point) that I couldn’t walk nor stand.

I continue suffering until one night they told me that their Philippine Khadama who was there before me was coming. The mother of the house wanted us to work two of us but the father refused and decided to transfer me to her female friend. That day at around nine at night he took without anything I had and threatened me that I should not speak anything I had been going through including no been given my 3 months salary.

When we met this madam she asked him some questions about me but he lied to her by telling her that according to the injuries that I had: he said that I slide on the floor when mopping and then before we reached to this madam on the way he beaten me and threatened me that if I try to say anything that I had been going through he will come for me and kill me since he had my documents.

In their friends house I stayed there for only one day and then she told me that J since my house is small I’ll take you to my friend’s house and then when shift to the bigger house I’ll come for you. I accepted and I was taken to the friend of their friend where I stayed for some days.

While (in) this house I reached a point that I couldn’t walk nor stand up straight by myself. This madam was very nice due to the way she treated me that’s when I saw that she can help me and decided to tell her everything I had been through. She sympathised with me and gave me her phone to make calls to my people.

The following morning I couldn’t wake up so she asked me if I have any number of agents and I told her yes so she called her. She called my Kenyan agents and told her my situation where she requested for the pictures of my documents where this agent sent a photo of my passport which she used it to take me to the Hamad general hospital.

Reaching hamad generał hospital I was put on the wheelchair because I couldn’t walk by my self. When the nurses saw me at the administration they refused because they told us to involve police because the way I was physically.

Immediately they called social workers and then I was told to write a statement. From there I was admitted and treated through x-rays from there. I was admitted for a day. The following day I was discharged by the people from the embassy of Kenya through the social workers.

I was taken to the Kenyan embassy where I stayed [for 8 months] while attending my appointments at Hamad general hospital and bone and joint centre clinic. I continued with the appointments until November 21st 2021 when I had an operation on my right leg and I was given a back supporter for my back since the doctor said I can’t go undergo an operation on my back at my age. Back operation seemed to be delicate.

After operation I stayed for 3 months and then I was transferred to Bin Omran for physiotherapy. From there I was discharged been referred again back to bone and joint centre clinic where attended my last appointment on 9th May 2022. On that day doctor said that I must undergo another operation for the removal of the metal that was put inside my leg at the ankle joint area.

On 27th/04/2022 I received a phone call from the embassy of Kenya saying that my sponsor Mr FS had visited there and took my salary [for] three months salary 3600QR and then I asked how am I going to be paid these other days that I have not been working.

When asked Mr *** the ambassador he told that I will be compensated by the assault case.

When I asked him about the assault case he gave me the number of the lawyer Mr OM (number redact) and gave me the case number [redact] for the appeal [redact]. When I was still at the embassy I was taken to the office of public prosecution where I met the madam who was the friend of my sponsor the one that I was given to. There I was even requested say the approximate amount I would like to be given and I said 150,000QR and then they told that amount was small according to the injuries I had and it was added up to 250,000WR.

From there I was taken to forensic hospital where every injury was measured and they confirmed every unjust I had.

On 20th May 2022 I spoke to my lawyer and he told me that he wanted to come here and see the documents I have. When he came he told me that case has no witness and also has no evidence where I told him that I myself am an evidence, according to the injuries I have and scars.

Before I handed over the case I requested the embassy to help me meet my lawyer but they didn’t because I wanted to know which evidence is he using to represent me on court because they told me the case ongoing, which it wasn’t.

I handed over this case to the lawyer on 09/12/2021 and it has a duration of one year which means by December this year the case must be over by the grace of God.

Since then my case has not been progressing. The lawyer never took it to be serious since he never gave me updates about the case. Due to this I decided to hand over to another lawyer. I proceeded and took the power of attorney where I was given another certificate for my new lawyer. I took it on 22/06/2022.