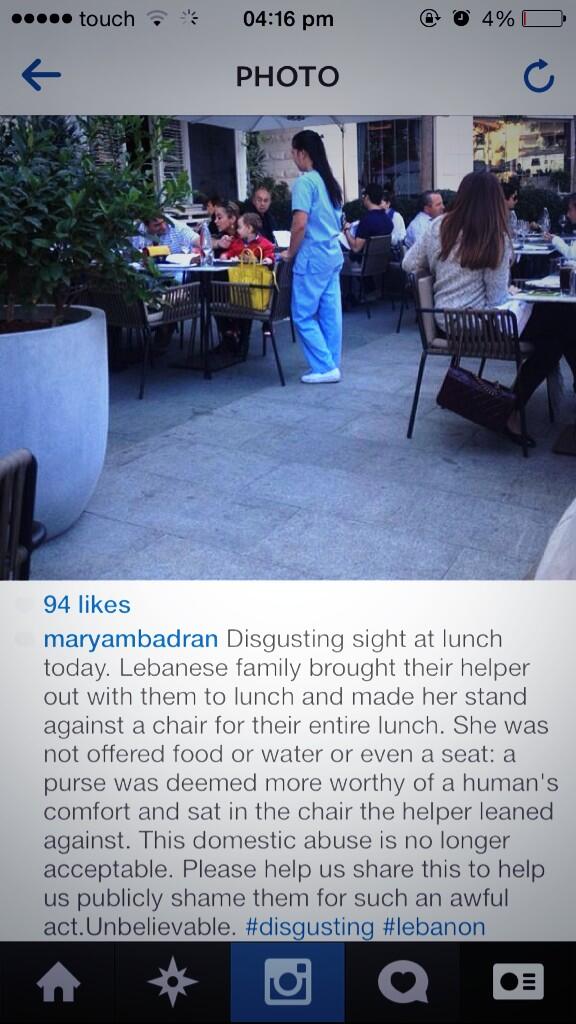 A Lebanese citizen, author of It's Deebatable, posits these questions after witnessing a domestic woker forced to stand up, without food, while her employer’s family dines at a restaurant.  This conception of domestic workers as round-the-clock servants contradicts Lebanese law, working contracts and international labor standards:

On Sunday, October 20th, 2013, I went to lunch. At the table behind me, a family with a young child brought in their housekeeper/children’s nanny. She was dressed in a uniform that looked like blue hospital scrubs. They walked in and she assumed position, where she stood behind a chair, as the family assembled into their seats. She stood there for the entire duration of their lunch. She did not sit. She did not eat. She did not grab a glass of water.

She accurately points that even in the unlikely scenario that the worker chose not to eat or sit down, such behavior demonstrates the extent to which workers have internalized their social marginalization.

Even if the housekeeper didn’t want to eat, or sit down, the family should have insisted. Instead, they kept her on her feet, in uniform, staring as they ate their expensive meal. (Not to mention that Sunday should have been her day off!)

The author reflects on her own internal battles as a witness to this public appearance of mistreatment and the struggle to determine an appropriate mean of intervention, of confronting these normalized abuses:

I contemplated getting up and saying something. I contemplated sending dessert over to her, and telling her that it can get better. But I didn’t want to hurt her or subject her to further embarrassment. So I snapped a picture, and uploaded it onto social media sites. I rallied my sister and my brother. The three of us sat there, building a war room on our table. We were enraged.

The author entitles her post “Shame On Me,” chastising both society and herself for failing to speak out against such abuses more often.  But through capturing and reflecting on this abuse, the author has sparked a critical social dialogue; her photograph and her written piece has received varied but wide responses from Lebanese citizens, and this acknowledgement of domestic worker issues - its elevation to local discourses -  is an essential precursor to any kind of systemic social and legal changes.

Lebanon’s Anti-Racism Movement is dedicated to exposing, documenting, and combatting racism and discrimination, a key driver in the mistreatment of domestic workers. In addition to on-the-ground initiatives, they similarly publicize abuses to invite and encourage dialogue. Read more about other Lebanese initiatives and organizations here.