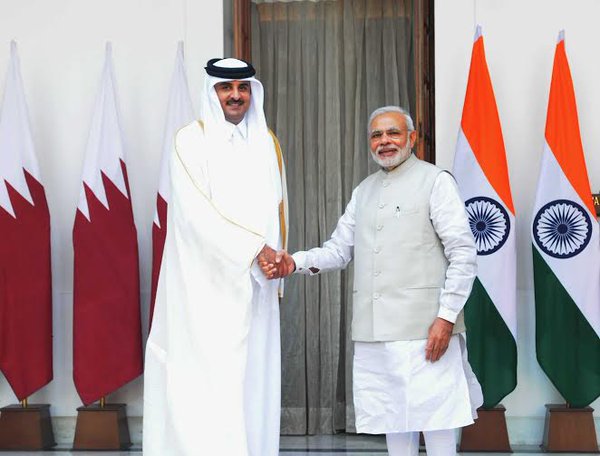 Indian Prime Minister Narendra Modi makes a state visit to Qatar on June 4 and 5. This is his third GCC state visit (UAE and Saudi Arabia) and the first to Qatar.

Emir of Qatar Sheikh Tamim bin Hamad Al Thani visited India in March 2015, which resulted in six MoUs, none of which address the well-being of the over 650,000 Indians living and working in Qatar.

Indians comprise the single largest group of migrants in Qatar, and lower income migrants are amongst the most marginalised in the community.

The six MoUs were for Cooperation in the field of Information and Communication Technology; between the ministry of earth sciences and Qatar Meteorological Department for Scientific and Technical cooperation; between the Diplomatic Institute of the Ministry of Foreign Affairs, Qatar and Foreign Service Institute of the Ministry of External Affairs; cooperation in the field of Radio and Television; and for Mutual Cooperation and Exchange of News.

Of the 650,000+ Indians in Qatar, a significant portion are second generation or long-term residents. Qatar continues to see them as transient or temporary workers, despite their economic and social contributions. Thought the Kafala has been ‘reformed’, or renamed as some see it, it doesn’t go far enough in protecting rights of migrants.

India has also remained either silent or supportive of Qatar’s tardiness.

Following a complaint raised by its delegates the ILO sent a high level team to Qatar, which gave the country until the end of the year to show progress. An ILO official (who chooses to remain anonymous) told Migrant-Rights.org that India is one of five countries that supported Qatar’s request for more time to implement reforms.

Prime Minister Modi must impress on Qatar the need to step-up reforms and protect Indian citizens.

2. Health and well-being of Indians

While Qatar and India have claimed the death rate of Indian migrants is ‘normal’, neither country should undermine the well-being of this large population group. Access to health for lower-income migrants is still limited, and there’s little cognizance of preventive healthcare.

Moreover, this year has seen an increase in suicides, drawing attention to both debt trap and mental health of migrant workers.

The Indian PM should insist on proper post-mortem and investigation of all deaths.

Despite the size of the population, the Indian Embassy has not received permission to operate a shelter. While some female migrants are accommodated in the embassy premises informally, many stranded Indian migrants are made homeless. The detention and deportation centre is treated as a shelter by the State.

The Philippines embassy is the only embassy allowed to run a formal shelter.

India is the largest remittances receiving country in the world. It receiving $72billion in 2015. Yet, it pays no attention to reintegration of returning migrants. Unlike those migrating to Europe and the Americas, migrants to the Gulf do not have right to citizenship or permanent residency and must return to their home country at the end of the contract.

Lack of integration and options for productive economic activity forces many unskilled workers to re-migrate. This is particularly true for women in domestic work.

The PM should engage with a cross-section of Indian citizens, and not just those cherry-picked by Qatar and the Indian embassy, as he did in UAE and Saudi. This will help him better understand the ground reality of the most vulnerable migrants and their aspirations on return.

Domestic workers are not covered under the labor law, and neither is there a standard contract that provides a degree of protection. Though India formally does not send domestic workers to Qatar, many still find their way here through irregular means. Qatar has done little to clamp down on the illegal visa trade, making the women even more vulnerable.

India has launched the e-migrate system to streamline recruitment and make migration safer. However, contract substitution is still rife and middlemen continue to play an exploitative role. Qatar must work closely with India to ensure all recruitment and employment of unskilled and semi-skilled workers is done through the e-migrate system. The countries must also explore more fool-proof methods of electronic contract submission, to make sure workers receive what they are promised as wages.

The e-migrate system also has sector- and country-specific minimum wage requirement that must be implemented.

Special mention must be made on Indian nurses. Indian nurses are in demand globally, and make up a large percentage of the overall nursing staff here. There is no set minimum wages for Indian nurses. Migrant-Rights.org spoke to nurses and the state-run Hamad Medical Corporation who said wages were also discriminatory and nationality of the nurse dictated the salary they received. The Indian PM should speak to the nurses and insist Qatar paid them based on qualifications and experience.

Qatar does not have a legal aid facility. The Indian embassy works with a couple of lawyers in Qatar who provide services either pro-bono or at a subsidised fee. There is a pressing need for a well-resourced legal aid in Qatar, and one in particular within the embassy, to cater to the single largest migrant group in Qatar.

Editor's Note: The number was earlier misstated as 7 instead of 8. The latest edit corrects that.