Op-Ed: When Social Media Fuels the Exploitation of Workers

Over the last few years, we have witnessed a shocking rise in videos of employers abusing migrant workers. From the viral incident in Kuwait in which an employer filmed a domestic worker hanging on to, and then falling from, her second-story balcony, to the incident of a Bahraini physically assaulting a worker, to the most recent video trending in the Gulf under the hashtag #شاب_يصفع_عامل (“man slaps worker” – below), our social media feeds are inundated with these cruelties. Aside from making these videos go viral – and not always with the best intentions – what do any of us actually do in response? 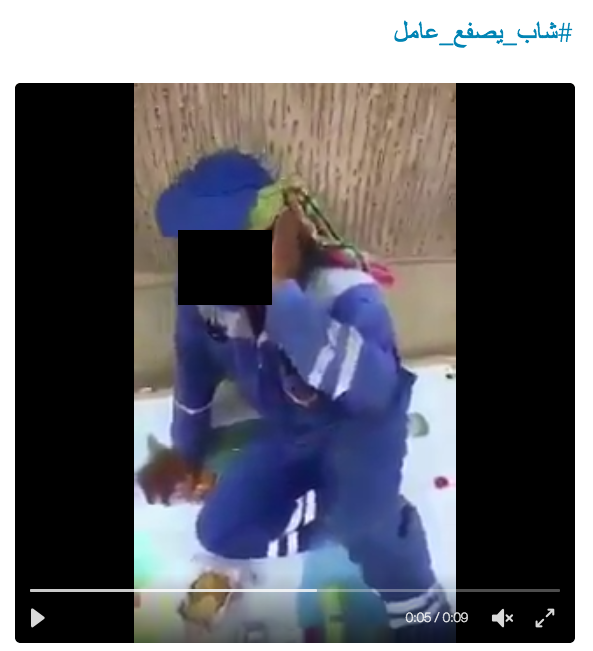 In many cases, these videos are filmed by the abusers themselves, who callously and cavalierly upload them confident in their impunity, and without regard for the seriousness of their actions. Often, the videos are shared in a mocking manner that further humiliate and dehumanise the victim, even in the grave instances of workers’ suicide attempts. These videos do briefly spark criticism and outrage on social media, before they are quickly replaced by the next trending topic, leaving no meaningful change in how we treat workers in our societies.

Migrant workers in the Gulf are among the most vulnerable members of our communities. They often can’t seek legal compensation or assistance due to the threats by their sponsors or in the case of documented workers, the risk of losing their visas. They fear deportation and the life-threatening abuse they’d likely endure as a result.

Beyond systemic challenges and the physical harm depicted in these videos, these workers are subject to further degradation and humiliation when these videos are shared, especially those which are sexual in nature. When it comes to sharing videos of Gulf nationals, citizens, and wealthy or prominent residents, we have a nationwide discussion of privacy laws and ethics. In the UAE, a migrant was jailed for filming a national abusing another migrant.

Sadly, few of us consider a worker’s right to consent when we share videos without protecting their identities.

We sometimes write about these incidents and tweet about them. Occasionally, there is a flash of international media coverage. What is the next step? When will we seriously intervene against the systematic mistreatment of workers, and challenge existing dialogues on their exploitation for both labour and our own sick comedy? It’s not enough to wait for more such videos to materialise and build an archive to support this argument. The archive is already large enough, and our inaction passively contributes to their continued abuse.

Sharing these videos can raise awareness, which can at times lead to the identification of abusers, and in the gravest instances of abuse, may lead to a criminal investigation. However, we must remember that sharing, especially sharing without an attempt to seek justice, furthers the exploitation of workers and fosters a climate where their abuse is normalised. When we become desensitised to violence against workers, it enables us to accept and even expect the unacceptable.

After years of these incidents, of one viral video after the other, not much has changed for migrant workers in the Gulf.  They remain our countries’ most vulnerable populations. And we have consented to this status quo.