Chathaba: The Accusation Against Every Domestic Worker 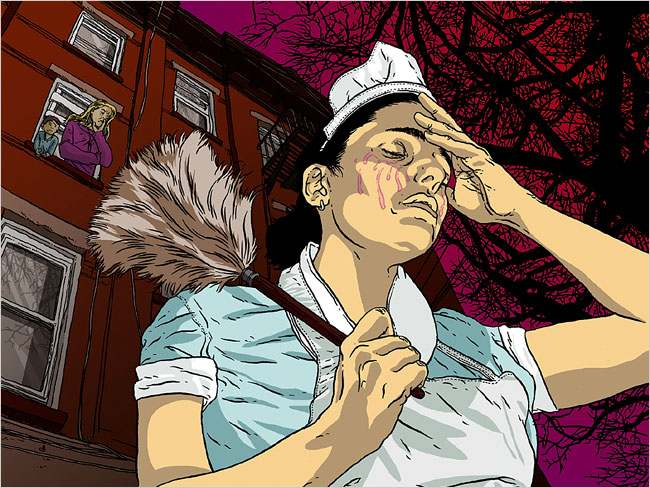 “I kept yelling and yelling, but he closed the door, and no one could hear me. It’s been 23 years but I’ll never forget that memory in my heart,” Amy* says.

At age 19, Amy, like many other domestic workers, left her village in the Philippines to come to Kuwait in order to financially support her family. “I was too young, I didn’t understand how dangerous it was to be living with strangers, even if they were my employers,” she says.

“Everything was different. In 1993, Kuwait was still affected by the war that happened. I didn’t know where to go, or who to go to. Today, the police station is five minutes away. Back then, it would have taken me 30 minutes or more to reach them,” she recalls.

Again, like many domestic workers, Amy’s story involves sexual assault; an attack that she managed to escape but which still affects her by every day.

She had forged her age in order to obtain a work permit and soon found employment with a  Kuwaiti family. “The father wasn’t alive. It was only the mother, three brothers, and two sisters. The sisters were kind to me. One of the brothers was disabled, and the 17-year-old, Ali,* was the drug addict,” Amy recounts.

She earned 50 K.D. per month, which amounted to 6,000 pesos. “I left Kuwait with no savings to take back with me, I sent my parents 40 K.D. a month. It was not that much, but it helped us with our basic needs. It was worth much more in the Philippines,” she explained.

She describes the grand house, the times she enjoyed with the other two domestic workers from Sri Lanka, and the kindness of the sisters. “Everything was normal, up until that day where it all made sense. The weird way he looked at me, how he always stared at my hair; I never understood up until that moment when he attacked me.”

A usual day involved preparing lunch, cleaning the house, taking care of the younger disabled brother, and then relaxing in the ladies' Diwaniya. She explains how she didn’t think much of Ali’s  weird stares. “He would look at me, and his eyes would twitch. I didn’t think much of it, their family married their first cousins, so I thought he was partially disabled too, or it was because of the drugs he was obviously taking.”

The ladies' Diwaniya was outside of the house for privacy. There was another area for the men and a storage area in the backyard. Ali came to the ladies’ Diwaniya for the first time, called Amy, and asked her to bring him his tapes from the storage area. “The storage place was isolated and the tapes were on the first floor, I think it was around 15 steps to reach that floor,” she says. “A few moments later, he walked in.”

“Ali, which tapes do you want?” she asked. He said nothing. He stared at her, his eyes twitching and red, closed the door behind him, and just stood there in silence. "I did not know what to do, I knew that he didn’t want the tapes, he wanted me,” she chokes, tears welling up in her eyes. With the table the only barrier between them, he started to approach her. “He started chasing me around the table, it was like a scene from the movies! I started to think that if the door was locked, I should jump from the window, I was going to do it, but thank God, he did not lock the door.”

"I did not know what to do, I knew that he didn’t want the tapes, he wanted me.”

She ran outside the room but as soon as she reached the stairs he grabbed her right shoulder, ripping her shirt and leaving her with scratches from her neck down till the top of her right arm. “I don’t know how I managed to get him off, how did I not fall off the stairs. I started running calling his sister’s name like a crazy person.”

Ali was far behind, Amy was already knocking on his sister’s door, and as soon as she came out, she was baffled to see Amy crying. “chathaba [liar in Kuwaiti dialect], chathaba!” Amy imitates the way Ali spoke. “I’ll never forget his voice, the way he yelled chathaba! His sister believed me and told Ali to leave. She then begged me not to tell the police. The house was in Farwaniya. Everything was far away. How was I even going to escape?”

This incident happened in 1995, two years after Amy’s contract ended. After, the incident, she had to stay for a week until the family was able to book her flight back to the Philippines. “I could not sleep, I kept a knife in my pocket and under my pillow. I kept feeling like he was watching me at night. It was the hardest week,” she says. “I told the domestic workers that were with me to take care and to leave as soon as they can. I still wonder what happened to them.”

“I’ll never forget his voice, the way he yelled chathaba!

Until this day, Amy is haunted by that memory. She never told her family, not wanting them to worry. The mother and sisters begged her not to tell the police, fearing Ali would go to jail. But she didn’t care about reporting Ali, all she wanted was a ticket back home.

If you find yourself facing abuse, whether physical or emotional, you can contact Kuwait Human Rights Society at 22215150 where they offer free legal advice. Before making any decision, it is advised that you know what your rights are in order to make your next safe and legal move. If you are leaving your employers, you must file a complaint at the nearest police station to avoid charges of ‘absconding’ being pressed against you. If your situation is dangerous and you are in need of an immediate escape, there are shelters that accommodate domestic workers leaving abusive employers like the Shelter Center for Migrant Labor located in Jleeb Al-Shuyoukh (location on google maps: https://g.co/kgs/9U3sXy)

She promised herself not to go back to Kuwait, but the need to support her two daughters and her precarious financial status pushed her out of her home once again in 2006.  She was terrified. “It’s like I have a phobia,” Amy says. “But right now, things in Kuwait are very different, back then it was dangerous.”

Today, back in Kuwait,  Amy is comfortable with her employers.  It took her years to find the strength to move on, but she managed with the motive of wanting to support her family. “I understood that I should never trust people I don’t know, till this day I have nightmares about that incident, but I need to move on.”

In 2013 alone, 56% of all suicides in Kuwait were committed by domestic workers.   Last month, the Philippines suspended all workers going to Kuwait to investigate the deaths of at least six domestic workers. The suspension was in part motivated by the discovery of a Filipina of a domestic worker’s body found dead in a refrigerator in an inhabited apartment. The employers who committed the crime left Kuwait and had kept the door locked ever since.

“What can we do? If people look at us like maids and not human beings, we will always be treated like this,” says Amy, after hearing the story.