Kuwait Extends Amnesty for Illegal Residents: Way Out or Impasse?

Kuwait continues to use the amnesty to push irregular workers out of the country, circumventing just resolutions to the problems these migrants face. The majority of workers enter the country legally but are often forced into irregularity due to unfair employment practices.

On January 29, Kuwait’s  Ministry of Interior (MOI) issued a decree declaring an amnesty for workers with expired residencies, allowing them to return home without penalties. This decision is expected to help around 130,000 expatriates in violation of residency laws— 7,000 of which are Al Kharafi National employees.

Last week, the MOI extended the amnesty deadline from February 22 to April 22, as a gesture purportedly helpful to workers. But in order to avail of the amnesty, the workers are forced to leave without receiving their dues.

Most of the workers Migrant-Rights.org spoke to replied in a tone of defeat rather than relief. “I’ve worked in Al Kharafi National for over 11 years. Suddenly, they cut my salary for almost 11 months. I still haven’t received my settlement of KD2,500 (USD8300), it might be little for some, but for me, it is the only support for my family,” said Khan, a former Kharafi employee. 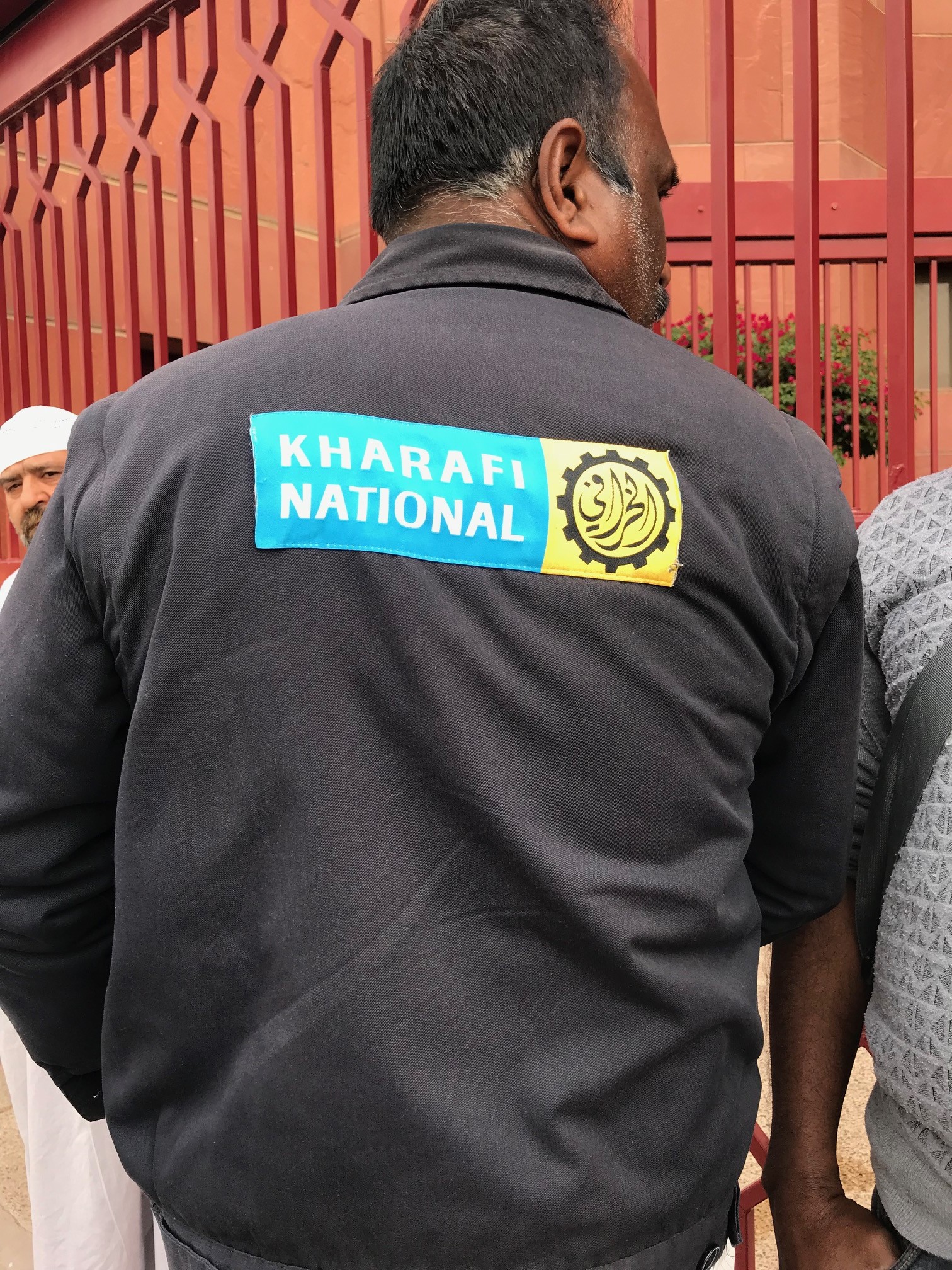 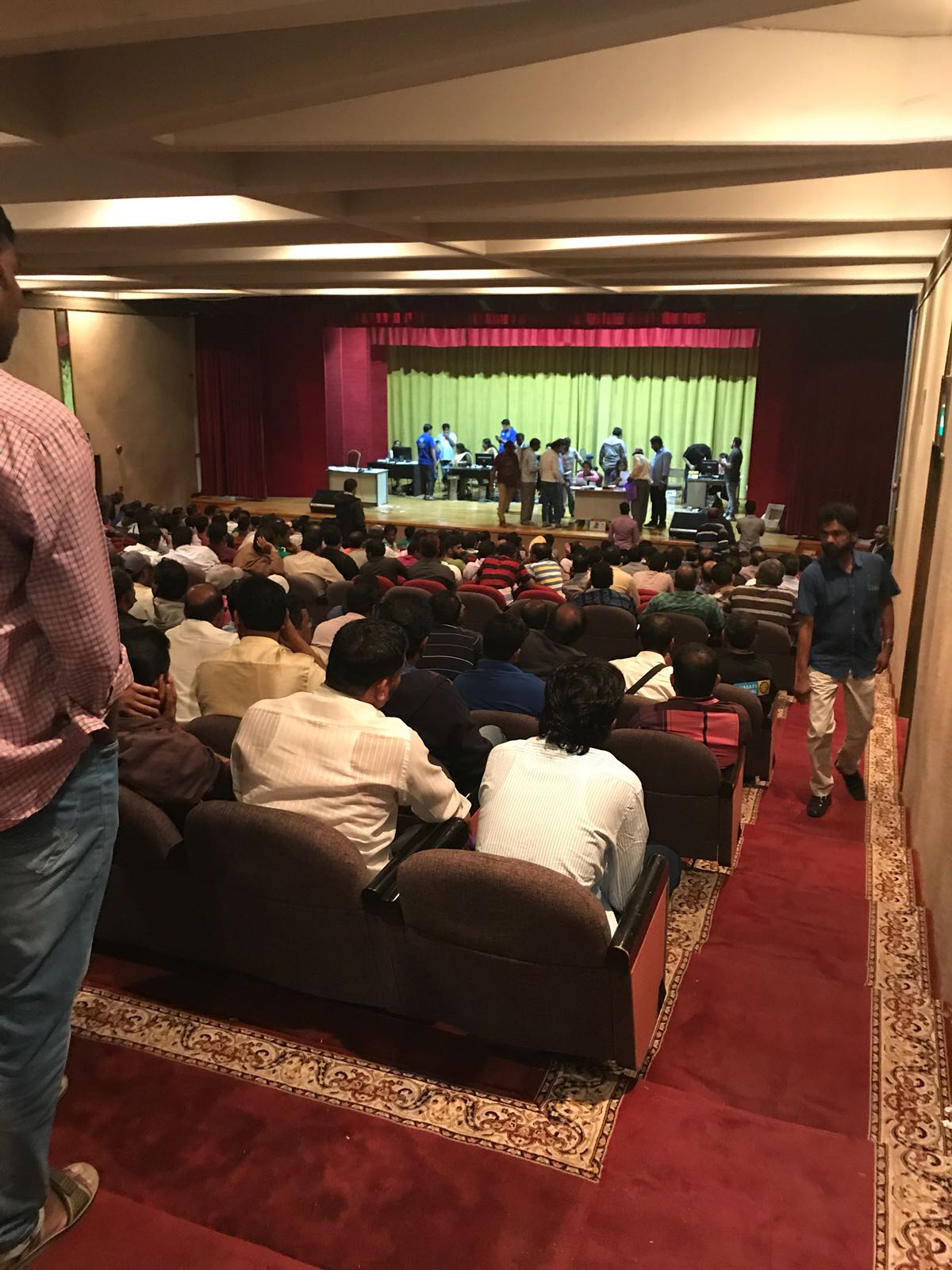 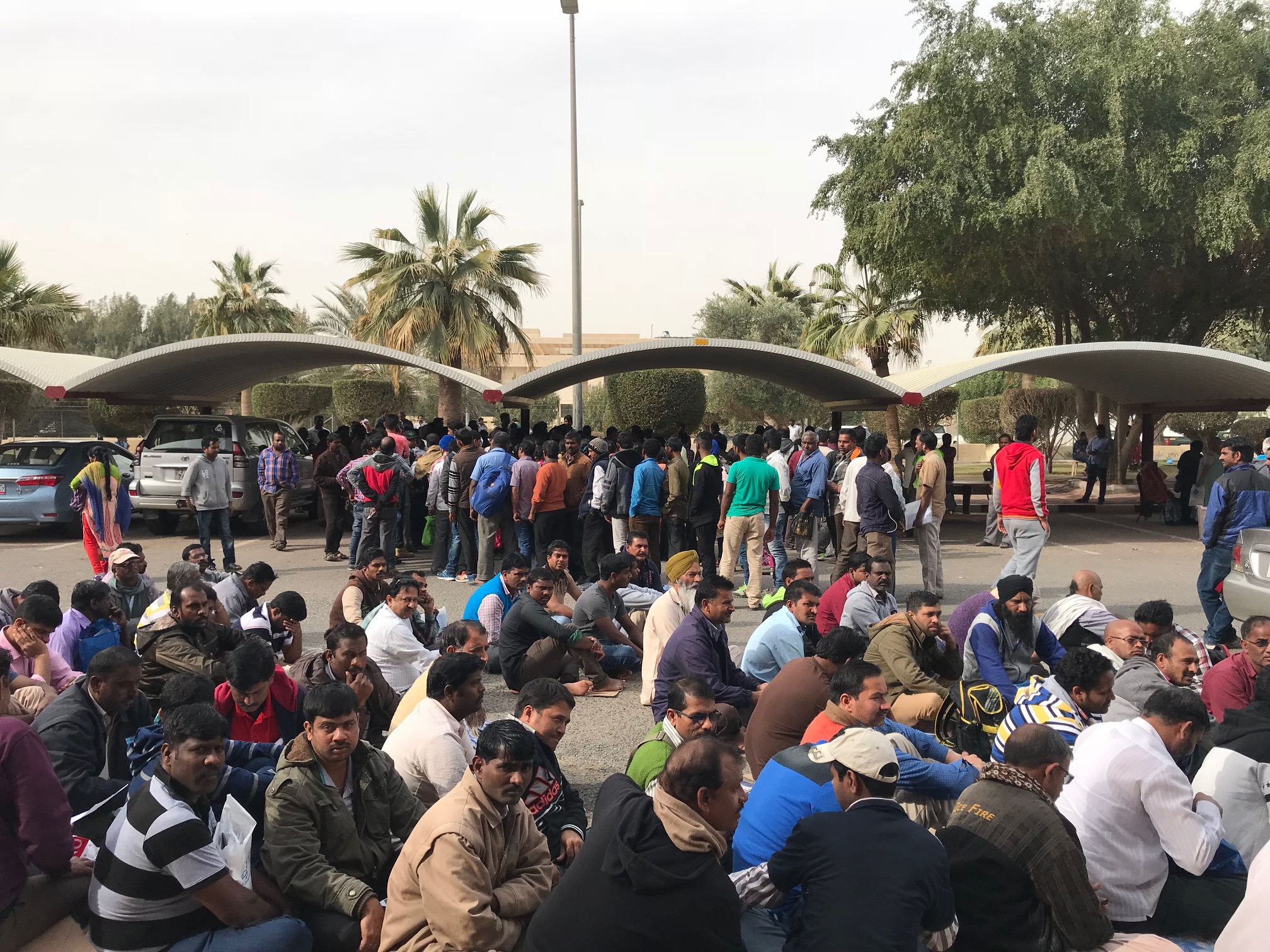 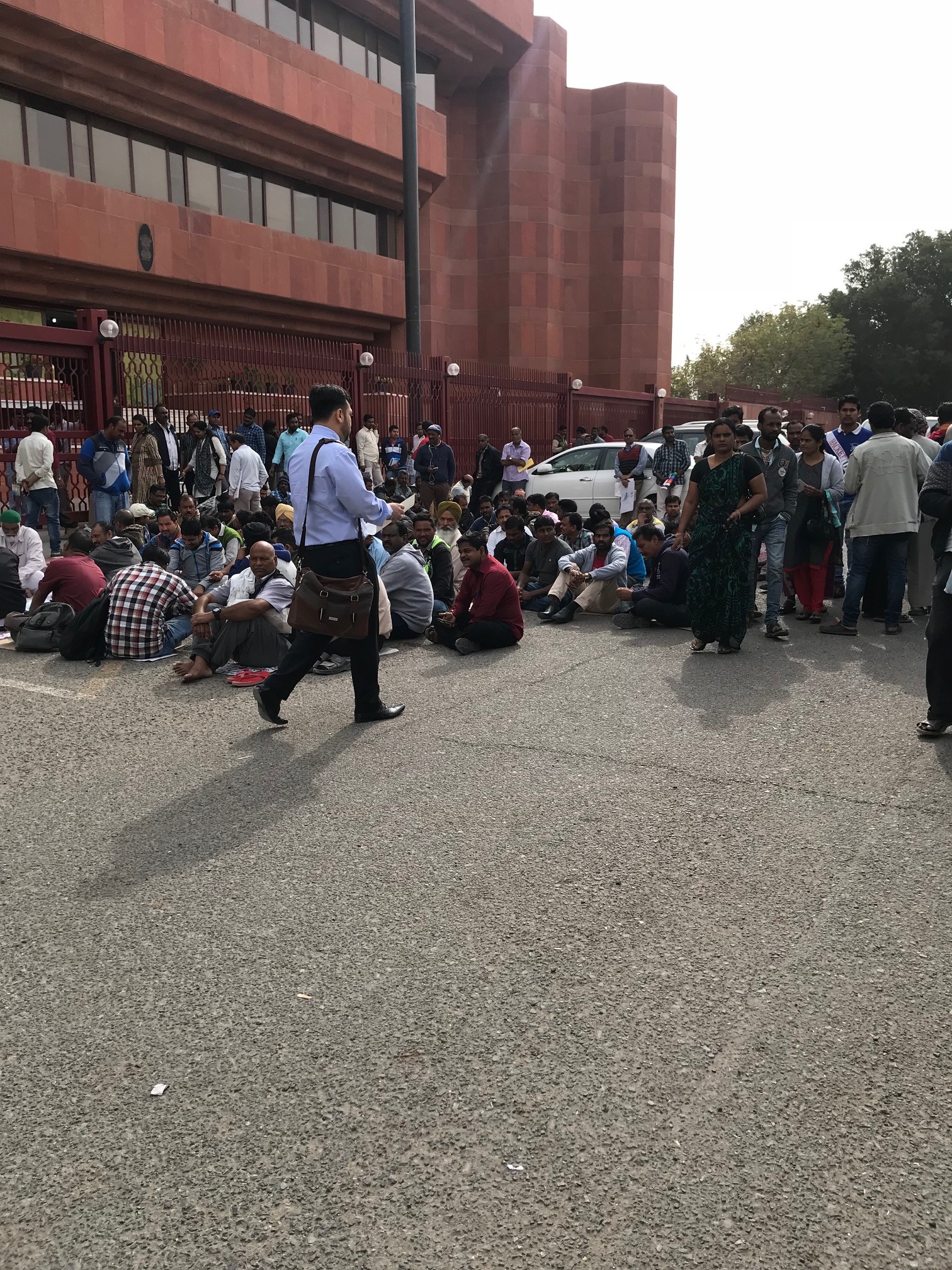 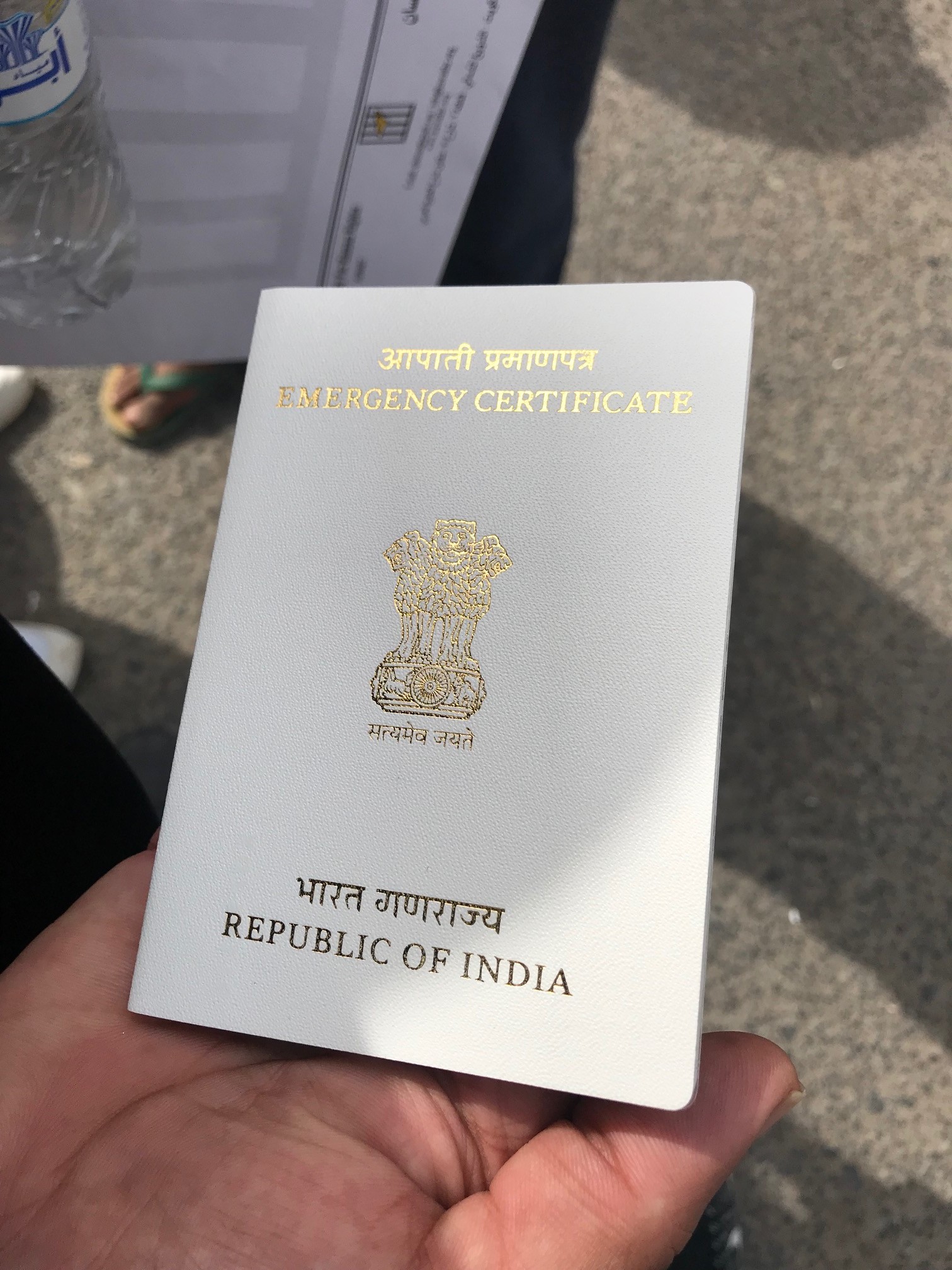 Embassies have been working to support workers financially, to fund their tickets home, as well as to provide food donations and shelter. According to the workers we spoke to and corroborated by other outlets, around 5,000 workers availed of the amnesty within its first five days.

The number of workers attempting to go home, and in need of support, keeps rising. An official from the Indian embassy remarked,

“We’ve been working on weekends till 5 p.m., there are so many workers in need. We can’t believe no action has been done for over a year.”

Local organisations, including the Kuwait Human Rights Society, Kerala Artlovers Association and independent volunteers, are providing workers with food supplies and other support.

A group of over 150 workers expressed distress and worry of what is yet to come, continuously repeating the same phrase: Why are we not being heard?

“All we want is for the world to know that we are here. Across the street from the Arabian Gulf, we are sitting here on the floor waiting for our emergency passports or our plane ticket. We are refugees. All we want is to be heard.” plead Kutty, another Kharafi employee.

A community worker at the Philippines Embassy believes more pressure should be put on the Kuwaiti government to ensure workers’ rights. “People are losing their homes. They are incapable of paying back their debts; their families in the Philippines are being kicked out of their homes. How are they going to pay back the bank?” He stressed that the Kuwaiti government is handling the situation inadequately. “Strong action needs to be taken, or else we will never be viewed as human beings. We do not want to be treated like animals; we work hard and help this country as much as anyone. Where are our rights?”

The majority of the workers left their countries for salaries ranging from KD70 to 150 (USD230-500). If they go back without their settlements, they might lose their homes, their children’s education, and might not find another job. “The amnesty works better for the companies in Kuwait rather than the workers. But what can we do? We have to accept what’s happening,” another worker lamented.

The funds available to amnesty-seeking workers differs with each embassy. The Indian Embassy was able to offer workers USD40, emergency passports or immediate tickets back home. But in order to avail of the amnesty, the workers are forced to leave without receiving their dues.

The Philippines Embassy has also provided support to amnesty seekers, but also took a strong stance against the government’s inaction,  suspending the deployment of Filipino workers to Kuwait.

From bank debts to lack of medical care and food, workers have been hanging by the thread for the past year. The Indian Embassy was able to set up a medical camp in Al Kharafi base, but some workers are in need of critical medical treatment.

An official at the Indian embassy recounted, “Some of them had heart attacks, are depressed, some even died. I have one man waiting for his emergency passport upstairs. He is now semi-paralysed. He couldn’t take the pressure; everything he worked for has been taken away. Do you blame them? How is the government ignoring these poor people?”