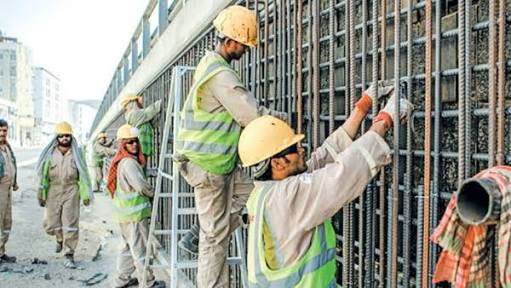 Around 17,000 migrant workers in Oman are in jeopardy of losing their jobs as the government crackdown on companies violating nationalisation rules. Companies with 50 or more employees must meet a 10% minimum Omani quota.

Last week Oman’s Ministry of Manpower announced that it has suspended transactions with 199 companies in the private sector for non-compliance, barring them from issuing or renewing work permits.  This means a suspended company cannot conduct any new business and that workers who require visa renewal will be forced into irregularity.

Oman has one of the highest unemployment rates and levels of poverty in the GCC the region.

According to a 2017 World Bank-ILO estimate, around 17% of Oman’s labour force is unemployed, compared to less than 6% in other GCC countries.

Given this state of affairs, nationalisation is seen as a critical strategy for increasing the employment of Omani citizens.

A worker in a packing company in Salalah, in south Oman, said that he didn’t know how long he would be able to continue in the company.

“I came just two years ago. I was working in Dubai. As this job gave a good offer, I came here. But now we all are scared. We have started to look for a job again in Dubai."

A senior official at the Ministry of Manpower said that the move is to encourage companies to adopt nationalisation and provide jobs for national workforce.

“News that migrant workers will lose their jobs is not true. However, if companies don’t follow the nationalisation norms set by the government, then we will be forced to act, which may result in job loss for migrant workers,” Sulaiman Khalili, assistant director of the Information Department at the Ministry of Manpower, told Migrant-Rights.Org

However, the government has not directly addressed the situation of workers who would become undocumented because their companies are unable to renew their permits.

As many as 78 establishments employing 2,360 workers were raided in Dhofar alone.

Some 27 companies employing 797 workers were affected in Sharqiyah North.

As many as 25 establishments employing 886 workers were raided in Al Sharqiyah south.

18 establishments were raided in Batinah North, and 12 in Batinah south.

The ministry cracked down on a single company in the Dhairah province.

The ministry has, in the past, repeatedly warned companies to comply with the Omanisation policy.

A trade unionist in Oman said that the nationalisation process should be implemented but in a balanced way.

“I personally feel that it should not result in job loss of existing migrant workers. The plans should be studied well and implemented with proper caution,” the trade unionist, who requested anonymity, said.

Another trade unionist said that nationalisation plans in all countries of the region should not conflict with labour and employment policies.

“The terms and conditions of contracts must be adhered to and all aspects of contracts should be respected. Migrant workers should not be forced to quit their job but at the same time, we are not against nationalisation. But we must implement it carefully."

The temporary regulation suspends the issuance of work licenses for migrants in sectors including information systems, sales, marketing, administration, human resources, insurance, media, airports, engineering and technical professions. Licenses issued prior to the new decree will remain valid until the expiration of their respective terms.

The move is the latest in the ongoing push to create more job opportunities for Omanis, as the small, oil-dependent nation looks to curb unemployment.

In 2017 October, Oman’s Council of Ministers announced it planned to provide jobs for 25,000 Omanis in both the public and private sectors, starting from December 2017.

In a statement regarding the decision, the Council of Ministers said they were urging the private sector to accord “Omanisation” maximum priority.

“There are actions to be taken against the establishments that do not cooperate with the efforts of the government to support employment and Omanisation policies,” read the statement.