New: Mapping of Rights & Resources for Domestic Workers in the GCC

Despite the recent implementation of domestic worker laws across the GCC, there remain few avenues for the region’s 4 million domestic workers to claim their rights. Support systems are scarce, and those that are available are not well-resourced. Our latest printable tool maps the official recourse mechanisms and select community resources for domestic workers in each of the Gulf countries — while acknowledging that rights on paper do not always translate to rights on the ground. 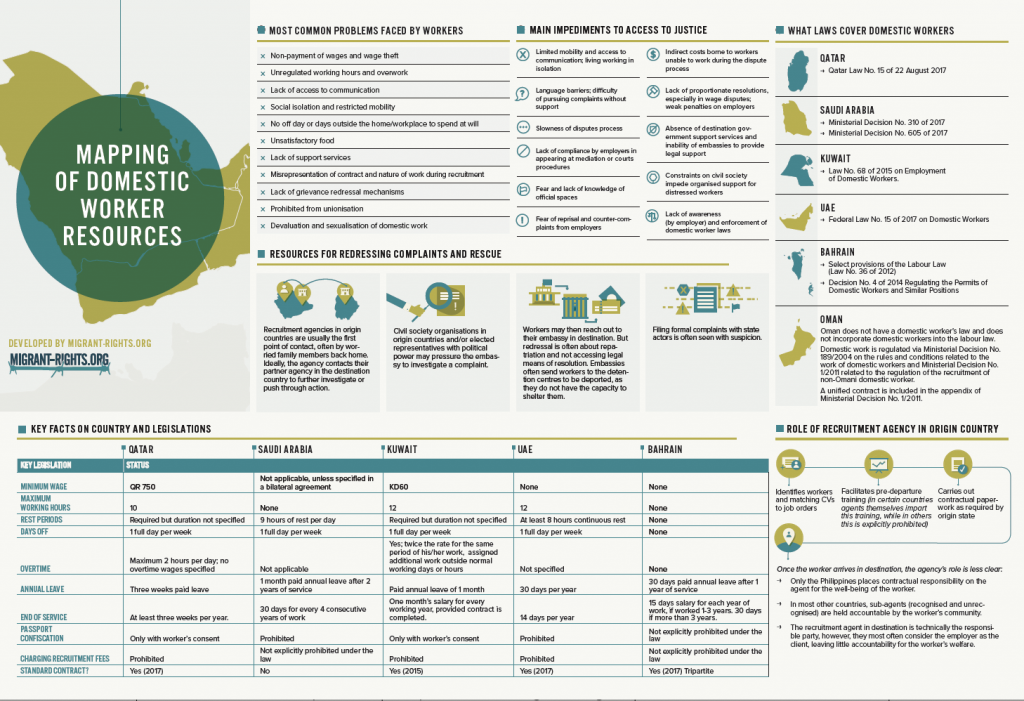 Official complaints procedures are often unclear, and not adequately tailored to the needs of workers who have little access to communication and even littler mobility. The problem is further compounded by constraints placed on civil society, lack of legal aid, and fear of being penalised for helping ‘runaway’ workers. Government resources are weak and difficult to access; the document maps out common barriers to the institutions that should provide aid to workers including physical access, language barriers, demonstrate how protections on paper rarely translate to protections in real life.

Domestic workers must also find a way to lodge complaints on their own behalf as third parties are often not allowed to raise violations. This places a heavy burden on workers to extract themselves from exploitative situations and present their complaint to authorities while avoiding charges of “absconding,” or leaving their workplace without permission Though complaint procedures often prevent employers from reporting workers as absconding once the complaint is filed, there is nothing preventing employers from filing such reports at the hint of any dispute. Once a worker is reported as absconding, they are often subject to immediate deportation without an investigation, except in cases of extreme and apparent physical abuse. Employers also increasingly lodge theft cases instead of absconding cases to avoid suspicion of a false counterclaim, which further complicates the redressal process.

The fate of a worker who files a complaint is unclear; in the UAE, Qatar, and Oman, there are no shelters specific to domestic workers. Each country runs shelters for trafficking victims and victims of domestic violence, but these issues are narrowly defined and exclude forced or exploitative labour practices. These facilities tend to accept domestic workers only in exceptional circumstances.

Government shelters specific to domestic workers or migrant women exist in Saudi Arabia, Kuwait, and Bahrain. Shelters should provide a safe space for workers escaping abuse and be equipped with specialised staff and services. However, with the exception of Kuwait, shelters are not open to civil society organisations and the quality of their services is difficult to evaluate.

Across the region, some embassies of origin country also run shelters for their nationals. These shelters are often on their own premises and vary in the quality of assistance they are capable of providing. Most are located in capital cities, inside or near embassy compounds, and are therefore difficult for workers living in other areas to access.

The most powerful resource for workers is often their own communities. Social clubs, religious groups, and individuals provide assistance in the form of transportation, translation, and advice among other things. The networks and individuals that do provide support to workers often do so covertly; they provide critical assistance to workers but cannot be too vocal about their work. Where possible, we have noted contact information for some of the region’s many established social clubs and organisations, but recognise that much assistance results from informal support and spurious encounters. Some groups requested that we do not share their contact information publicly in fear of being mistaken to support absconding workers.

As Gulf states reform recruitment and pass domestic worker laws, it is imperative that access to resolution and justice be taken into account; Gulf states need to clearly outline the process for reporting employment issues, such as non-payment of wages, overwork, and poor living conditions. A non-exhaustive list of recommendations includes:

For a printer-friendly version of the map, please contact us at [email protected]