This white paper examines the living and working conditions of migrant fishermen in the GCC, and the regulatory framework that governs the sector. 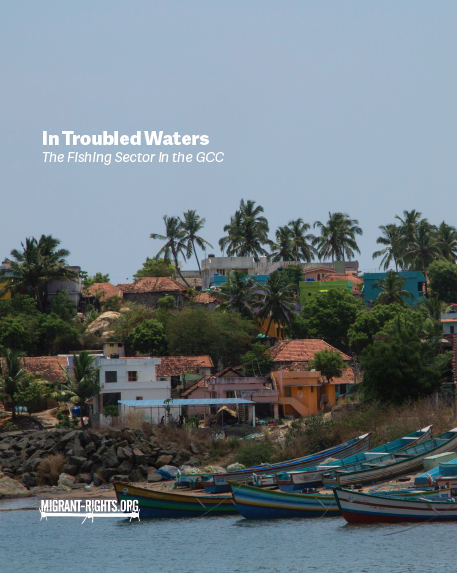 The seafaring tradition of the Gulf is changing in more ways than one; once the livelihood and pride of local tribes, the majority of fishermen today are migrant workers struggling amid the absence of labour protections, xenophobia, and the impact of climate change.

Fish from local waters now accounts for a modest percentage of consumption in the region, which relies on imports and aquaculture (fish farming) to meet demand.

Still, the Gulf’s migrant fishermen endure abuses similar to those well-documented in the global fishing industry: they are often not recruited through regular channels, are not protected by the labour law, and are at the mercy of their sponsor and skipper. Their salary is not guaranteed but rather determined as a share of their unpredictable catch.

The size of their catch depends increasingly on factors they have little control over, including increasingly strict regulations to prevent over-fishing that restrict the number of days fishermen can be out to sea.  In attempts to make-up this loss, they are encouraged to push their luck and cross maritime borders, making themselves vulnerable to detention in countries they cross over to. Migrant fishermen can be detained for months – even years – until their sponsors pay for their release. They are then required to pay the sponsor back and are forced to continue working until the debt is settled.

“There were five boats, mine was owned by a Sharjah sponsor. We worked in Ajman. Other four had an Ajman kafeel. We used to go near Iran border often, because the Arabi gets angry by our low catch, and would push us. We were all anchored in an island off UAE coast due to high winds. During that time the captain of one of the other boats told us that his kafeel had paid the coast guards. So we all went into Iranian waters. That’s where the trade is really good. Good harvest of fish.

“Our captain contacted us on the wireless and told us they were caught. He asked us to cut the nets and run away. The coast guard managed to catch up. They caught 49 of us then. We were on 8 boats. Three escaped.”

Unlike the construction and hospitality sector, the fishing sector is a relatively small component of the labour market, and therefore often overlooked. Investments in aquaculture and additional fishing regulations may continue to diminish the size of the migrant fishermen labour force.

However, thousands of migrant fishermen currently remain unprotected by any law and are subject to conditions of forced labour.

The following report is a working paper which aims to establish a starting point of discussion and promote further research. It will be updated periodically as new data and studies become available.

Download: In Troubled Waters: The Fishing Sector in the GCC