Amid the coronavirus outbreak, the financial exclusion of migrant workers and their families has been thrown into sharp relief.

Migrant workers are struggling to send their remittances home because banks and money transfer services have shut, due to lockdowns both in the Gulf states and their home countries.  This means workers’ families are struggling to make ends meet, unable to pay schools fees, rent, and medical care.

“The situation is terrible most [of all] for women migrant workers, as most of them migrated leaving their old parents and small children at their native homes or rental houses in metro areas who are fully dependent on their remittance money,” the Bangladesh Journalists’ Foundation for Consumers and Investors (BJFCI) said in a statement shared with Migrant-Rights.org.

“We are scared about our family members who are unable to maintain livelihood without remittance money,” Mezbaudding Mollah, a migrant living in Saudi Arabia told BJFCI.

Even informal channels like the hundi system (where money is given in local currency to an agent in the destination country, and the agent’s counterpart provides an approximate equivalent to families back home) and mobile money transfers are not functioning reliably amid the coronavirus outbreak. “If we don’t send money, my children and parents will starve,” Nazrul Islam, another migrant worker, told the group.

Some 12 million Bangladeshis work overseas, according to BJFCI. Remittances are the “lifeblood” of the Bangladeshi economy and has had a “multidimensional” impact on reducing poverty.

Financial inclusion: progress, but still some way to go

Global remittances hit US$689 billion 2018, of which some US$528 billion was sent to developing countries, according to the World Bank.

But despite the cumulatively large amounts of money that migrant workers remit, the financial and payments system often comes up short. Although some new fintech (financial technology) options are emerging, many migrant workers are stuck with expensive and inconvenient options for sending money home.

For migrant workers in the Gulf, high transfer fees already eat into the funds that they remit, as reported previously by MR.

Expensive remittance services are a global problem. The World Bank estimates that if the cost of sending remittances could be brought down by just five percentage points of the value of each transaction, recipients in the developing world would get USD16 billion more per year than they do now. 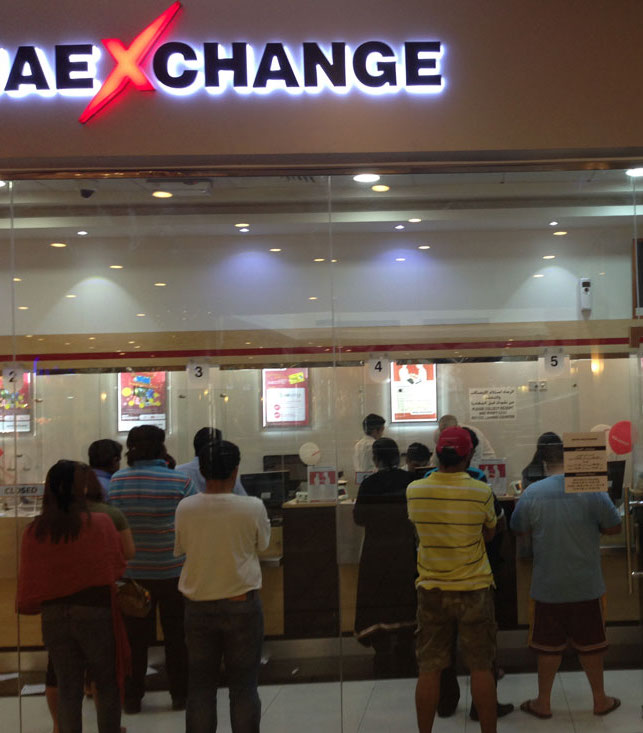 Services open in the GCC

The picture is not all bleak though. Some money transfer services in the Gulf remain operational despite lockdowns, and a new crop of fintech companies that make mobile money apps aimed at migrant workers are gaining momentum.

Branches of money exchange houses in the UAE  which are outside of malls should remain open,  according to Osama Al Rahma, vice-chair of Foreign Exchange and Remittance Group (a UAE industry body) and CEO of Al Fardan exchange.  Some remittances companies and banks have come up with novel ways to help migrant workers manage their money during the coronavirus crisis.

Commercial Bank in Qatar announced earlier this month that it is launching a special payment card and mobile banking product for domestic workers, which will allow customers to send money home without leaving the house.

Qatar has also announced that anyone can now open a bank account without a minimum balance, a move that is seen as particularly helpful for domestic workers. However,  a certain degree of web-proficiency would still be needed to carry out online transactions.

Western Union is trying to keep retail services open as much as laws and restrictions permit, the money transfer giant said on its website. But it encourages customers to use an app or online services as much as possible during the crisis.

Newcomer Denarii Cash, an app aimed at Filipinos, has reported a surge in users since the coronavirus crisis and has gone from just 20,000 users in December 2019 to 527,000 in March 2020, the company’s CEO told The National.

And there was more good news for migrant financial services just before the pandemic erupted, when Rise, a Dubai-based mobile banking platform aimed at migrant domestic workers, clinched over USD1 million in an investment round, enabling it to expand into Bahrain and Saudi Arabia.

But apps and new online services may be of little comfort to those whose relatives do not have a bank account and have to collect remittances in person and in cash in their home countries.

A growing number of migrant workers use mobile banking apps such as Now Money, Denarii Cash and WorldRemit to send money home. These apps solve the problem that migrants might have faced in physically getting to a bank branch or money transfer agent (which can be a challenge for those working in labour camps and private homes) and the issue of not having a local bank account – something that few lower-income workers in the Gulf can avail. But they cannot solve the problem faced by relatives at the other end of the transaction, who collect cash in person at banks or agents if they do not have a bank account.

Nepali migrants and their families are also reporting difficulties collecting those remittances at the other end due to local banks and money transfer agents being closed because of the lockdown.

Laxmi, a Nepali woman whose husband works in Qatar, told The Nepali Times that the cooperative that she usually collects remittances from is shut, while the nearest bank is a 30-minute walk away – a journey that she cannot undertake now.

“The work we are doing is for our families. What is the point of working during such risky times if our families continue to struggle?” Krishna, Lakshmi’s husband, told the publication from Qatar.

Lakshmi says that they borrowed money from friends to pay for Krishna to go to the Gulf, and that they are now calling on her to repay them as they themselves have fallen on hard times.

Nepal Rastra Bank, the country’s central bank and regulator, has asked banks in the country to provide services at least for a few hours a day, and has sent a circular to remittance companies to ask that they do the same, the Nepali Times reported.

Although India is on strict lockdown, banks are allowed to remain open for a handful of essential services, including remittances. However, the Indian Bankers Association, a lobby group, has been warning the public not to go to banks unless absolutely necessary, and to use online and mobile banking instead.

India was the world’s largest recipient of remittances in 2018, with overseas workers sending a total of $79 billion home, according to the World Bank.

Despite the demonetisation policy of 2016,  a bid to get the public to switch to digital payments, huge swathes of the country still depend heavily on cash for day-to-day life.

Only 63% of adults in India have access to a bank account, and this figure is likely to be lower in rural areas, according to a 2019 report by the Neilsen research firm.

WorldRemit warns that many of the usual cash pickup points across the world are either shut or operating with reduced hours due to the pandemic. WorldRemit can be used to send money digitally, but also gives the option for remittance receivers to collect cash from various partner organisations such as banks, pawn shops and remittance agents. In the Philippines, all BDO Remit counters in SM Malls (a large chain of shopping centres) are closed, but some branches of RD Pawnshops and Villarica Pawnshops remain open, while in Sri Lanka, cash pickup services are still available, according to the company.  But in some countries such as Mauritania, cash pickup services are completely unavailable. WorldRemit says that they are working to get the service back up and running again as soon as possible.

The negative impact of the Covid19 crisis and related restrictions on the most marginalised populations will continue to multiply in the foreseeable future. Non-payments and loss of jobs aside, there is a pressing need to mainstream alternatives to cash and conventional banking transactions, so that those who are still paid are able to support their family. Mobile wallets such as Google pay and local options like Paytm in India or mPesa in Kenya have a growing base of users, with even small vendors using this cash-free option. However, many of these options are still restricted to urban or semi-urban areas.