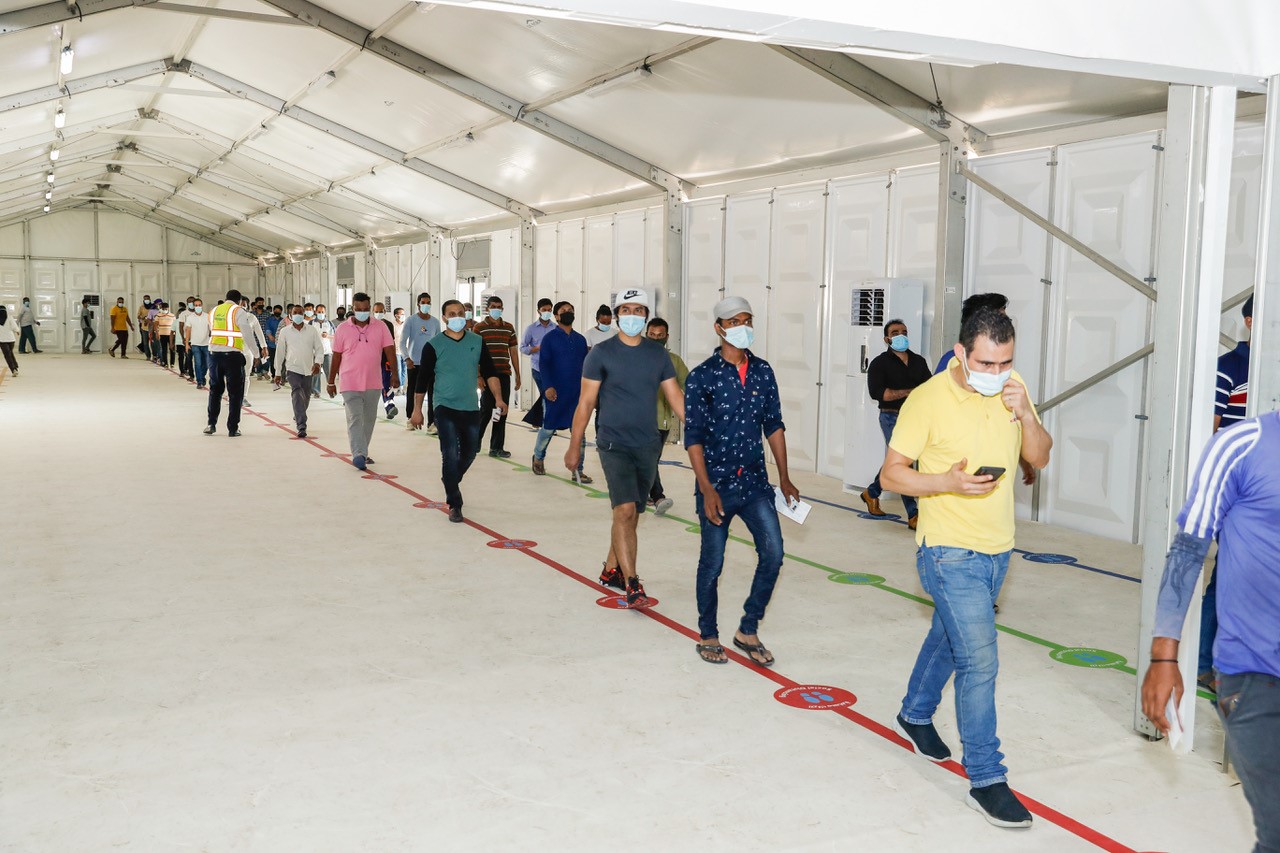 Close to 400 nursing technicians, physicians assistants and other staff at the Qatar Vaccination Centre for Business and Industry Sector have not been paid for two months. The staff are employed on temporary contracts at the Bu Garn vaccination centre, which was established at the beginning of this year to primarily cater to blue-collar workers. The new centre replaces the previous one that was operating from the Industrial area from June to October 2021.

Employees told Migrant-Rights.Org that those categorised as nursing technicians are medical practitioners who have nursing or medical degrees, and that many of them were employed at the previous centre as well. According to some of them, salaries due in the last two months of their earlier contract are only now being settled. The nursing technicians are primarily from India and the Philippines, and draw between QR8000 and QR9000 (USD$2,100-2470) a month, and work 12-hour shifts, five days a week. The staff are not entitled to overtime pay and end-of-service benefits as they do not have permanent contracts under the country’s labour or public sector laws.

The contracts reviewed by MR were under the Hamad Medical Corporation. Staff were told that the delays are due to internal processes, but were not promised a timeline for settlement. Migrant-Rights.org has written to the Hamad Medical Corporation and the Primary Health Care Corporation (PHCC) that is responsible for the centre and awaits their response.  This case of non-payment is one in a slew of cases in recent months. [Update: HMC's response in sidebar]

“Hamad Medical Corporation confirms that all temporary staff employed at the Qatar Vaccination Center for Business and Industry Sector – which opened on 9 January 2022 – have received their salaries in accordance with the agreed contractual terms.

Therefore, all temporary employees received their January salaries in mid-February, and the February salaries will be paid by Sunday 13 March.

HMC operates in full accordance with Qatar’s labor laws. All staff employed by HMC on temporary contracts are receiving salaries based on their contract terms, which do not include end of service benefits. All overtime payments are being made for staff who are eligible.

HMC is deeply grateful to all temporary staff working at the Qatar Vaccination Center who have played a crucial role in Qatar’s swift efforts to vaccinate the country against COVID-19. Many of the staff currently working at the center were previously employed at the vaccination center in the Industrial Area in 2021 and received their salaries in full without delay.”

The pandemic has stretched resources of the public healthcare system in the last two years, leading to extension of work hours without adequate compensation, and denial of annual increments.

In March 2021, front line workers of the PHCC raised a public petition against the increase in work hours and the reduction of benefits. According to Doha News, the petition highlighted

“persistent and ongoing changes to work and conditions, like reduction in allowances, holding off ticket encashments for unexplained reasons, suspension of annual leave twice during the pandemic, despite having sufficient clinical staff to manage the crisis [...] gas and electric payments were also dropped from QR 600 to QR 450.”

In August 2021, PHCC healthcare professionals were notified via email that they would no longer receive annual increments, retroactively from April 2021. This meant those who did receive increments from that date would have the amounts deducted from their salaries. Doha News reported that the increments were part of HMC policy and the application of the Government Human Resources Law.

The management of quarantine facilities and vaccination centres required extra personnel, which was made even more difficult by continuous cost cuts to public healthcare. While volunteers and subcontractors were used for the former, temporary staff were recruited for the latter.

Qatar’s public healthcare system has so far been the most inclusive and accessible for all residents including lower-income migrant workers, made available at a nominal cost. However, in November 2021, Law No 22 of 2021 regulating health services was published in the official gazette and will come into effect on 4 May 2022. According to the Ministry of Public Health, the new mandatory insurance will apply for all non-Qataris in the country, including workers and visitors.

This mandatory law will open the market up to private insurance companies, driving up costs of healthcare coverage for employers, and varying degrees of access to clinics and hospitals, sometimes discriminatory, as seen in other countries in the region.

According to legal firm Clyde & Co’s insights on the new law: