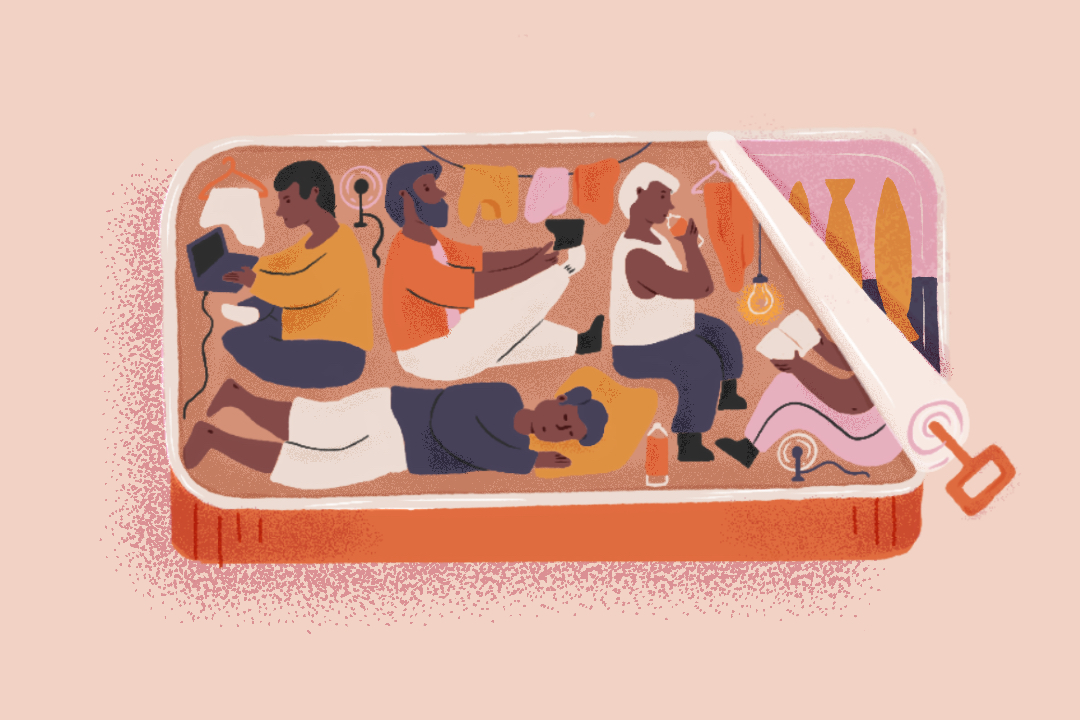 This article is going to be blunt. And probably a little biased. And so, here goes.

As I write this, I'm on the top bunk of a double-decker bed, listening to a symphony of snores, air conditioning, and rather noisy traffic. I have my earphones on. I usually write to music. This time, I can't find any music fitting the seriousness of this article. And so, I lie here in the darkness. And silence. Relative silence, rather.

I share the 4.-something by 4-something metre room with five other people, six metal lockers, and an assortment of personal effects, which by their nature, cannot fit into said lockers. Some of the effects are placed under the bed, some on top of the aforementioned lockers, and some, pretty much anywhere there's space. What all this means is, the room gets really congested.

Just to give you an example, when we're getting ready for work, all of us occupy the same narrow strip of space left after the beds and lockers take the lion's share of the real estate.

So, we're getting ready for work, right? First of all, depending on where your locker is situated, you have to dodge anywhere between two and five roommates as you meander through, assuming you're coming from the shower. There were eight shower cubicles for 72 of us.

So, you get your stuff, then you have to maintain constant situational awareness, to avoid bumping into at least two people, as you bend forward to put on underwear if you didn't do that in the shower. Even if you did that in the shower, it doesn't make any difference. You still have your trousers. Bend forward you must.

Again, situational awareness is paramount when putting on your shirt. Wouldn't want to clock a guy's jaw by accident. Even if it were an accident, it wouldn't be perceived as such. Tensions are already high within this petri dish of a room, and you wouldn't want to aggravate matters.

The room is so small that some of us, on some days, opt to wake up a little later, to avoid the hassle. I mean, when you have to wait turns to make your bed, how big do you think the room is? Funny thing is, we work for a certain company, a subsidiary of Qatar Foundation, and someone from the company actually came and inspected and approved the arrangement. This is really interesting because everyone in our line of work knows how the Qatar Foundation is strict and noble when it comes to employee welfare.

"...we work for a certain company, a subsidiary of Qatar Foundation, and someone from the company actually came and inspected and approved the arrangement."

Lots of unanswered questions there.

My plight is the same as, if not better than, most of the people living in the accommodations spanning the entirety of the Industrial Area. If I had to describe life here in one word, it would be: bleak.

I'll probably do an article on that, but for now, let's forge ahead.

Six people in one room seems tolerable if you compare it to those sleeping eight in a room. I personally have been a guest of such hospitality. It was dehumanising. I have also peeked into certain rooms, belonging to different companies, that carried a similar number, albeit with deplorable hygienic conditions. I remember feeling a blend of emotions.

First was disgust at the state my eyes beheld. Second was pity for the inhabitants. Third was appreciation for the better conditions on our side. Fourth was confusion over how and why such a thing happened. Fifth was ire. Sixth was melancholy.

These hit me all at once.

These are not all that I felt.

Six people in one room is bad. Eight is preposterous. Ten is uncalled for.

Yes, I have heard of some camps having ten people sleeping in one room. Some even more. Now, I cannot verify (see sidebar) this, but I would be more surprised if it were false than if it were true. These things are happening.

When I mailed them...

At the time I began writing this, some two months ago, we were staying six people to a room. Due to the ‘threat’ of COVID-19, we were shifted to a certain villa compound not far from the Industrial Area. The move was more of a business decision than a precautionary measure because the closure of access to and from our camp was imminent. Here, we now sleep eight people in a room pretty much the same size as the one we were in before. And now, I can verify that I have personally seen ten people in one room; the room next to ours. And as if that’s not enough, the front door downstairs has been shut, thus converting the living room into a sleeping area, which now holds six double-decker beds. That’s twelve people living in the living room. Twelve! And there are four bathrooms for the 54 of us

By my calculation, the whole villa accommodates over 54 people in six rooms. Our company has two villas in this compound. So that’s over a hundred people. It’s a wonder how the neighbours, Qataris, haven’t noticed that many people going in and out.

I composed an email, several actually, to the Ministry of Labour. Sometimes I’d cc the Ministry of Interior. The emails were very well articulated, with the violations listed against the required standard. I even attached the PDF of the regulations and the precise location of the property. I always got the same response. Here it is. Word for word. Without even altering the format. Or grammar. Or punctuation.

In the event of a labor complaint

With details of the complaint to be submitted

For obvious reasons, I couldn’t do that.

My biggest concern is whether the authorities are even concerned about this because I know for a fact that they are aware of it.

Qatar has regulations in place for accommodation standards. Regulations like the number of beds in a room, shared sleeping arrangements, ventilation, personal storage space, the ratio of communal toilets and bathing facilities to people, indoor and outdoor recreational facilities, etc. For example, the regulations state that for every bed there must be at least 6 sq.mt. of space, and 1.5 m as the minimum space between adjacent beds, separated by – get this – a privacy screen or curtain!

We see that, according to Qatar's Labour Law, workers are supposed to live rather decently, but the reality, in most cases, is one of squalor. So, why does this happen?

From my conversations with work colleagues and other acquaintances, the general consensus is that it all revolves around money. See, it's a whole lot cheaper to cram a lot of people into one structure than to comply with the regulations. Having the required number of people in a room would translate, essentially, to more rooms in general. More rooms translate to more money for the extra space. And so, the more people you shove into a room, the more you save. It's someone's business after all, right? Savings are always welcome.

For example, why pay QR100,000 for accommodation when you can double the number of occupants per room and pay only QR50,000?

Sadly, it usually comes down to monetary factors.

"...the more people you shove into a room, the more you save. It's someone's business after all, right? Savings are always welcome."

That's one reason why things are the way they are. Another one is the lack of information on these regulations. Most migrant workers simply don't know that such regulations exist and that they are readily and freely accessible. This information, together with the Qatar Labour Law, should be shared with them starting from their home country and again upon arrival and periodically throughout their time here. I believe every worker or anyone in general who finds themselves in a less than ideal living arrangement should be able to report such violations right down to the exact requirement. And this requires knowledge of the regulations in place, and the proper channel in which to raise the complaint. Which brings me to the Ministry.

Impromptu inspections need to be carried out by the labour officials. And more importantly, complaints against the employer must be followed through by an inspection, and the necessary corrective measures – after some form of penalty, of course. The heftier the better. This should serve as an example to the rest. You do NOT mess around with human rights.

That being said, the Ministry needs to implement an anonymous reporting system that protects the employee from retribution from the employer. Fear is another reason why accommodation violations still persist. No one wants to risk their job by coming forward. To spend a fortune on recruitment charges, and then to lose a steady source of income far outweighs the resolve to come forward and file a complaint. It's better to keep your head down and get your money – for those who are fortunate enough to receive theirs regularly. Yes, unpaid wages are still a thing.

"The Ministry should do this. The Ministry should do that." Basically, that's where we are. And it all seems like wishful thinking. I mean, let’s not forget that even the labour law reforms currently underway are really credited to international media scrutiny and human rights advocacy. Until more is done by the government to ensure workers live in dignity and decency, here in Qatar, home is where your employer sees fit.

Footnote: While the above article is the lived experience of a worker in Qatar, it reflects the living conditions of workers across the Gulf

How Qatar Can Learn From Qatar Foundation