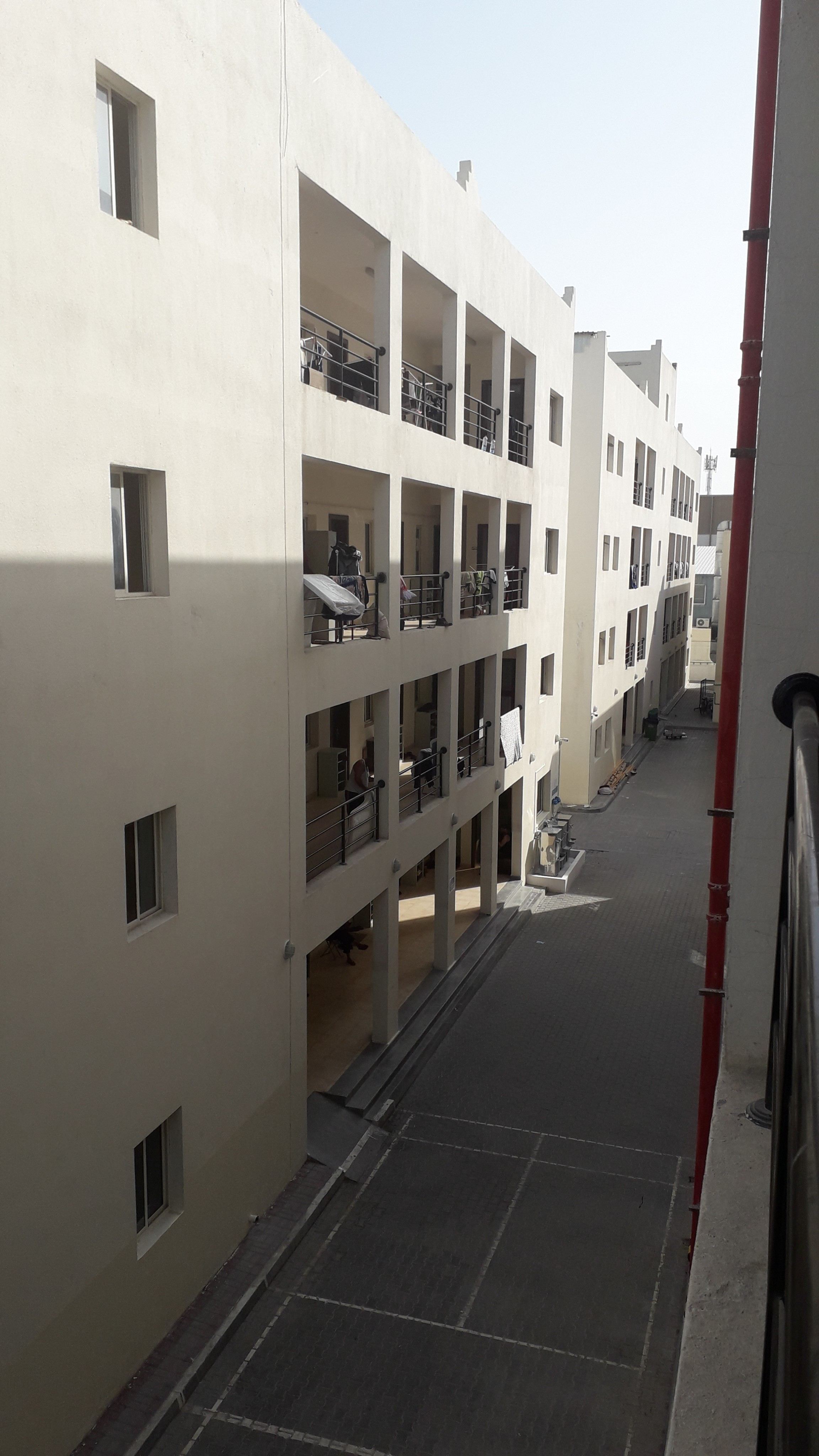 The GSS Certis camp in Doha's Industrial Area, which houses over 2,000 of its employees.

Meet GSS Certis, the star of two of my previous articles. With contracts in hospitality, energy, transport, aviation, banking, education etc, it is by no means a small company.

The articles documented living standards within an Industrial Area accommodation, and a villa compound in Al Waab run/managed by Rastec Villas. We were relocated due to the imminent closure of the Industrial Area brought about by the Covid-19 pandemic, and when the government reopened the area, we were shifted back on 21 June to the old accommodation and living conditions.

The living conditions in question: six people crammed in a relatively tiny room, with three bunk beds, metal lockers and personal effects taking up a huge chunk of the space. The number of toilet and shower facilities fell short of the ratio stipulated by government regulations. There were over 2,000 of us in the ‘labour camp’. Cafeteria food quality was appalling and certainly not inclusive of all ethnicities. There were many issues with the company at the time, but the living conditions were the most pressing because that's what you came back to after work, where you spent a huge part of your time, second only to your job.

I saw fit to report this arrangement to our high-profile client, whom I believed to be unaware of the situation. After a reasonable amount of time had passed without a response, I took the matter upstairs to Qatar Foundation, the parent company. They responded to the email, but nothing materially came of it. Next stop, the Ministry of Labour. This entity didn't even acknowledge the email. All they wanted me to do was file a complaint, which I couldn't do – identity concerns and all...

We got them because we knocked on the right doors. Companies are generally sensitive to their public profile, especially negative portrayal in the media.

We contacted both Certis and GSS Certis for their comments. The company refused to comment, and said: “Our management in Qatar would like to inform that we are not able to participate in any interviews at the moment.”

It was only after Migrant-Rights.org published my reflections that things changed for us. As I mentioned, on 21 June we were shifted back to the Industrial Area, back to the pre-Covid19 situation. Two days later though, we came back to three people per room, single beds, bedside table with a small lamp. The extra space was instantly noticeable. On the 27th, our client finally came to inspect, although we don't know what their findings were. Nevertheless, the change was welcomed by all.

And by all, I mean all of us contracted to work for the Msheireb Downtown Doha project. The remaining blocks within the accommodation still house six people, crammed into tiny rooms. They too deserve similar changes. Everyone in the camp, in fact, every worker in Qatar, deserves a decent place to come back to after a long day's work. Or night, for those working night shifts.

Mind you, we didn't get these changes because our client was high-profile. We got them because we knocked on the right doors. Companies are generally sensitive to their public profile, especially negative portrayal in the media. E-mail them, and they won't really do much. However, mention them in an article or tag them in a tweet, and the cogs start to turn. Most of them anyway. Some companies/institutions either couldn't care less or choose to remain silent.

What's shocking is that the majority, if not all, of the guards employed by GSS Certis and housed in our camp work for some very big names here in Qatar and around the world. Starting off with Hamad International Airport. Yes, the one and only. Moving on, we have Alfardan Properties, Mannai Corporation, Kahramaa (Qatar General Electricity), Sephora, Intercontinental Doha, Fraser Suites, Qatar National Bank (QNB), Commercial Bank, Ministry of Municipality and Environment (Baladiya) deputed at the Al Bidaa Park and a couple of international schools, among others.

One guy, deployed to QNB, who was in 'isolation' with his colleagues said, "Y'all are so lucky!" which as I think about it now, is wrong on so many levels. Luck should not be a determining factor in employee welfare. Decency should be the bare minimum.

"So you guys are living like kings now, eh?" marvelled another guy, as he beheld the layout, eyes sweeping every inch of the room, head seemingly on a swivel. He had been downsized from the Msheireb Downtown Doha project and was now out of work for three months.

One guy, deployed to QNB, who was in 'isolation' with his colleagues said, "Y'all are so lucky!" which as I think about it now, is wrong on so many levels.

Yet another guy, who had been under Jaidah Group, but now out of a job for close to six months since he came back from his vacation, shared my sentiments: that the changes should apply to everyone, especially in light of Covid-19 and the recommended social distancing.

If you happen to find yourself out of work, you are 'supposed' to get your basic salary (750QR) plus food allowance (200QR). You then have to figure out how much you're going to spend on sustenance, either by subscribing to a meal plan or buying individual meals daily, all from the same cafeteria. With the monopoly they enjoy, they get away with appalling food quality and non-inclusion of the different ethnic tastes within the camp.

Some end up spending more than they have to. Others can only afford one meal a day, or what resembles a meal, while they wait for the chance to be able to work again and earn their wages in full.

The deterioration in the health of young, able-bodied men within months of arriving in the Gulf states and the high rate of mortality has been a cause for concern for long. And these living conditions could well be a contributor.

It's not just the clients who are high profile; GSS Certis itself is a subsidiary of Certis, a wholly-owned subsidiary of Temasek Holdings, a Singapore-based investment company.

Like us, some were moved to other places due to the closure brought about by Covid-19. And like us, some will be brought back. For those who won't, they are the lucky ones. The Industrial Area is no place to live.

And though the company no longer provides security services to St. Regis, The W Hotel, Westin, Wyndham and Marsa Malaz Kempinski, when they did, they also let security personnel live in the same conditions, operating between two accommodations just across the road from each other.

Actually, let me take this opportunity to say this. Accommodation within the Industrial Area should be outlawed. Not only is it indecent, but it is also hazardous – dust (which almost always contains harmful particulate matter), fumes, noise, the toll on mental health, fatigue, etc. More benchmark accommodations like Barwa Al Baraha and Asian City should be set up with all the facilities and amenities specified by the government.

The Absent Voices of Second-Generation Migrants in the Gulf States