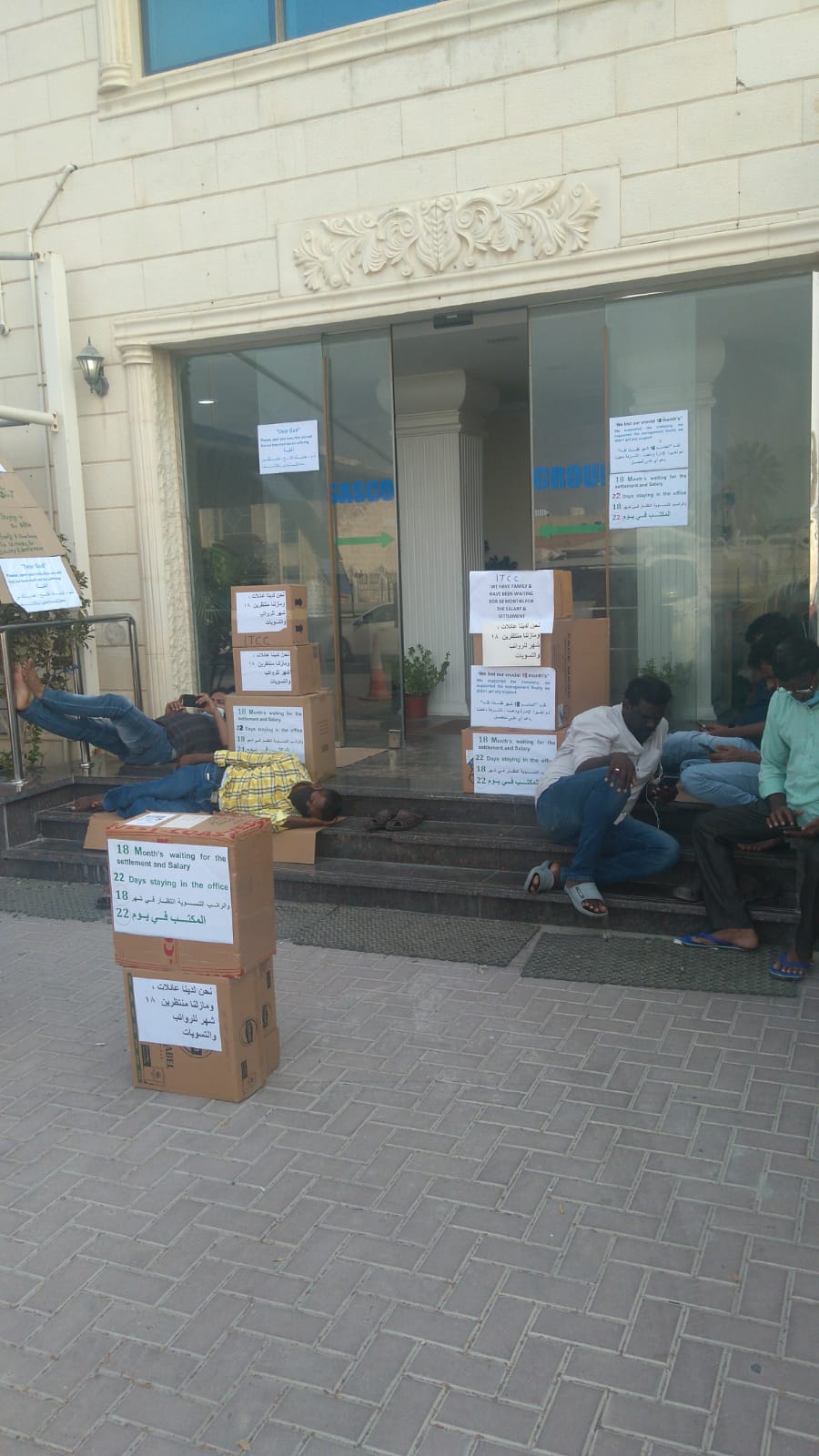 Employees of ITCC camping outside the headquarters, protesting months of non-payment

About 550 employees of a once successful Qatari company – Imperial Trading and Contracting Company (ITCC) – have been protesting non-payment of wages for over 11 months, which has pushed them and their families back home to destitution. The employees have been taking to the road outside the company’s headquarters in the Madinat Khalifa area of Doha, with nearly two dozen of them sleeping outside the offices. The works are primarily from India, Nepal, Bangladesh and Egypt, and have worked for between five and 13 years with ITCC, which is part of the SASCO group of companies.

ITCC worked on several high profile projects including the Gharafa stadium (for the Qatar Olympic Committee), Al Rayyan Palace, Katara shopping mall as well as a few for Ashghal and Kahramaa, which are government agencies.

The chairman of the company, Abdulla Khalaf Mansoor Al-Kaabi, was jailed following a police complaint in April, but some of the employees say he may have been released since. Additionally, the arrest did little to alleviate the problems for the 450 workers and roughly 100 staff. While the former have not been paid for nine months, the latter have not been paid for nearly a year. Due salaries alone amount to about QR1.3 million (USD357,000), with final settlements of those who have resigned amounting to another QR900,000 (USD250,000).

In October 2018 Qatar set up the Workers Support Insurance Fund in order to pay workers without delays and recoup payment from employers later. However, this procedure has not been executed in this case.

Qatar: Law No. 17 of 2018 Establishing the Workers’ Support and Insurance Fund

The fund aims to support, ensure and provide care for workers, guarantee their rights and provide a healthy and safe working environment for them. In particular, it is tasked with (Art. 1):

The fund shall receive for its annual budget 60% of the fees collected for workers’ permits and their renewal (Art. 4).

Migrant-Rights.org spoke to several affected employees, all of whom say they have exhausted every avenue available to file complaints, none of which yielded any results. This is not the first time that such protests were held. In June 2019, a few hundred workers protested outside of ITCC’s offices because they had not been paid for six months. The police intervened and advised them to not return to work until they were paid. Over the next two months, they received their six months salary in instalments.

At this point, the company had two ongoing projects, both prestigious – Manateq (whose chairman is Ali bin Ahmed Al-Kuwari, the Minister of Commerce and Industry) and Al Meshaf Health Centre (under Ashghal).

According to ITCC employees, all of the clients have paid on time, but work on both these projects have in fact been delayed, drawing penalties.

Salary payments stopped again from November 2019. Labour and staff staged regular protests over the next few months. In March 2020, a memo signed by the company chairman provided a schedule of payment, as per which all dues were to be settled by May 2020. Last year, 50 staff had resigned. No promises were made on their final settlements. MR has reviewed all of these documents.

The company said a bank loan would be taken in order to settle the dues. However, with a police case filed and the arrest of the chairman, the bank loan was not sanctioned. The Madinat Khalifa police forwarded the case to the labour department.

In 2016-17 there was a change in management. Until that point, the company had been hugely profitable with some high profile projects.

“The new management just messed it up. I have been with the company from the beginning – 13 years. I helped build the company, and now I am left with no money, begging them to pay me,” says an employee from South Asia.

The employees are now in a great dilemma. The company has made it clear employees can go back to work and their payments would be made in instalments, or they can give up their claims and seek a job elsewhere or return home. Most of their Qatar IDs (QID) have expired, and in order to change jobs, they will still need the company to reactivate it. For those who have resigned, ITCC has offered a settlement of 30% but demanded that they sign a paper stating they have received all their entitlements. In desperation, 14 of them signed such a letter and received their diminished settlement. Qatar has made it easier for workers to change employers, however, expired QIDs and months of non-payment make it difficult for workers to give up their claim and move on.

Another employee breaks down speaking of his case. “I haven’t paid school fees for my children for five months. The school wants to kick my kids out of school. My family at home don’t believe that it is not my fault. So when the police came in 40 vehicles and threatened us with arrest for protesting, I told them to shoot me. I would rather die. What option do I have? Who will pay for my family’s food?”

The workers are still in the company’s accommodation in Industrial Area Street 38 and receive food, which they say has been deteriorating in quality. The staff are scattered around the city, but they spend most of the time now outside the headquarters.

“We had this big meeting on 25 August with the chairman’s son, and that’s when he said he will give 30% settlement to those who have resigned and the rest should continue working to receive their dues.”

The last three weeks, about 20 to 30 staff have been camping at the head office. “The son does not come, but the chairman’s wife comes every day. We have to be very careful. We don’t talk to her or look at her because we know that will be used against us,” according to one of them.

The embassies of the countries the workers come from have not been helpful, they say. “They don’t even give us a glass of water when we go there to complain, you think they are going to help us with our money,” a Nepali worker says.

Note: The Gharafa Stadium is not a World Cup venue as previously mentioned. The error has been corrected.