The LMRA signed a Memorandum of Understanding on Thursday 23 October with the Ministry of Justice, Islamic Affairs and Endowments, to provide technical support in dealing with lawsuits.

Earlier this year, the LMRA launched a new unit to assist migrant workers with compiling relevant documents and submitting them electronically to the Labour Courts. As our previous report pointed out, the new unit may help in reducing barriers to filing initial labour complaints. But workers are responsible for following up on their case themselves at the labour courts, a task that is difficult for many lower-income workers who cannot afford lawyers.

But since the Covid-19 crisis, the Labour Courts have moved online, and many workers are finding it increasingly difficult to attend hearings and know the outcomes of their legal cases. Workers can only follow up on their cases at the courts via an “e-key” through the Justice, Islamic Affairs and Endowments Ministry website, or through a lawyer designated with their power of attorney.

Khamis*, a Kenyan worker who recently filed a lawsuit against his employer for non-payment and unjustified termination explained to Migrant-Rights.org the challenges he faced in following up on cases online:

“I took them to the court but due to corona, everything was done online. There are a few challenges I faced. I couldn’t access the online service  [court case] without an E-key, you must have an e-key. The second challenge is that the website is only in Arabic and the third problem, you have to know what to select if you have a case in the court, you have to know which part of the form to fill and which part not to fill. And you are not allowed to physically attend the court. You also don’t have the accurate number to call the courts about your case.”

Khamis told MR that he had to ask for help from his Bahraini friends to translate the online forms on the website and mobile texts from the Justice ministry about his case. Eventually he sought assistance from migrant community groups that assigned him a lawyer to help him with his case.

Khamis was one of the few exceptions. Many workers are without support and were not able to follow-up on their case due to lack of information and knowledge on how to navigate the online court process. Several of them have lost their lawsuits as a result.

A group of Bangladeshi construction workers who filed a lawsuit against their employer for non-payment told MR:

“We received a text from the court in Arabic telling us to attend a hearing at a specific date, it didn’t say anything else, we went to the courts in June and there, the security shouted at us, and told us why we came to the courts and that we have to do everything online now. But we did not know anything, we don’t know where our case stands.” 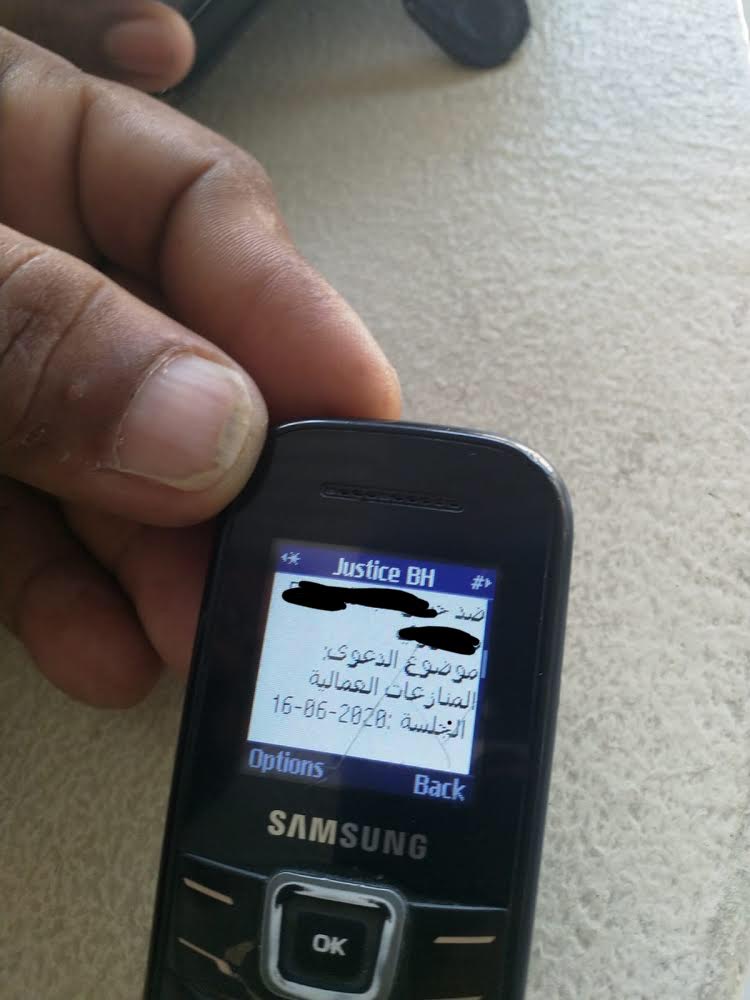 According to a lawyer MR spoke to, in some cases - due to complications arising from the online system and the fact that LMRA only assists in registering the initial case at the justice ministry and not filing replies and following up on cases - several workers did not claim their dues or compensations.

According to the LMRA, with the new MoU and system in place, workers will now receive their case number, know of court hearing dates and court outcomes through qualified translators in several languages. It is to be seen how the new system will function, but this move, although implemented late, will help reduce barriers to justice.

Having said that the structural vulnerabilities of the dispute system are still in place. The process is too slow and workers do not have the wherewithal to endure such delays. When companies declare bankruptcy, there are delays in implementing even favourable rulings. And there are no mechanisms to prevent employers from filing cases against workers who have complained.

To address the above issue, the LMRA could assign lawyers in its Grievance and Protection department to provide free legal aid and take up Power of Attorney on migrant workers behalf who are forced to leave the country. The LMRA could then transfer the recovered wages and dues to the migrant worker’s bank account in their home country in coordination with embassies or foreign missions.

The government of Bahrain can also identify sources of funds that can be drawn upon to pay workers wages if the employer is genuinely unable to pay the settlement, this could be an insurance fund paid for when companies issue work-permits or from the unemployment fund, which migrants pay into anyway. Any payment from such funds can be recouped from employers either through liquidation or selling of assets.