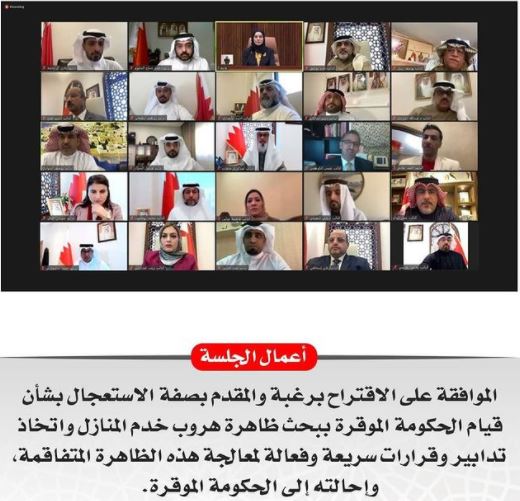 Bahraini MPs unanimously approved an urgent proposal on Tuesday that requests the government to take immediate and tougher action against “absconding” domestic workers.

The proposal, if enacted, will require domestic workers who leave their employers without permission to reimburse their sponsors, pay for their own repatriation costs, and punish those sheltering them with jail and fines. Absconding charges are one of the most exploitative provisions under the kafala system, leading to employment relationships that can only be described as modern-day slavery.

The latest proposal comes one month after the Council of Representatives passed a bill that would require migrants to work for three years with their current sponsor before they can transfer to another sponsor.

During Tuesday’s parliamentary session, the proponents of the proposal, based on unsubstantiated information, claimed that the number of absconding cases among domestic workers is on the rise due to “gangs” and “mafias” luring workers away from employers' homes to work by the hour or indulge in “immoral activities” for higher pay.

MP Khaled Bouanq, who spearheaded the proposal, falsely claimed that government authorities do not punish absconding domestic workers, but instead provide them with a Flexi-Permit. In fact, the Flexi-Permit scheme excludes domestic workers, and those who leave their employers are immediately charged with absconding. Bouanq bolstered his argument with another false, xenophobic statement, claiming that “some domestic workers have dangerous diseases, not just Covid-19, which they will be spreading in the community.”

While the MPs made several more similarly flawed claims as to why domestic workers “abscond,”  at no point did they mention that domestic workers leave their place of employment due to abuse and mistreatment.

MP Ebrahim Al Nefaei, apparently unaware of the fact that employers often refuse to pay for the repatriation of their “absconded” domestic workers, asked, “Why should a citizen pay for a domestic worker who runs away?” He added, “When we want the violating housemaids to pay for their return tickets we see human rights organisations like Amnesty International jumping on the issue. In the end, these organisations are never happy with whatever we do.”

The proposal comes after Labour and Social Development Minister Jameel Humaidan revealed last month that 2,596 domestic workers had absconded since December 2018. Heavy media coverage followed which inaccurately framed the issue as a “crisis,” even though the absconding rate is not higher than in previous years. The latest available data shows that roughly 87,000 domestic workers were employed in Q2 of 2019, meaning the rate is less than 1.5% per year, which is very low especially considering that there are no accessible legal avenues to resign and change jobs.

In reality, absconding charges are heavily misused by employers, especially against domestic workers, to prevent them from leaving abusive situations and complaining.

Bahrain has one of the weakest legal protections for domestic workers in the GCC. While domestic workers are incorporated into 13 Articles and 2 Titles of the 2012 Labour Law, which include provisions such as paid annual leave, end of service benefit and access to mediation in a labour dispute, they remain excluded from critical protections, such as a minimum wage, limits on working hours, mandatory rest hours or weekly days off. Bahrain’s recent tripartite contract does not address these gaps, as it is up to the employer to determine the working hours, minimum wage, and rest time.

Criminalising workers for not continuing in a workplace – abusive or otherwise – is forced labour. Bahrain, which has Tier 1-status as per the US TIP report, must do better to protect the rights of workers. By not allowing workers to formally leave employment they are not happy with, the state itself creates a black market where unscrupulous agents and employers profit from providing illegal recourse for the affected parties.  Migrant-rights.org urges the government of Bahrain to reject this proposal, to include domestic workers in the Labour Law and to decriminalise “absconding” charges for all workers.