“Will wait and see…”: Refrain of expats to Qatar’s Kafala ‘reforms’

Qatar’s new law regulating the entry, exit and residency of expatriates comes into effect today. It has received mixed response from foreign workers in the country.

Some expatriates fear that the new law still gives employers too much  power over employees. But others believe it gives foreign workers a new way out by giving the state a broader role to play, especially in case of a dispute with the employer.

Law No 21 of 2015 affects the 2.1 million foreigners who make up more than 85 percent of the population of Qatar, and over 93 percent of the workforce.

The law’s key reforms include options for workers to change jobs at the end of their contract and apply for exit permits without their current employer’s approval. Authorities purport that the new law abolishes the existing Kafala system, replacing it with a contract-based system. However, as Migrant-Rights.org earlier analysis revealed, the law appears to repackage old practices and continues to be restrictive. Some of the worst practices of the current system remain, including the exit permit requirement, and a loophole allowing passport confiscation. 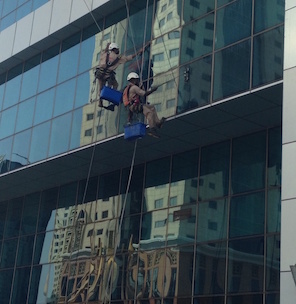 Plight of workers in Qatar – hanging by the thread

An Australian working in the healthcare sector observes that at the end the employer has a role to play in changing jobs and giving an exit permit. "With the experience of how things happen in Doha. we never know whether the facts presented by the employer or by the expatriate will be taken into consideration by the ministries and committees. On surface the new law might look hopeful, but only after implementation, will we actually see how it works. So it’s a let’s wait...”

Sri Lankan expatriate Gayan Ratanakye, an accounting professional who has lived in Doha for more than 10 years, seems even less hopeful. “I find the law more complicated. Earlier, if we decide to change jobs we would ask the employer; if he allows will move or not. But now the ministry gets involved, I don’t think we will be given an opportunity to discuss and negotiate. If they allow us to take the new job, it will be fine. But what if they refuse? What happens next remains a question and it puts us in a risky situation.”

An Egyptian IT professional also dismisses the reforms, “Nothing has changed. It is the same. Still you can’t change jobs just like that. You still need all types of permissions.  One can’t just buy a ticket and go to the airport and go home.  Be from the employer or the government, you still need to get permission,”

Another expatriate worker, a managing director of a limousine company with over 100 expatriate employees, sees benefits in the law’s limited reforms: “Allowing an expatriate to switch jobs only when their contract is over or after five years if it’s an open-ended contract is reasonable for both the company and the employee. In a time of an dispute the committee will hear to grievances of both sides, so the employer cannot do injustice to the foreign worker; and similarly the employee, if they’ve done something wrong, cannot get away with if.”

“The law will be really favorable to low income workers in several ways. Now many are promised a salary before leaving their country and once they arrive are paid far less. The new law makes it compulsory to sign a contract which cannot be changed once the employee come here. And we know there are many low income workers who have disputes especially regarding wages with the employers, the new law will help them a lot in such situations. But the law may not be as effective from the perspective of  white collar workers. However, the new law gives a framework to protect all types of workers,”  holds Mohamed, a Sudanese translator, who has lived in Qatar for five years.

According to the press release, expatriates can present their grievances, with supporting documents on abuse  to the committee secretariat.

The secretariat staff will receive the application and register the case after confirming the availability of all necessary documents. The applicant will be given notification on acceptance of the application with case number and date of acceptance. The case will be raised for decision in the first meeting after the date of registration. The decision will be made within 3 working days of receiving the application.

As per this, acquiring an exit permit could take anywhere between 3 to 6 days.

For a more detailed explanation of procedures, please refer to Qatar daily The Peninsula’s report.

Migrant-Rights.org earlier published a local lawyer’s ready reckoner on the reforms r, that can be read here.

A manpower supply company representative feels the new law might put a stop the ‘free visa’ trade. “It will prevent people coming on free visas, where they buy a work visa, come to Doha, find a job and change the visa under the employer. This can have both a negative and positive impact. It will stop people coming here on a visit visa and finding jobs. At the same time, when they do come here on a visit visa, they are able to study the job market and make an educated choice. This will be prevented. But the law will stop agents selling visas and exploiting people.” He adds, “Officials should also now consider domestic workers, who are not covered under the labour law of Qatar. We are not sure if the new law would be effective on them.”

For Ali, a Bangladeshi who has worked with the same employer for eight years, the changes can only be for the better. “The new law gives me hope, I have been working at the present office for more than eight years and hope to change the job once the new law is implemented. But I will not take a step for some time, will see for like six months how things move.”

Overall, there seems to be sense of jaded skepticism, with even those less critical of the new laws not expecting a sea change in how migrants are treated in the country.

“Do you really think the new law will be implemented from the 13th? I doubt.  But will wait and see, even if they introduce the law, there will be lots of complications. It’s better we just work at the same place and leave as the contract ends,” says Raja, a Sri Lankan taxi driver, who had worked in Qatar for two years, but had to leave and return after the two-year ban, in order to work again.

Prathap, a Nepalese cleaner said, “The company promised us a salary of 900 riyals, but we get only around 700 riyals. They reduce it giving some reason or the other. Whatever law comes what’s the use, we won’t get a better salary, I will leave here by next year.”