According to the General Directorate of Passports, those who avail of the amnesty will not be blacklisted from the country. Normally, deportees are fingerprinted and not allowed re-entry.

- Workers who have overstayed their visa

- Workers who have left their employers

- Workers who came in with a work permit, but did not obtain or receive an Iqama identity card within 90 days of arrival*

The amnesty does not provide recourse for workers hoping to resolve complaints of underpayment or non-payment, which is still a prevalent issue despite the introduction of the “wage protection system.” Workers often escape or attempt to leave the Kingdom, only after exploitative experiences with employers. Amnesties across the Gulf suffer from the same – while they are often a welcomed move by stranded workers (i.e. effectively stranded, those who would face detention, fines, and other penalties if they attempted to leave), they are a band-aid response to systemic migration and employment issues that require real reform; amnesty programs tend to be followed by immigration crackdowns, and are part of a larger cycle of exploitation rooted in  poor legal protections and even weaker law enforcement. 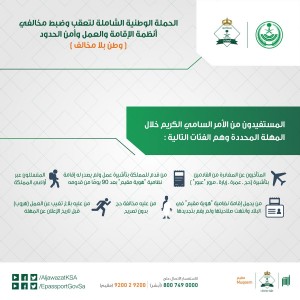 The name of the campaign also raises suspicion; “ #وطن_بلا_مخالف” translates to “Nation without violators.” Certainly, some of those who have violated entry and residency law may have committed a crime. But the campaign depicts the amnesty as an expulsion of criminals. It paints the amnesty as a gracious gesture of forgiveness by the Kingdom, rather than a necessary reaction to the failures of its labour and migration system.

This amnesty appears to be a response to a particular failure: Saudi’s struggle to resolve the issue of thousands of stranded workers. Migrants who have been waiting months for payment may find the amnesty their only feasible solution. They are likely to forfeit claims to due wages, after a string of broken promises from Saudi oil giants and the Kingdom itself, some feel that payment is never coming.

According to government statistics, over 2.5 million migrant workers availed of the last amnesty in 2013. The amnesty, which ran from April to November, was followed by a violent crackdown in which over 800,000 migrants were deported.

MR urges workers wishing to avail of the amnesty to consider contacting their embassies for further guidance.