The Wage Protection System (WPS) is seen as a salve for illegitimate deductions and non-payment of wages, which are the most common forms of exploitation of lower-income migrant workers face.  The WPS makes it mandatory for employers to pay all salaries via a bank transfer.

The UAE was the first to implement this system, followed by Saudi Arabia and now Qatar.

The system is no doubt a measure in the right direction, but it remains only a band-aid treatment if other stifling labour migration policies are not addressed. 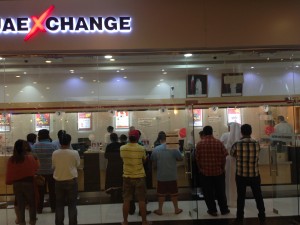 As we saw in the case of stranded migrant workers in Saudi Arabia, the WPS cannot protect workers without the active interest and involvement of authorities. In 2016, over a hundred thousand workers were unpaid for months and rendered jobless, but even if the WPS initially failed to flag the violations, the government chose to deliberately ignore them until international media publicised the plight of these workers months later. Even if the technical design of the WPS functioned perfectly,  the tool is impotent without an invested enforcement environment.

In Qatar, Migrant-Rights.org spoke to a cross-section of workers employed by subcontractors on their experience with the WPS.

Those contracted by large companies with well-stated minimum standards were clearly less susceptible to abuse. However, subcontractors tend to be less committed to workers’ rights, and the workers they deployed to clients were vulnerable to exploitation.

“My bank card (ATM) is with the boss. They deposit the salary on time and withdraw with the card as well. We are paid only in cash during the second week of the month. On some occasions the salary has been delayed by a month,” Ravi*, a restaurant employee said.

“But not bankcards of all employees are with the boss all the time. He keeps some and returns others, especially the cards are taken when we go on vacation and will keep for few months even after we return.”

Afzal,* drives for a limousine company said, “Until last month cards of some of us were with the company, and salary was paid in cash. Now they have returned the cards but we don’t know if it will be taken back or not. When they keep the cards, salaries are always delayed.”

Transport and cleaning companies, in particular, seem to find loopholes to circumvent the WPS since employees work on a commission or hourly basis and in reality don’t draw the salary stated on the contract.

Samir recently changed jobs, taking advantage of the recent kafala reforms that have made job transfers easier (though still cumbersome). With his new employer, he is in possession of his bank card. “But previously I was working as a supervisor at a transport company, which has more than 250 drivers. When the WPS was introduced the company got ATM cards for all employees. But the cards were kept with the company. Once the salary is deposited in the bank, the manager will give the cards to me and two others working with the company. We will go to different ATMs and withdraw the money and handover to the company and the drivers will get their salary paid by cash by mid-month and sometimes one group will get paid and the rest will be paid much later,” he says.

The WPS came into force in Qatar on 2 November, 2015 making it mandatory for employers to pay all salaries via a bank transfer.

The new system is being implemented based on amendments to labour law No 14/2004. A ministerial decision states that employees’ salaries must be transferred to their bank accounts by the seventh day of every month.

The WPS includes monitoring salary payments of employees of more than 50,000 companies in the country. For the purpose of monitoring the WPS, the ministry has set up the Department of Wage Protection in line with the ministerial decision.

WPS also requires companies to submit a detailed payment sheet including wages and overtimes to the Department of Wage Protection on a monthly basis.

Companies violating the law will be barred from applying for new work permits with the Ministry of Labour will cease.

On 2 November, 2016 the Ministry of Administrative Development, Labour & Social Affairs said more than 85%of expatriate workers (about 1.8 million) were receiving their monthly salaries via bank transfer; and that more than 37,916 companies in Qatar are fully compliant with WPS. The ministry also claims complaints about non-payment of wages for the first half of 2016 decreased to 2,676 cases, a 30.4 percent decline from the same period in 2015.

The WPS includes all workers covered by the labour law in Qatar, white and blue collar workers alike. But workers’ interactions with the bank differs markedly. The criteria to open a regular, full-service bank account differs from bank to bank,  requiring upwards of a minimum salary of QR3000. These account holders are direct retail clients of the bank and hold an open loop debit card. These cards can be used in any ATM network.

The WPS makes a bank transfer of wages mandatory regardless of minimum salary. A majority of blue collar workers hold a closed loop card, meaning they can only conduct transactions in specific ATMs of the bank. The bank does not directly interface with individual workers and instead treats the employer as the primary client. The bank charges the company up to QR10 per cardholder per month. This amount varies depending on the number of workers on the company’s payroll.

The Mandoop (the public and government relations officer) of the company applies for and collects all the ATM cards and pin numbers from the bank, and distributes it to the workers. This is the first stage where the WPS is compromised.

Free Visa and the WPS

One of the most insidious elements of the Kafala/sponsorship system is the prevalence of the free visa. A misnomer, the free visa is anything but free. Workers pay upwards of USD5,000 to acquire a free visa in the hopes of greater mobility within the labour market and higher salaries. The person who profits most out of the free visa is the kafeel or employer. Workers pay the sponsor a sum each year or month to obtain a valid residency but work for a number of other employers to actually earn their wages.

To avoid detection under the WPS, the sponsors of those on free visas open a bank account in the worker’s name, hold the ATM card, and make a salary deposit and withdrawal every month.

This does not really impact the workers, as their relationship with the sponsor is only that of a paid signatory and not an employer.

Exploitative as it is, the free visa gives the workers a sense of greater freedom. Migrant-Rights.org interviewed some workers who did not think playing the WPS in this manner was wrong or illegal.

Brijnath is a peer educator who helps workers represent their cases to the labour department. He says withholding ATM cards is the norm with free visas, but is also quite a regular practice even amongst companies that sponsor workers directly.

“I get all kinds of complaints. One company holds one month’s salary as a deposit, promising to pay at the end of contract term. Another contractor whose employees work in construction withdraws the cash on behalf of the workers. They then make the worker sign a register and collect cash. They also cut QR100 every month from what was originally deposited in the ATM.”

While he does try to educate the workers on their rights, most fear confronting their employer as they might risk being benched (temporarily laid off without pay) or terminated.

Most subcontractors operate on ‘pay when paid’ basis, and are unwilling to dip into their cash reserves to pay workers until they have been paid by their client.

Another excuse given is that the closed loop cards make it cumbersome for workers to find an ATM and withdraw money, hence the employer does it on their behalf. An excuse that holds as little water as that given for holding passports for safe keeping.

*All names changed to protect the workers

In the second and concluding part, Noah recounts his experience of the two vastly different stints in Doha, Qatar.