Sorcery and domestic workers – the abusive narrative persists in Saudi

On June 10, the Saudi Committee for the Promotion of Virtue and the Prevention of Vice (CPVPV), commonly known as the Saudi religious police, detained a domestic worker because she threatened to cast a spell on her employer’s family.   Authorities offered no more details. Such stories are common in Saudi media.

Oftentimes, merely an accusation of practising sorcery or magic can lead to the arrest and deportation of migrant domestic workers. The repetition of such vague news items strengthens the widely-spread stereotypes of domestic workers as sorcerers who cast evil spells on their employers to gain their affection, extort money from them, or otherwise physically and emotionally harm them. 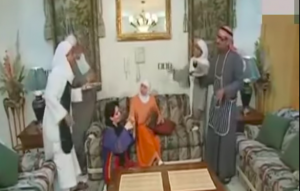 A scene from the Saudi TV serial Tash Ma Tash

The image of domestic workers as a sorcerer is used extensively in Saudi entertainment TV shows. The critically acclaimed comedy TV show Tash Ma Tash, in an episode titled “A maid in our house,” narrates the story of a Saudi family hiring a domestic worker only to discover she practices sorcery. The domestic worker, who is markedly silent throughout most of the episode, starts developing what the family perceives as an inexplicably odd behaviour. In their attempts to investigate their worker’s behaviour, the family invades the worker’s privacy by storming her room and searching through her personal belongings. The episode then continues with the domestic worker finding out about the incident. Seeking revenge, she casts a spell on all the family members and makes them her own servants. The final scene of the episode shows the domestic worker treated as royalty. The Saudi housewife gives her manicure, the kids serenade her with their singing and the husband serves her drinks.

This conclusion might strike an outsider as absurd but the episode strikes a chord with the Saudi audience. It feeds the popular illusion that domestic workers control their employer’s social lives. According to this belief, it is the domestic workers that have the power over the Saudi family in the worker-employer relationship, not the other way around. There is little on television or any other medium of entertainment on how the Kafala system strips workers of their basic rights and provides sponsors with an incredible amount of power over noncitizens. More importantly, while presenting the storyline in a comedic fashion, Tash ma Tash (and other Saudi comedies) normalises stereotypes about domestic workers as sorcerers.

Professor Antoinette Vlieger, who conducted fieldwork in Saudi Arabia on domestic workers, noted that the Saudi justice system does not have any evidentiary rules concerning the accusation of sorcery. If citizens suspect their domestic workers of practising sorcery, they can report the worker to the authorities without needing to provide evidence. The authorities, then, can arrest them, put them on trial or deport them. This gives employers extensive power over the lives and behaviour of their domestic workers and allows for abuse and mistreatment. As one diplomat informed Vlieger, “[employers] just accuse them because they don’t want to pay the salary or because of jealousy or something like that. By accusing them of occultism, they can refuse to pay, they can deny accusations, they can send them away. When they torture the maid, they accuse her of magic to legalise the torture so they get no prosecution.”