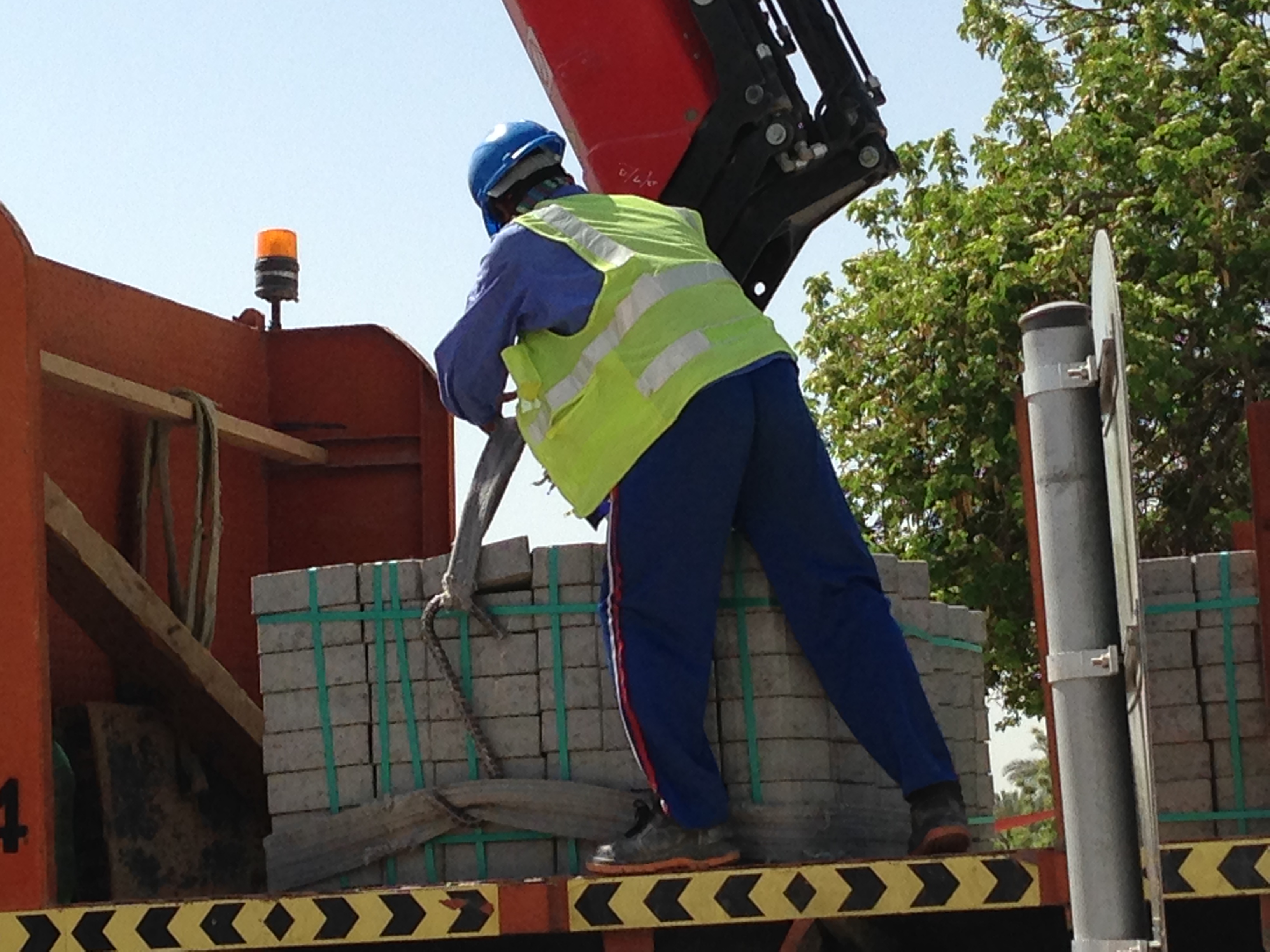 Construction workers comprise a significant percentage of the Gulf’s migrant workforce. Though the brunt of international criticism has focused on Qatar in recent years,  construction workers Gulf-wide are vulnerable to the exploitation.  In a mercurial sector, where project costs are easily impacted by economic fluctuations, workers’ salaries and well-being are often the first casualties of a struggling project.

The vagaries of the sector are in part due to poor project planning and in part to the indifference of regimes that dehumanise migrant workers from the very start of the migration process.

Below is an overview of the issues most prevalent in the sector, which are exacerbated by the region’s migration system. Many of these scenarios feature in our new interactive infographic on the Kafala system.

It’s no secret that migrant workers pay huge recruitment fees, even though throughout GCC laws clearly state that employers must pay all fees. But this regulation is neither monitored strictly nor penalised when exposed. Only a handful of companies in the region have actively investigated illegal recruitment fees,  and even fewer actually recoup fees from agents/sub-contractors and pay back workers.

David Segall, a policy associate with New York University’s Stern Center for Business and Human Rights, has studied this extensively.

In a talk earlier this year at the Center for International and Regional Studies, Georgetown University in Qatar, Segall said, “The point is that recruitment is not free; it costs money to find workers, to skills-test them, to process visas, to interview them, and to make sure they’re qualified for the job that you’re hiring them for.”

He says clients throughout the supply chain do not pay their suppliers for services rendered.

“Every single player in the chain seems to have leverage over their supplier, and that leads to downward pressure on wages and upward pressure on costs of migration” ultimately borne by migrants, Segall noted in his talk.

What Segall called an “inverted payment chain” has clients (such as government, a government-sponsored development project, or a private company) at the top of the supply chain and low-wage workers at the bottom. In between, there are layers of employers/sponsors, registered recruiters in South Asian sending-countries, and unregistered local “sub-agents.” According to Segall, “Clients are not actually paying their suppliers for the services that are rendered . . . or they are getting paid. So it flips the entire chain, such that at the end of the line it is the migrant worker who essentially foots the bill for all of the costs of migration, plus some.”

Given that many workers arrive in the GCC already heavily indebted, they are forced to continuing working in exploitative or dangerous environments, simply to pay back those debts.

The recent fiasco in Saudi Arabia, where workers in major firms have been forced to go back without being paid months of salary, while those who protested faced arrest.

In Kuwait, construction workers number 186,000 or 17% of the migrant workforce.

Over 600,000 workers from Nepal, India and Bangladesh work in the construction sector in Qatar, mainly on mega-construction projects related to the 2022 World Cup.

*Numbers were compiled taking into consideration nationality-wise population breakdown where available, sectors those nationalities are employed in and other media reporting.

Tens of thousands of men, from South-Asia, Africa, and Arab countries find themselves without jobs, compensation, documents, or even water, electricity, and food when their projects unexpectedly stop. Migrant-Rights.org reported extensively on Saudi’s ongoing issue with stranded workers in 2016. But workers stranded in the Gulf is not a new phenomenon – rather, it’s part and parcel of the migration process itself. Thousands were stranded in Dubai following the economic crisis in 2010. This past year, Gulf countries announced austerity measures, citing falling oil prices. Construction projects have been cancelled or delayed, though mega-projects are ongoing and new ones are planned. In Kuwait, a US$4 billion project for a “smart city” was announced and Saudi is still seeking to award over $250 billion in contracts for projects.

Countries invest little effort to ensure workers are paid their due wages before they make their final exit home. Saudi made some half-hearted commitments at the height of its problem last year, but many workers remain stranded and unpaid nearly a year later. Rather than ensuring workers were compensated for their salaries and their lost time, Saudi developed a creative solution in March of 2017 with the announcement of a conveniently timed 90-day amnesty to allow undocumented workers to leave the country without penalty.  The promise of a penalty-free and immediate exit is enticing to desperate workers who face an otherwise indefinite and uncertain battle, even if it means they leave without their due wages.

Qatar has taken centre stage in the scrutiny on migrant worker rights involved in construction projects for the 2022 World Cup tournament.Reports estimate at least 1000 deaths related to working conditions occur every year, though both Qatari authorities and those of origin countries often obscure the cause of death. “Cardiac arrest” or “exhaustion” are dismissed as natural causes of death, although they directly result from exploitative living and working conditions.

Building collapses and fires in Kuwait number over 50 accidents a year, in the private and public sector. About 83% of victims of construction accidents sustain permanent disabilities according to a 2010 study. One recent report published in March 2016 declared construction the most dangerous sector in Kuwait, with  “deaths among construction workers compris[ing]nearly half of all worker injuries in Kuwait.” The report cites the causes of these injuries and deaths as “archaic methods of construction still in use, including wooden scaffolding, unsafe use of equipment, lack of hard hats or safety precautions”

The report notes that some workers do not want to use heavy hats because they are uncomfortable in Kuwait’s unbearable heat. Other workers reported they are not provided with any training, uniforms, or protective equipment. One engineer said some developers and employers are able to obtain building permits without a check on their safety rules.

In Kuwait, the municipality usually runs two types of inspections, seasonal and unplanned. Seasonal visits determine if workers have valid insurance for work injuries and whether the employer has receipts that prove wages have been paid. The receipts must be stamped by the municipality and kept on file for inspectors. Unplanned visits check for working hours, unlisted workers, and safety. Yet, the regulations themselves require improvement and do not align with international standards. Some high-risk traditional construction methods are commonly used in smaller projects to avoid paying for heavy equipment and remain legal.  In 2015, 1,238 of the 4,328 violations reported were related to lack of safety measures.

When inspectors find a construction project that is inactive, they allow the employer a period of time to activate the project before they lose the permit and pay a financial guarantee to the workers. If inspectors discover that project does not exist, the employer’s permit is revoked and a case is filed against them. But the employer remains free while he waits for his court case to be processed, while an arrest warrant is issued against workers recruited under the project.

...it flips the entire chain, such that at the end of the line it is the migrant worker who essentially foots the bill for all of the costs of migration, plus some. – Segall

Although deaths are common in the construction sector, there’s little clarity on the compensation procedures. One Indian sub contractor told Migrant-Rights.org that the process is very slow and demanding. The family of the deceased must nominate a power of attorney to follow up on the cases through the embassy. The paperwork in countries of origin is not easy to navigate either. For instance, in India kin must also present a legal certificate of inheritance, as well as obtain supporting documentations from at least four state agencies.

When deaths are not considered the direct cause of a workplace incident, as with a majority of Nepalese worker deaths in the GCC, companies are not held liable. Governments shrug off their commitment to health and safety, claiming them as ‘natural deaths’.

However, unhealthy working and living environments quite clearly contribute to ‘cardiac arrests’ of hitherto healthy youngsters in their 20s and 30s.

The Business and Human Rights Resource Centre (BHRRC) released Wall of Silence in December 2016, a report detailing how the construction industry fails to tackle the abuse of migrant workers.

Only 22 of the 100 construction companies operating in Qatar and the UAE that BHRRC contacted to survey the measures taken to stop the exploitation of migrant workers, responded, ‘indicating a shocking level of inaction’. The report adds that only 39% of the companies contacted had publically available human rights commitments.