According to a new report released by Uganda’s parliamentary committee on Labour and Gender, about 50 Ugandans, of whom 32 were women, have died in the United Arab Emirates since January this year.

35 of these deaths have been ruled suicides.  Other causes of death include cardiac arrest, murder, drowning, meningitis, HIV-related complications, and liver failure.

David Abala, the Ngora County Member of Parliament who heads the committee, said he was shocked by the findings of their field visit to the Emirate in September.

Most of the suicides were a result of frustrations due to dreadful working conditions including unpaid wages, rape, and torture, he said.

Migrant-Rights.org has previously reported on the impact of the restrictive kafala system and exploitative labour conditions on the mental health of migrant workers in the Gulf states, and the consequent prevalence of suicide. 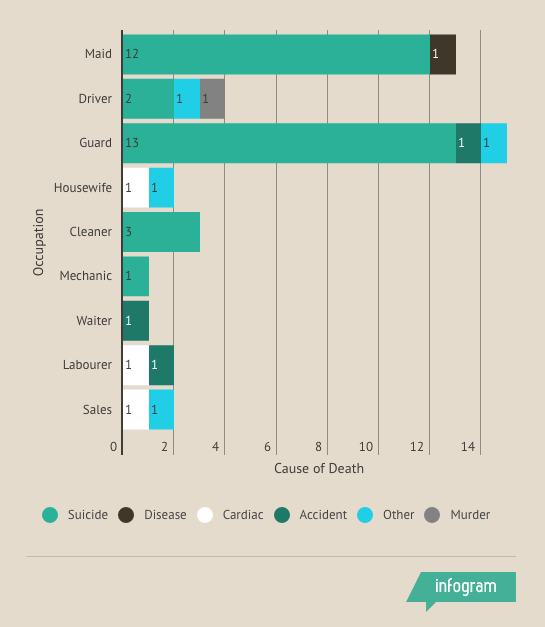 Data collected by the Ugandan government on the death of workers in the UAE this year. Two Ugandan domestic workers also committed suicide in Oman.

According to the MP, most of the deceased did not have travel documents as they had been confiscated by either their employers or recruitment firms.

Dr. Sam Omara a counsellor at the Ugandan Embassy in Abu Dhabi told a local UAE daily that the embassy was trying to provide counselling to those in distress.

"I urge all Ugandans to come forward to the embassy or call us if you have any problems at work or other issues, so we can help," said Dr Omara. "If you have social, financial or work-related problems, it's good that you share it with a friend or speak to a relative. Don't just keep it to yourself as it may lead to depression."

The report has refocused fresh attention to the plight of migrant workers in the United Arab Emirates, where the commodification of workers and the disdain for certain nationalities is common.

The Ugandan Ministry of Labour, Gender and Social Works recently signed a bilateral agreement with Saudi Arabia and Jordan to improve the recruitment and working conditions of Ugandan workers.

You Took My Life First: the Stigma of Mental Illness Against Migrants in the Gulf