Technical Cooperation between ILO and Qatar on Workers rights

Threat of Commission of Inquiry eases

Qatar and the International Labour Organisation (ILO) are set to enter into a three-year programme of Technical Cooperation to carry out extensive labour reforms.

The details of the cooperation were published on October 26, 2017, the day the ILO Governing Body commenced its 331st session. On November 8, a plenary session will follow up on complaints concerning Qatar’s non-observance of the Forced Labour Convention and the Labour Inspection Convention, and determine if a Commision of Inquiry will be launched.

An excerpt from the report published by the ILO outlines terms of the cooperation:

The programme will support the implementation of numerous measures to address passport confiscation, contract substitution, as well as restrictions on migrant workers’ ability to change employer and exit the country.

The ILO technical cooperation programme will report annually to the Governing Body at its November session.

Points 2 and  3 are particularly significant;  a minimum wage for all workers without ‘any distinction’, and giving workers the agency to renew their own residence permits will ensure that they are not forced into irregular status, and then victimised for it.

If implemented effectively, this may set an example for reforming other Kafala regimes in the region.

The ITUC perhaps has been the loudest and strongest critic of Qatar over the years.

So it’s a big win for the country that the ITUC was the first to break the news on this co-operation. ITUC General Secretary Sharan Burrow, a longstanding critic of the country, said in a statement, “The new guidance from Qatar signals the start of real reforms in Qatar which will bring to an end the use of modern slavery and puts the country on the pathway to meeting its international legal obligations on workers’ rights. Following discussions in Doha, there is a clear government commitment to normalise industrial protections for migrant workers.”

The statement does not mention or reiterate the ITUC’s earlier demand for freedom of association.

As recently as in March, Burrow wrote: “…in the years that I’ve been visiting the camps, nothing has changed. Hundreds of these workers succumb every year to the appalling living and working conditions, returning to their home countries in coffins, their deaths callously written off as the price of progress.”

In 2013, the ITUC had said, “more than 4,000 workers risk losing their life over the next seven years as construction for World Cup facilities gets under way if no action is taken to give migrant workers’ rights.” An erroneous figure that international media ran with.

In an interview with Doha News in April 2016, Burrow said that even if she got that figure “wrong by a few hundred middle-class Indians…nobody can deny there is no commitment from the Qatari government to treat workers here as human beings with fundamental human rights.”

However, not everyone is convinced that this is the final breakthrough.

Amnesty International said it was ‘cautiously welcoming’ the agreement, in a statement released yesterday.

“This agreement is a welcome step that offers a prospect of hope for migrant workers in Qatar. There are some positive commitments – in particular relating to unpaid wages,” James Lynch, Deputy Director of the Global Issues Programme at Amnesty International said in.

“However, the question of whether this is a true game changer will be answered by the actions of the government in the coming period. Will it, for example, categorically clarify whether it intends to change the law to allow all migrant workers, without exception, to leave the country without their employers’ say-so? This is something that on our reading they would have to do in order to fulfil this agreement.”

Interestingly, there is no mention of freedom of association, which has been stressed in previous reports by trade unions working with the ILO.

The Qatar government has submitted to the ILO details of:

Migrant-Rights.org earlier published an analysis of the Domestic Workers Law based on the information made available by local media.

Of particular note is the provision in the Law that sets down a maximum 10-hour work day.  Working days must include break periods for worship, rest and food, but these periods will not count towards the calculation of working hours. 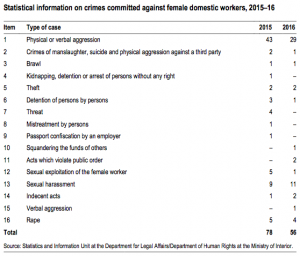 The law also states that one can employ a domestic worker directly from abroad (without using a recruitment agent) after acquiring necessary approvals.

Two recently signed Memorandums of Understanding (MoUs) indicate that current moratoriums in place in some countries of origin may no longer apply to Qatar:

The Regional Office of the Asia Pacific Forum (APF) was also recently inaugurated at the site of The National Committee for Human Rights in Doha.One of the objectives of this partnership is to ensure joint cooperation with respect to protecting and strengthening the rights of migrant workers, including female domestic workers in Qatar.

Qatar says that it has “removed the constraints previously imposed on some migrant workers in changing employers. These involved workers who were granted work permits for specific projects. Now, the Government has not imposed any conditions on transferring to another employer and the worker can move to another employer if the provisions of the Labour Code concerning the notification procedure are respected.” 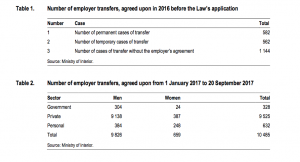 The report also claims that of the 2,958 grievances received regarding exit permits, only two were rejected. This is a correction of earlier figures (Over 761 were received between December 13, 2016, and February 15, 2017; 213 of which were rejected, 485 approved, and the remaining in consideration at the time.)

This is not the first time that Qatar has made headline-grabbing announcements promising extensive labour reform but fallen short on delivery.

In May 2014, Qatar announced plans to end the  Kafala system, and but the reforms came into effect only in December 2015, and did not meet the promises made at the start.

But the Technical Cooperation is a promising move and one that might result in the abolition of the worst provisions of the Kafala. Migrant-Rights.org welcomes this move.