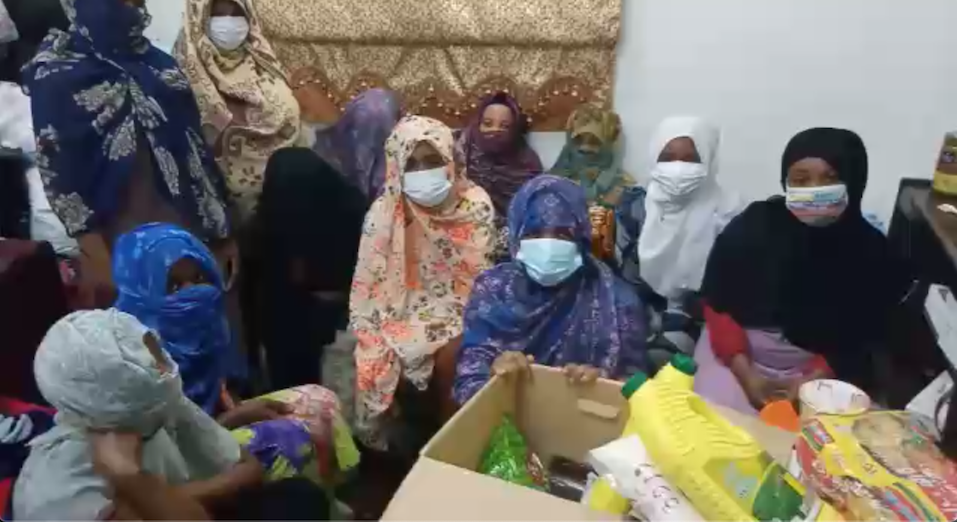 Over a hundred women from Sierra Leone are stranded in Oman, struggling to find safe shelter and return home. Most worked as domestic workers and experienced deceptive recruitment, forced labour, and other forms of trafficking. Some are desperate to leave employers who have mistreated them, while others who have already done so are crammed into ramshackle apartments, with the constant threat of eviction looming over them. A group of roughly 20 have been living on the streets opposite the Ministry of Manpower for several weeks, hoping, without much success so far, to capture the attention of authorities. With no Sierra Leonean embassy in the country – and few other compatriots with privilege or access in Oman – the women have no reliable support system to get food and safe shelter, let alone a ticket home.

Oman is waiving all fees and fines for migrant workers who leave the country by 31 December 2020, including for workers with absconding charges, but the application process requires a travel document. In the case of this group, most of their employers have confiscated their passports, though this is illegal under Omani law. Without passports and no embassy to quickly process emergency travel documents for them, they are currently unable to make use of the amnesty. All requisite documents will need to be provided by embassies in neighbouring countries such as Saudi Arabia or the UAE, which is often a drawn-out undertaking.

“I have every right to file a complaint against my agent that brought me, who trafficked me from my own country and brought me to this place, to this evil, deadly place. This is hell."

The women we spoke to shared common stories of deception and exploitation, most having no idea they would be working as domestic workers in private homes. Amie*, who arrived in January 2020,  says she was told by a recruiter that she would be working in a hotel for six months, and would be able to return to Sierra Leone to resume her studies. But once she landed at the airport, her employer told her she would be working in their home and that she could not refuse any work they gave her. She was not paid for the six months she worked with her employer and once she requested her salary, her employer confiscated her documents and threw her out of the house.

“Life has become so miserable for us. We slept on the streets. We worked without a salary. If you talk, decide to ask for your salary, they beat you, put you in the streets. We can’t fight them back, we have no rights here, no embassy… even if they killed you, there’s no one who will stand for your rights, so we decided to keep quiet.”

Aminata* tells a similar story. A recruiter told her and others that they would be working in hospitality –- in salons, restaurants, and hotels. Other women were also promised jobs that would make use of their skillset, presenting the opportunity to work abroad as an investment in their careers. Once they arrived at the airport, she says their documents were confiscated and they were sent home with employers who expected them to work round-the-clock and refused to pay them. “When you ask for your salary, they will beat you,” she says.

Most of the women came to Oman between mid-2019 and early 2020, some just before the borders were closed due to the pandemic. None whom we spoke to went through official channels; some drove through Guinea, and from there took a flight to Senegal before connecting to Oman. They did not pay any recruitment fees, but some were told their first month’s salary would go towards recuperating their visa and ticket costs. Others were surprised to find that the first several months of their salary were paid directly to the recruiter.

The recruiters appear to be unregistered agents who operate throughout the region. Aminata says she was a jobless graduate when she contacted her agent through a friend. The man was part of a husband-wife duo, with his wife currently based in Kuwait. Once she was in Oman and it became clear that she had been lied to, her family tried to contact the agent with no success. They filed a police complaint, but he has still not been tracked down.

Amie says she was also brought to Oman by a different husband and wife team, who she is committed to bringing to justice.  “I have every right to file a complaint against my agent that brought me, who trafficked me from my own country and brought me to this place, to this evil, deadly place. This is hell. My sponsor treated me poorly, but this is all the fault of my agent. He lied to me. He lied to me about my work. He lied to me about my salary. As soon as I’m back in my country, I’ll make sure they return our money to us.”

The women say they had not signed contracts in Sierra Leone, and several say they did not even know they were coming to Oman. The Oman-UAE corridor has long been a hotspot for trafficking of domestic workers who arrive in the UAE and are taken through the Oman border.  Some of the women we spoke to only had visit visas from the UAE, and no Omani work permits, further complicating their exit.

Abuse at every level

Aside from recruitment deception, the most common complaints involved unpaid wages, overwork, sexual harassment, and lack of medical care.

Binta* said she was working constantly and was only fed leftovers. “I was taking care of goats, cows, gardens, doing everything.”  When she complained, she recounts, they took her to her agency office, where they beat her and locked her inside a bathroom for a week. She was then returned to her employer’s house, where she continued working without a salary.

“The sexual harassment every day. The abuse. Shouting at me. Every day I’m crying, they don’t even care. It’s like I’m nobody to them. I’m not a human being when I talk. ”

Aminata was so overworked that she developed a severe medical issue and began coughing up blood. A previously healthy young woman, she says the constant exposure to cold water from cleaning made her ill. Her employer refused to take her to the hospital, and once she left the household, she was unable to receive treatment in a hospital due to her now undocumented status.

“When you ask for your salary, they will beat you,”

Halima*  says neither the salary nor work was what she expected. Her boss beat her and made sexual advances. She says she was “rescued by her sister” at just the right time.

In Oman, almost no recourse for domestic workers exists, and those far outside the capital city Muscat are even more hard-pressed to find support. There are no formal shelters for domestic workers and no clear way for them to seek help. Like most Gulf states, Oman does not treat forced labour as a trafficking crime. The 2020 Trafficking in Persons report specifically notes that cases of domestic servitude are often pursued labour violations. Consequently, the services that purportedly exist for victims of trafficking – including shelter, complimentary repatriation, and pro-bono assistance in court proceedings – are not accessible to these women.

Officials MR reached out to suggested that the women go to the police. But most women – particularly those who have already left their employers homes – fear arrest and are too traumatised to recount their stories to an office of mostly men who speak another language. Those who overcome these barriers do not report a good experience.

“When I went to the police, the police said that there’s corona and threw me out. I had nowhere to go. I don’t know if a Sierra Leone community is here because we don’t have any chance to go out. We don’t have freedom of movement, freedom of speech in the house. Now no house and no food. We just want to go back to our country.”

Trafficking of domestic workers from Sierra Leone is not limited to Oman alone. Over 100 women in Lebanon recounted similar experiences this year and were finally repatriated in November, following months of campaigning and fundraising.  Kuwait and Libya are also common destinations. The country’s anti-trafficking initiatives remain weak, and it is currently on the US State Department’s Tier-2 list.

The Covid-19 pandemic has exacerbated difficulties of domestic workers in Oman, which, despite weak legal protections for migrant workers, receives relatively less scrutiny than other Gulf states. Oman’s labour law does not cover domestic workers, and it is the only country in the Gulf that has neither a domestic workers law nor inclusion in provisions of labour law, leaving its 154,000 domestic workers with no protection outside of immigration regulations. The country also lacks effective mechanisms to prevent and report violations.

Oman does have strong migrant community associations that support migrant workers in distress, but none that focus on African workers. The women rely only on each other and a small network of other migrant workers from Sierra Leone to coordinate repatriation support from embassies in neighbouring countries. But embassies in the UAE, Saudi, and Kuwait appear both under-resourced and slow to act, leaving a still uncertain future for these women.

Despite the ongoing issues facing domestic workers in Oman, the country recently resumed issuance of new ‘housemaid’ visas. It is critical that Oman exercises diligence in new recruitment, and addresses the needs of those currently in the country. Steps Oman should take include: