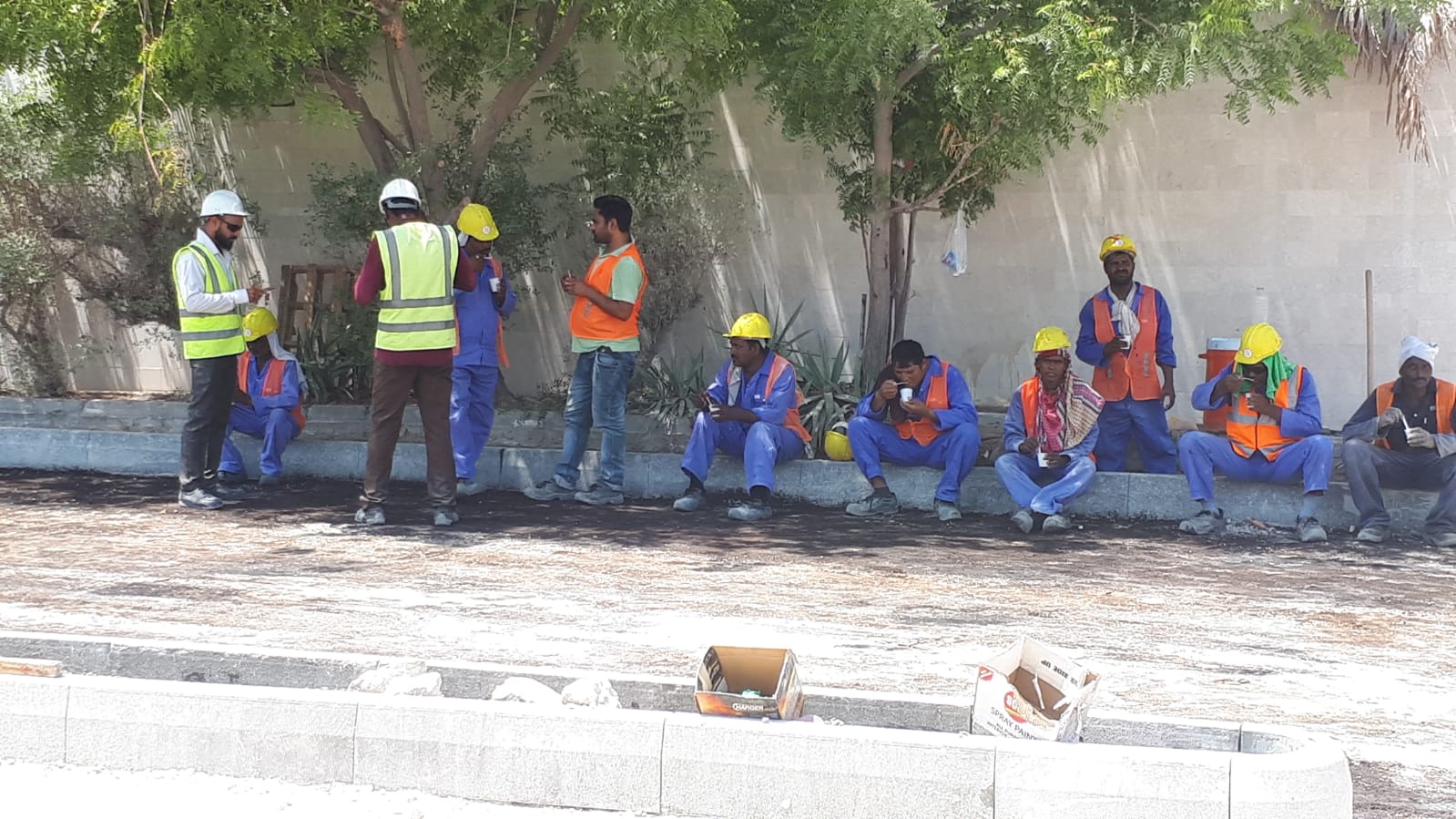 Though summer midday work bans have officially ended across the GCC, workers labouring outdoors continue to be exposed to high-stress temperatures and humidity.

Each of the Gulf states implements its own version of a summer midway work ban, whereby outdoor work is prohibited during certain hours of the day (see table below).  The bans are determined by fixed dates and times, rather than actual weather conditions.

According to the International Labour Organisation (ILO): “Heat stress refers to heat in excess of what the body can tolerate without suffering physiological impairment. It generally occurs at temperatures above 35°C, in high humidity. Excess heat during work is an occupational health risk; it restricts workers’ physical functions and capabilities, work capacity and thus, productivity. In extreme cases it can lead to heatstroke, which can be fatal.”

Temperatures in the Gulf countries remain well above 35°C outside the summer work ban periods. Bahrain for example, where the midday work ban runs only from July to August, recorded its hottest June in more than a century with temperatures exceeding 40°C for 20 days, and the hottest day reaching 45.3°C. Kuwait, where the ban runs from June to August, regularly sees temperatures above 35°C in May and September.

In Bahrain, activists and MPs have called to extend the summer outdoor work ban by a month, but the government is reluctant to do so, reportedly due to “implications for the private sector”. Bahrain has the shortest midday work ban in the region, spanning only two months, while most GCC states run for two and one half to three months.

A recent ILO report on the impact of heat stress on workers notes that:  “Above a certain threshold of heat stress, the body’s internal regulation mechanisms are no longer capable of maintaining body temperature at a level required for normal functioning... If the body temperature rises above 38°C (“heat exhaustion”), physical and cognitive functions are impaired; if it rises above 40.6°C (“heatstroke”), the risk of organ damage, loss of consciousness and, ultimately, death increases sharply” 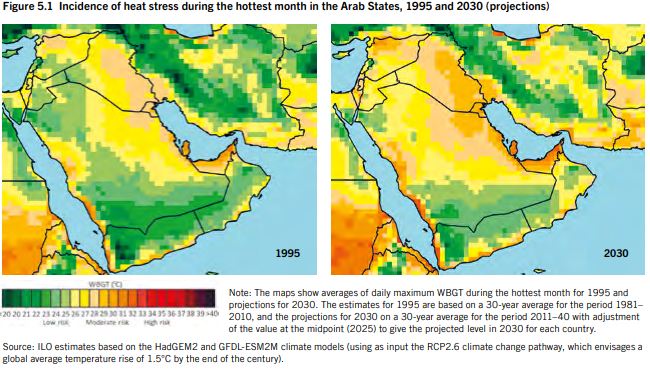 Global warming is expected to exacerbate heat stress levels even further. According to a report by Germany’s Max Planck Institute, temperatures in the MENA region could increase by 4°C by 2050. The report notes that "The people in the Middle East and North Africa will then have to expect about 200 unusually hot days per year toward the end of the 21st century”.

Research by scientists from the Massachusetts Institute of Technology (MIT) predicts that conditions in the Gulf region, including low elevations, very high humidity and temperature and intense sun, will make the region “a specific regional hotspot where climate change, in the absence of significant mitigation, is likely to severely impact human habitability in the future.”

The ILO notes that increases in heat stress resulting from global warming are projected to lead to global productivity losses equivalent to 80 million full-time jobs in the year 2030.  In the Arab states, the construction sector will be hit most, with heat stress in this sector expected to account for 40% of the total loss of working hours in 2030. In the Gulf states, where the construction sector accounts for 23% of employment, “…high temperatures and humidity, alongside outdoor work, can exacerbate heat-related risks for these workers”.

Migrant workers, who account for 95% of the construction sector, will be most affected.

These are conservative figures: the report assumes agriculture and construction work is conducted in the shade, and that the global mean temperature will not exceed 1.5°C.

“Sometimes, however, temperatures are still extremely high outside of the banned hours, and limited labour inspection undermines the policy’s effectiveness. Moreover, since climate change is expected to increase the frequency and intensity of heat waves, fixed restrictions on working hours may not be enough to protect workers from heat stress in these countries. Consequently, the current ban on outdoor midday work in the GCC countries could be adjusted to reflect real-time temperature”

The data above reflect local media reporting, and likely underestimate the true scale of violations in the region. Limited labour inspections mean many violations are not recorded; Bahrain, for example, has only 12 inspectors (six for the service sector and six for the industrial sector), for the nearly 80 thousand firms.

The GCC governments must do more to protect migrants working under increasingly dangerous temperatures. Temperature and pollution levels must be constantly monitored to ensure workers are protected from health and heat risks. Summer work bans cannot be based on arbitrary calendar dates, but must be based on real working temperatures. The GCC governments must ensure workers have access to appropriate dress codes, occupational safety and health measures and have control over their workplace, which can help workers in adapting to heat stress.  Increased inspection capacity is needed to properly enforce these regulations.

A death a day: Nepali workers in Saudi

View all Health and Safety