Workers employed on a World Cup project in Qatar have not been paid for months, according to a recent report by Amnesty International. Salary delays began in early 2019, with many receiving no salary at all between September 2019 and March 2020. Around 100 workers primarily from Nepal, Philippines, Kenya and Ghana have been affected.

Some excerpts from the report:

Migrant workers employed on a construction project for a FIFA World Cup stadium in Qatar worked for up to seven months without pay, Amnesty International has revealed. Around 100 employees of Qatar Meta Coats (QMC), a design and construction company subcontracted for façade works on the €770m Al Bayt Stadium, are still waiting to be paid their full dues.

“Migrant workers told us about the hardship they endured having worked without pay on Al Bayt Stadium for months on end. They are worried about their families, who rely on the money they send home from Qatar to pay school fees and medical bills,” said Steve Cockburn, Head of Economic and Social Justice at Amnesty International.

“Although recent payments will provide some welcome relief for workers, Qatar’s World Cup organizers told us they had known about the salary delays since July 2019. This raises the question of why Qatar allowed workers to continue working for months without pay. It shouldn’t take an Amnesty investigation for workers to be paid what they are owed.”

In January 2020, fed up with the company’s repeated promises, some workers submitted complaints to Qatar’s Labour tribunals. During mediation sessions QMC representatives agreed to settle some claims but didn’t follow through. Other employees were told by the company they would be paid only if they agreed to end their contracts early and go home.

Several employees said they were stopped from coming to work, apparently in retaliation for going to the courts or for refusing to end their contracts early.

One worker, Kiran*, said: “The company has so much advantage over workers that you regret going to the court. Whatever the company decides, Qatar favours them. Workers are suffering because the companies rule.”

By the end of February, QMC had removed all remaining employees off the Al Bayt Stadium and asked them to report to its factory, which manufactures and finishes materials including aluminium and steel, apparently for use in the stadium. The employees continued to work at the factory without pay until 22 March, when the factory closed due to coronavirus. 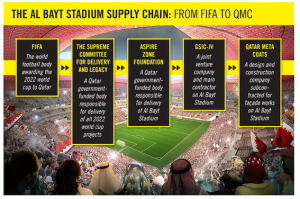 Responding to the allegations, the company acknowledged the delays. The Supreme Committee, the government entity responsible for organising the World Cup, also said it had been aware of the problem since July 2019.

Following the exchange between Amnesty International and the Supreme Committee, workers received a part of the wages owed, but no one has received all the dues.

FIFA responding to Amnesty said they had been made aware of the case and were working with Qatar on ensuring this is resolved. “However, it remains unclear why FIFA was unaware of the Al Bayt Stadium situation until May. Amnesty believes that FIFA’s apparent lack of awareness of the plight of workers at one of its World Cup stadiums shows the footballing body is still failing to take human rights abuses linked to the 2022 World Cup seriously,” Amnesty said in a press release.

The full report can be read here.