In March 2017, Saudi residents received texts on their phones from the General Directorate of Passports division of the Saudi Ministry of Interior announcing the launch of the “A Nation Without Illegal Expatriates” campaign, which vowed to rid the country of immigrants who have overstayed their visas, have escaped from their jobs, or performed Hajj without the correct permissions. 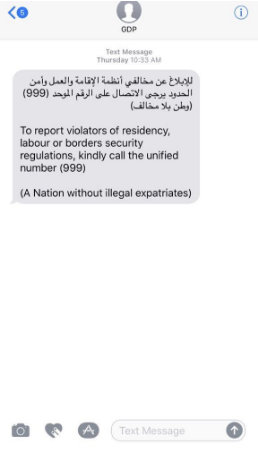 With the Saudi economy facing decline since the fall of oil prices in mid-2014, and the advent of high social media use in the kingdom, xenophobic and racist discourse has been on an all time high. However, this racism has a long history that continues to manifest today due to two factors that reinforce each other: state policy and racism at the societal level.

Although slavery was officially abolished in Saudi Arabia in 1962, it has taken a new and modern form in the kafala system. The kafala system is a sponsorship system in which a migrant employee’s visa status is tied to their employer, meaning that they cannot enter Saudi Arabia, leave Saudi Arabia, or change employers without the permission of their sponsor (kafeel), essentially restricting their right to movement. In Antoinette Vlieger’s Domestic Workers in Saudi Arabia and the Emirates: A Socio-legal Study on Conflicts (2011), Vlieger describes how domestic workers in Saudi Arabia are not the official property of their employers, which means that they do not fit the United Nation’s definitions of “slave.” However, she argues that this definition needs to be reviewed: before the concept of private property, ownership was not always the mark of slavery. Rather, it was the extreme control of one person over another.

The extreme control and institutional racism that the kafala system provides by delegating power (and thus responsibility) over the worker to the employer, reveals itself at its most brutal in the domestic work sector, and primarily with workers from East Africa and South/Southeast Asia. Employers’ complete control over workers is sanctioned by the state, which intervenes when in the form of deportation and other punitive measures but rarely in the form of protection. While a domestic labour law does exist specifying a few meagre stipulations such as a weekly day off and annual leave for 30 days every two years, there are grave problems in compliance, enforcement, and penalties. Domestic workers live with their employers and are rarely capable of interacting outside of the private sphere, and unionising for all foreign workers is prohibited, thereby creating an environment where abuse can easily go unaccounted for.

In a 2015 BBC mini-documentary on Kenyan domestic workers in Saudi Arabia, one domestic worker deported from Saudi Arabia said, “I went there and find that the salary was reduced, the place where I was sleeping was a small mattress. I may not sleep, or if I sleep I sleep for two hours. You're not eating. If you're given food, you're given leftovers. It was so painful, I cried every time and asked 'why did I come to this place?” The documentary also features Kenyan domestic workers who were beaten, tortured and sexually assaulted by their employers.

Before the concept of private property, ownership was not always the mark of slavery. Rather, it was the extreme control of one person over another.

The workers’ experience highlights the perversity in the relationship between employers and domestic workers. Saudi embassy officials in Nairobi told BBC that the complaints made by these women were isolated incidents and not representative of the attitudes towards foreign workers. However, the numerous and consistent reports of domestic worker abuses, who are also sometimes below the age of 18, in the past decade prove that these cases are far from isolated incidents.

It is not exclusively class or citizenship that determines the power relations between employers and migrant employees – race is equally a factor. There is no recent history of Saudis providing domestic help to non-kin Saudis – it was always foreign labour. Recruiting migrant domestic workers became commonplace since the 1973 oil boom when wages rose and allowed many Saudis to afford domestic help. With bountiful state resources, there was no urgent need for most Saudi women to work, rendering them the primary managers of domestic workers -  and thus, the primary source of abuse towards domestic workers, a role at odds with the one-dimensional oppressed characters often depicted by international media and organisations. 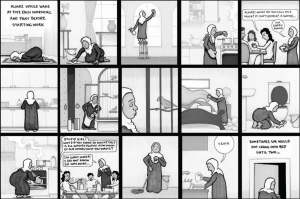 A strip from a graphic illustrating the experience of Almaz, an Ethiopian worker in Saudi Arabia

The majority of the low-income workers governed by the system are recruited from specific Asian and African countries where contract labour is cheap and workers needing to support their families are willing to endure poor working conditions. The dehumanisation of African and Asian workers leads to countless stories of physical abuse, verbal abuse, sexual abuse, and financial exploitation and is justified by prevalent beliefs that certain ethnicities’ lives are worth less, or that they have certain negative characteristics that call for their exploitation. These stereotypes are ever-evident in the discourse on the Saudisation of service jobs currently occupied by migrant workers.  In a recent Saudi Gazette article arguing for the Saudisation of Uber and Careem, journalist Maysoon Abu Bakr claimed that migrant drivers do not keep their cars clean, and are prone to take advantage of women by hiking up the price, placing these kinds of offences solely in the domain of foreign men.

Sexual demonisation and victim-blaming can also extend to domestic workers who are overwhelmingly women and have no protection from sexual abuse in the privacy of the home. In a recent case, Saudi Twitter created the hashtag #AlTurkiParole in Homaidan Al-Turkis’ defence after he faced criminal charges for raping his Indonesian housekeeper in the United States. The tweets range from calling for him to be reunited with his children to claims he has served for 11 years due to false accusations and tampered evidence.

In another case from 2015, a Saudi woman released a video of her husband sexually assaulting a domestic worker, and it went viral along with the hashtag #سعوديه_تفضح_زوجها_الخاين which translates to “Saudi woman exposes her cheating husband.” Many responded in support of the Saudi woman with no regards to the domestic worker who can clearly be seen to be resisting. News outlets such as Gulf News reported this as a case of infidelity. A pattern of victim blaming emerges and the implication is that domestic workers are home wreckers that Saudi wives should fear. These beliefs are perpetuated both by society and institutions that fail to protect victims (for example, by jailing pregnant workers), and feed suspicions that justify the mistreatment of workers.

Non-Muslim migrant workers also face persecution for practising their religion despite the Kingdom pledging in 2006 to not interfere in the private practice of other religions and to crack down on transgressions by the religious police into private religious ceremonies in private homes. However, in December 2012, thirty-five Ethiopian Christians were arrested as religious police raided a private religious ceremony in one of their homes on Christmas.  The"disbelievers," as they were referred to by authorities and in media, endured inhumane bodily searches and unsanitary detention conditions before being deported on the charge of “illicit mingling” of unmarried persons.

On April 4th 2017, a Saudi woman shared Snapchat videos of herself interrogating domestic workers about their religious beliefs and going through their personal belongings. She can be seen physically and verbally abusing them in these videos that went viral and which The Tempest reported on extensively. The fact that such videos can go viral and employers face no repercussions is only a confirmation of what many human rights organisations have claimed, there are few laws in place and even fewer enforced to protect documented or undocumented poor migrant workers.

Racism runs amok among Saudis themselves as well, with black Saudis often being the target. In an interview with the New Arab on her viral YouTube video “Yes She’s Black, but She’s Pretty,” black Saudi beauty blogger Abeer Sinder describes how she received countless backhanded compliments about how she was beautiful despite being black, pointing out that in the Saudi imagination, being beautiful was the exception to being black. She told the New Arab, “Growing up I always felt that my dark skin is beautiful and that I was pretty … but that changed when I went out into society; I started to hear so many hateful, racist comments that made me hate myself for a while... I even considered skin bleaching."

Ironically, discourse within social justice and feminist movements in Saudi Arabia rarely show solidarity with migrant workers. Social justice advocates should acknowledge how race, nationality, class, gender, religion and so on intersect and compound a migrant’s experiences, including income and working conditions. While it is ridiculous that women are still not allowed to drive in Saudi Arabia, one of the most frequently featured argument for the right of women to drive is rooted in the sexual demonization of migrant men, and the dangers that Saudi women may face when they are being driven by their hired drivers who usually come from South Asian countries. A tweet by journalist Dr. Hoda Jannat (who writes for The Guardian) recently showed a video of a Pakistani driver trying to harass a Saudi woman, with the caption “Saudi girl videotapes a Pakistani resident employed as a driver harassing her. Isn’t it better to grant the Saudi woman the most basic right on earth...the right to drive a car?” The rights of Saudi women should not be predicated on the fear of migrant workers.   It’s important to also remember that both migrant women and Saudi-born non-citizen women (Mawaleed) in Saudi Arabia are forbidden from being able to drive,  but mainstream feminist discourse consistently excludes them from the movement.

The campaign to crack down on undocumented workers is yet another manifestation of Saudi Arabia’s institutionally racist and classist kafala system – the system limits many poor migrant workers’ choices and pushes them into an “illegal” status. Xenophobia towards migrant workers is also reflected in feminist spaces, activists often go as far as blaming social ills such as the driving ban, sexual harassment, unemployment opportunities and more on migrants. This type of “blame the migrant” narrative is ever rising in these economically challenging times, making the likelihood of abolishing the kafala system and implementing institutional protections for the country’s most vulnerable migrant workers almost impossible. Until there is a more inclusive social justice movement in Saudi Arabia that extends itself to working class migrants, racist state policies and social discourse will continue to reinforce and perpetuate each other.