Migrant-Rights.org travels to the rough deserts of Kuwait, where migrants working as shepherds are subject to both the vagaries of the weather and their kafeels.

Rajayah Yenkampally, a 43-year-old native of the southern Indian state of Andhra Pradesh, is on a train home from Mumbai.

“I Landed at Mumbai airport from Kuwait today (Saturday). Still it hurts. I have 22 stitches in my head.” 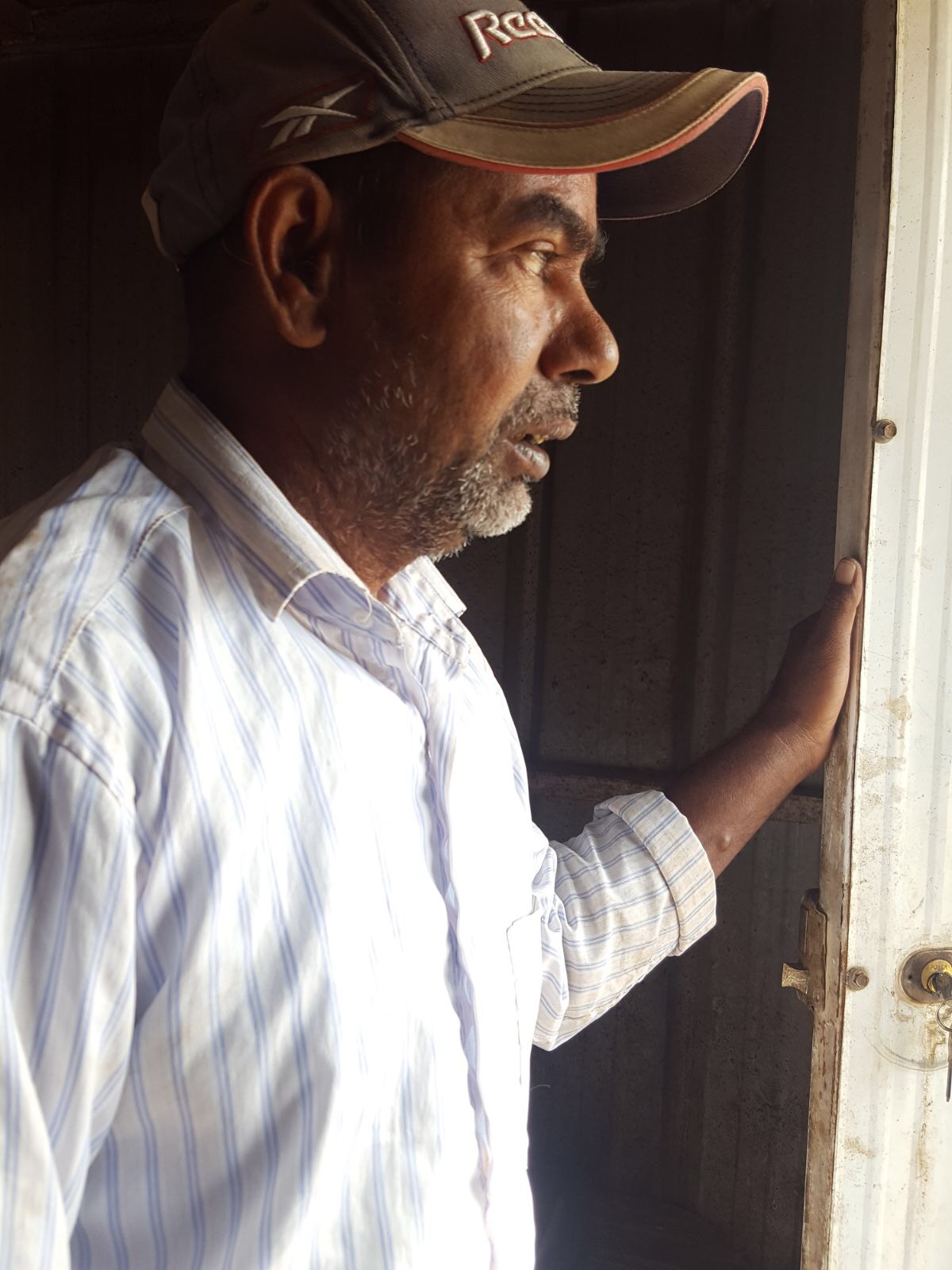 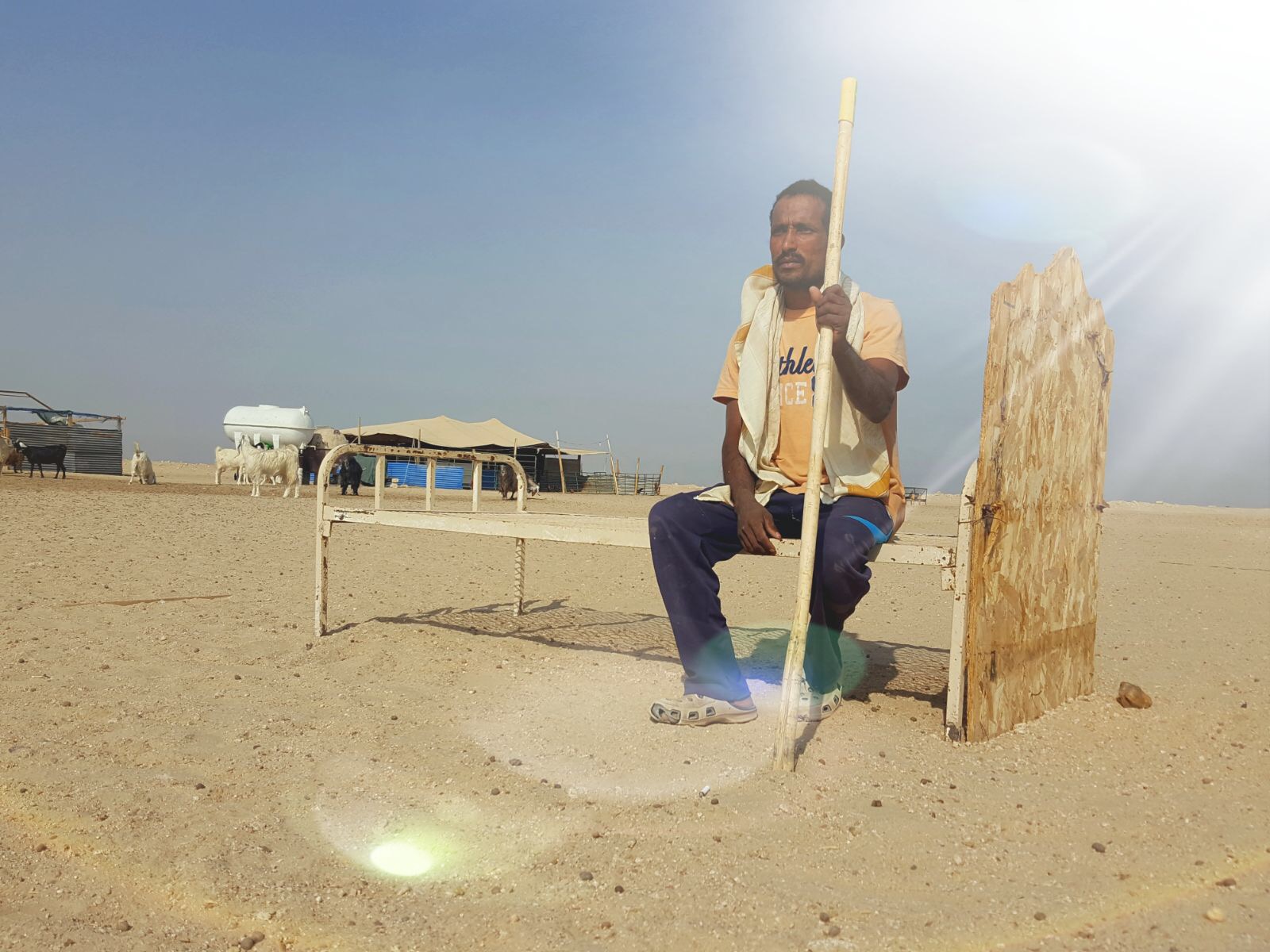 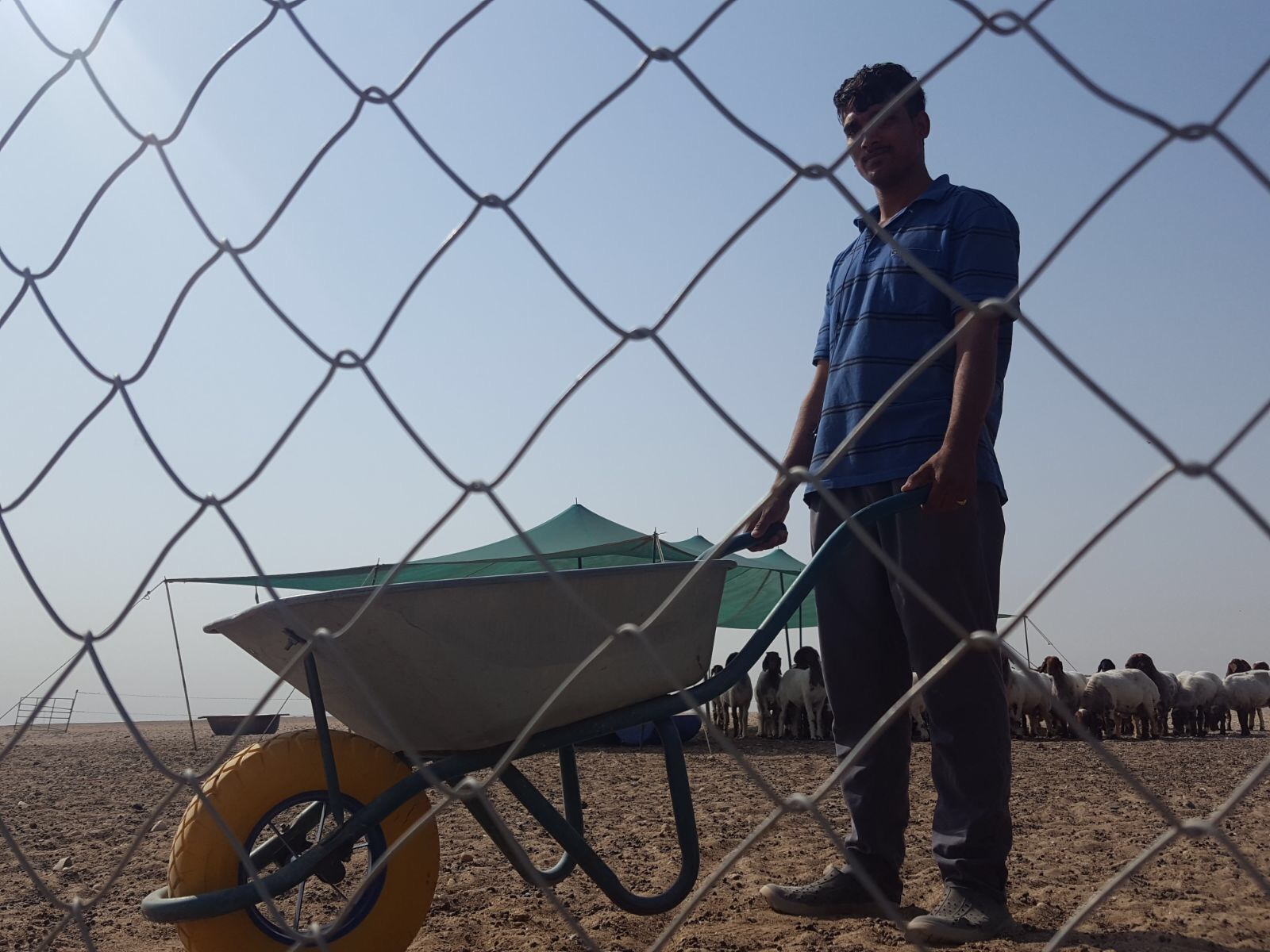 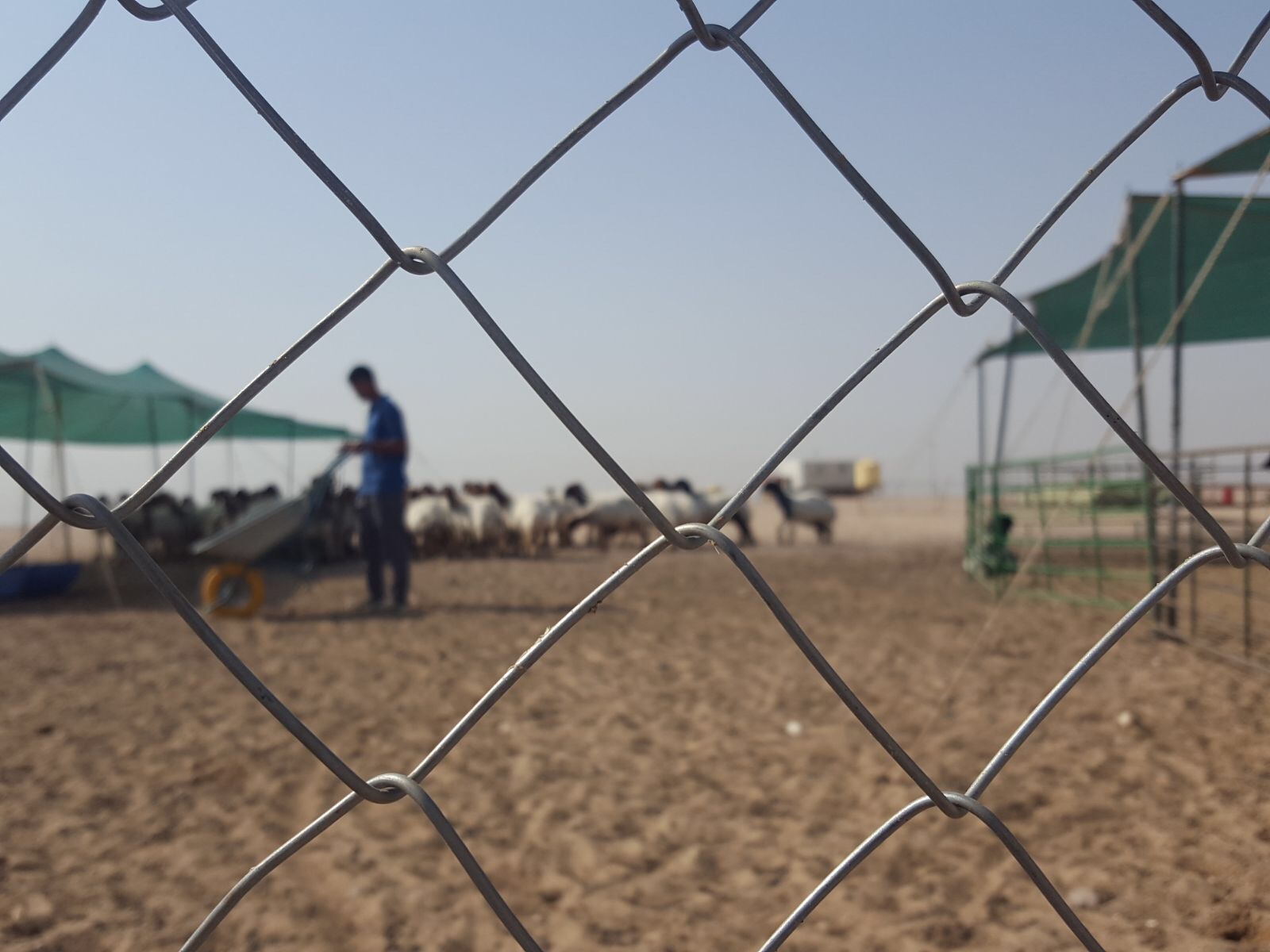 Socialising between shepherds from rival farms is frowned upon 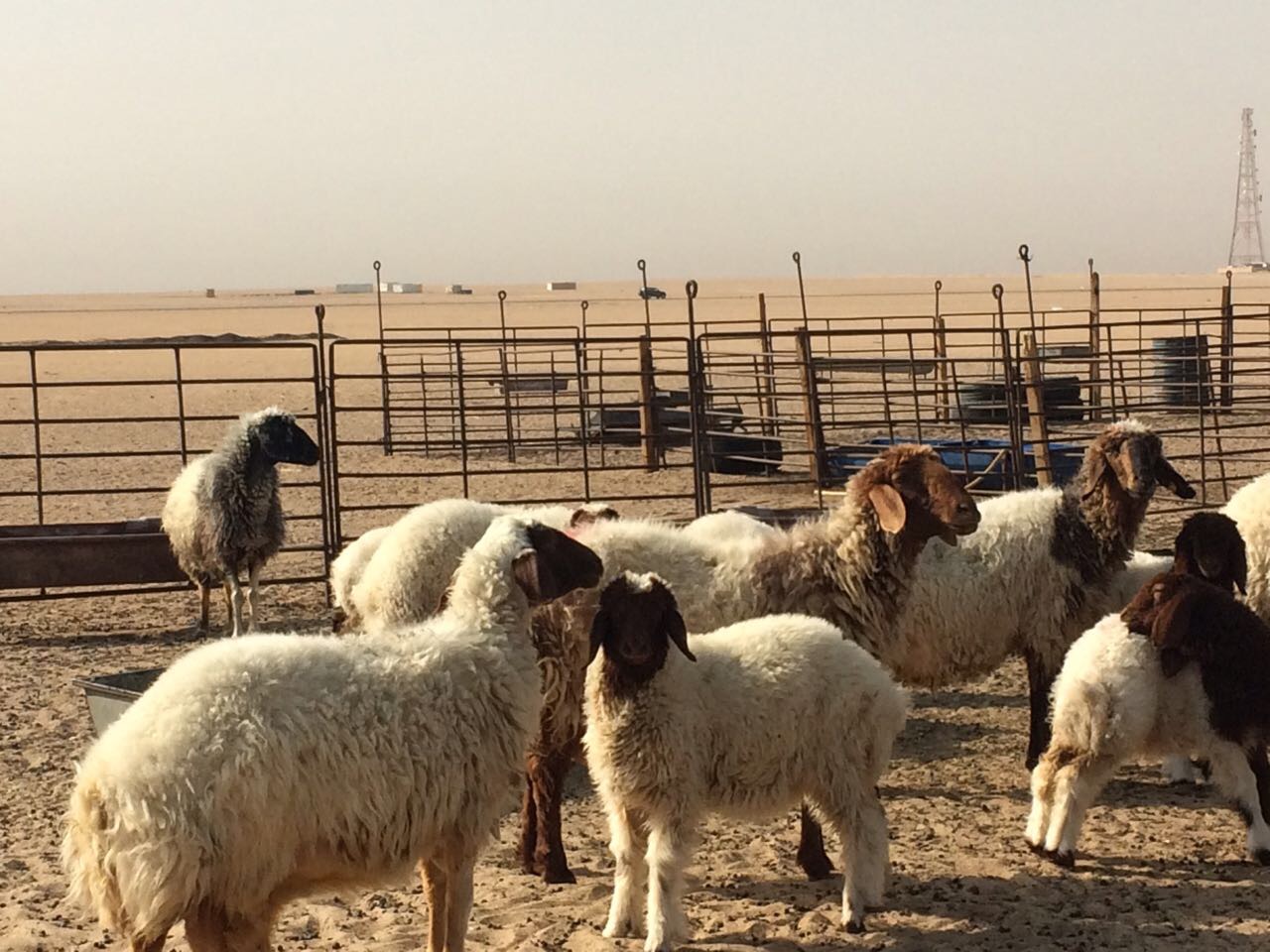 Between man and sheep, the latter carries more value 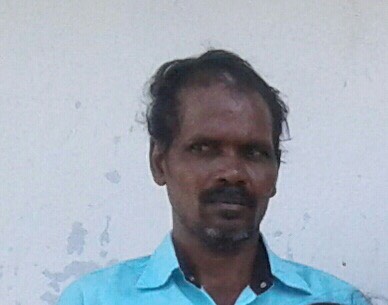 Yenkampally, who migrated to Kuwait in 2016 on a domestic worker visa, was forced to work as a shepherd in the Wafra desert on the Kuwait-Saudi border.

Though not happy looking after over 100 goats all by himself, he had little choice but to continue with the work.

Until, one day, a goat went missing and he was beaten up by his employer.

“Just one goat had gone missing... I informed the sponsor. He pushed me down and banged my head on the floor. I could taste my blood, my entire face was covered with it…I was losing consciousness too…,” Yenkampally recalls.

Yenkampally's employer took him to the hospital, but when he realized that he would be held responsible for the assault, he abandoned Yenkampally and fled the scene.

As Yenkampally's identity documents were kept by his employer, the hospital denied him advanced care.

“Helpless, I left the hospital. Due to dizziness, I was not able to walk either. Luckily, an Indian driver approached me and took me to the Indian embassy. With their help, I was again taken to the hospital and provided proper treatment.”  The Indian embassy then provided Yenkampally shelter.

“Now, in a day I will reach my hometown. I went to Kuwait with big dreams. I have three daughters. I thought of earning and saving something. But I am back with scars and pain, for no fault of mine. I have 22 stitches in my head. The doctors said that I may suffer vision loss too.”

Yenkampally's case is not an isolated one.

In mid-October, Migrants-Rights.org (MR) travelled to the desert town of Al Abdali, on the Kuwait-Iraq border, where at least half a dozen shepherd tents are scattered far from a single tarred road.

Mohammed Kasim, a 25-year-old Kashmiri from the Poonch area, and Mohammed Bilal, a 40-year-old Bangladeshi, live in tents looking after 125 goats. Both were betrayed by their agents.

Kasim and Bilal were told they would be working in Kuwaiti houses. They paid Rs65,000 (USD1,000) and 300,000 Taka (USD3,500) respectively to be brought into Kuwait on domestic workers visas. But their sponsors soon converted these into shepherds visas.

Neither Kasim nor Bilal are allowed to visit nearby tents.

“Once in awhile, he (the kafeel) comes to supply foodstuff. If he doesn’t see us here in the tent, he starts yelling. Where will we go? At the most to a nearby tent to meet the shepherds there. How long can we stay isolated in a camp? We don’t even have proper air conditioning here. The only luxury is an air cooler. And if it needs repair, we have to wait till the Arabab gets time to replace or repair it,” Bilal said.

Both Bilal and Kasim are paid around 80 Kuwaiti Dinar (USD265) per month. The employer provides food,  but they say they are denied proper medical care.

“If we fall sick, we have to inform the Arabab. He will consult a doctor and get us some medicines. Even if we are shivering due to high fever, we won’t be taken to the hospital. Medicines will be brought here,” Bilal said, adding if a goat falls sick or dies, they are held responsible.

“He will say that it’s due to our carelessness the goat died and will yell at us.”

Mirajuddin Ansar, 35, is a shepherd from the central Indian state of Uttar Pradesh.

Mirajuddin was also betrayed by his agent. He paid around Rs80,000 (USD1,230) for a domestic worker visa and ended up shepherding.

According to a Kuwait’s ministerial decision 143/A/2010, passports cannot be confiscated by the sponsor.

Additionally, a domestic worker visa cannot be converted into a shepherd visa or farm job visa. Since India officially does not approve Shepherd’s visa, they are taken on domestic worker’s visa.

According to the ILO, forced or compulsory labour is any work or service that is exacted from any person under the menace or threat of a penalty, and which the person has not entered into of his or her own free will.

The ILO states that migrant workers coerced to work through the withholding of their passports or identity documents can also be considered as forced labour.

The ILO says that the employers may be holding the workers’ identity documents for safekeeping, however, in such cases, the workers must have access at all times to the documents, and there should be no constraints on the ability of the worker to leave the enterprise.

Unfortunately, all the shepherds MR spoke to didn’t have their passports and were not sure they could have easy access to it.

In 2016, the United States classified Kuwait as a Tier 2 country in its annual Trafficking in Persons Report.

Kuwait had been classified a Tier 3 country for nine consecutive years.The latest report cites the improved rating the passing of the 2015 domestic workers law and an unprecedented number of convictions of traffickers under the 2013 anti-trafficking law.

But the report also found that Kuwait’s forced labour issues remain rampant and that victims of trafficking were still being arrested, detained, and deported.

“This is my fate. I have to face it. I may be cursed to struggle in this desert. I am alone in this tent. Sometimes, I feel scared too,” said Mirajuddin, who is in-charge of 100 goats.

After landing in Kuwait he realized he was betrayed and called his agent. But the agent didn’t give a clear answer.

“Later I found out that my father knew what my job would be. So, there was no use in fighting over that. My fate…I have to be here…”

Mirajuddin is paid only 60KD (USD200) per month.  “Once in two years, we get two months unpaid leave. We are given only a ticket, nothing else. No paid leave,” Mirajuddin said.

An official at the Indian embassy in Kuwait City told Migrant-Rights.org "we have stopped issuing clearance for shepherd visas. But still, we come across cases of Indians working as shepherds and they are being abused physically and mentally.”

“Recently, I met one Indian shepherd who has been sheltered by the local government. When I checked with my officials I was told that he is there for the last two years. I have told them to get his files and find a way to repatriate him as earliest as possible,” the official added.

The stranded worker is Arogyaswami from Tamil Nadu.

“Arogyaswami came on an electrician visa. But was sent to the desert as a shepherd. He stayed there for 15 days and ran away from there as he couldn’t withstand the torture. Since then, he was stuck in the shelter,” the social worker said.

Bheem Reddy, a migrant rights activist in Hyderabad, said that workers continue to be duped into these isolating, difficult jobs despite several awareness campaigns.

“Not only sending countries but also receiving countries should act sincerely in protecting the migrant workers and their rights will help us to find a solution to such situations."

The article is published as part of the author’s 2017-18 Panos South Asia Media Fellowship programme under the theme Forced Labour and Trafficking. The Panos fellowship is backed by International Labour Organisation (ILO), Swiss Agency for Development and Cooperation (SDC) and Ethical Journalism Network.