Though the poor living conditions of migrant workers in Kuwait’s urban areas is well-known, no effective actions have been taken to improve their circumstances. Cramped and unhygienic living spaces have accelerated community transmission of COVID-19 amongst migrant communities, undermining efforts by the authorities to contain the spread.

The Kuwait Times reported that the Ministry of Health quarantined a labour camp in Mahboula that houses around 600 workers after one person tested positive. According to reliable sources, this company compelled the workers to continue working despite government directives against doing so. Another report by Arab Times reveals that 400 food delivery workers in Fahaheel area were also quarantined.

Kuwait’s labour law requires employers to provide either accommodation or an allowance to cover accommodation expenses, but many companies sidestep this responsibility. This forces labourers to resort to the cheapest accommodations in already impoverished and saturated areas. Free visa and irregular workers are also more likely to inhabit these areas.

Mujeebur Rahman, a Bangladeshi worker who lives in the Hasawiya area, told a local lawyer, “even though the accommodation was promised, all I get is KD 20 (USD 64) accommodation allowance. I'm forced to share my room with nine other people with only one bathroom.” 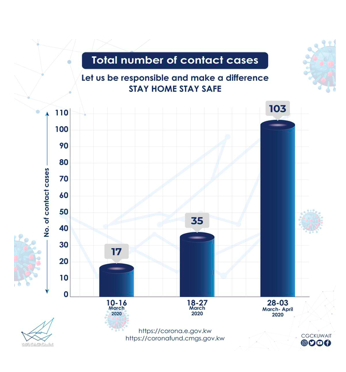 As the graph illustrates, the number of contact cases has surged alongside the increasing incidence of infection amongst migrant workers. Out of 556 total confirmed cases in Kuwait, Indians nationals account for 225.

The first death from the Indian community was reported on April 4. Around 900 people in the building in Kabd area, where the deceased lived, have been quarantined. According to sources, these workers are primarily lower-income labourers and food delivery workers.

The advice of local health authorities and the World Health Organisation is impossible for many migrant workers to implement; their accommodations are too crowded to maintain recommended physical distance, and they often lack enough soap, water, or hand sanitiser to clean their hands regularly. The video below sheds light on the reality of many low-wage workers. Living 12 to a room in a dilapidated building and neglected by their sponsors, they have lost their incomes and do not even have enough money to buy food.

The large number of migrant workers living in densely populated areas such as Jleeb, Mahboula, and Hasawiya increases the likelihood of community transmission. Unhygienic and crowded living conditions, which have been their reality for so long, make containment a serious challenge. However, discriminatory policies and xenophobic attitudes will not help combat the spread of the virus.

As Kuwaitis, we need to ask ourselves, “Do we need a pandemic to happen for us to open our eyes and see the miserable living conditions of migrant workers, and take action against the companies that contribute to their miseries?"