Several of the Gulf Cooperation Council (GCC) states launched deportation campaigns as soon as international flights resumed, and Covid-19 cases began to drop, around September of last year. Now, even as infections surge across the region, mass deportations are not only continuing but escalating. Thousands of migrant workers continue to be exposed to extreme risk in crowded, often unsanitary deportation centres.

Kuwait's Ministry of Interior recently announced that it deported 607 undocumented migrants in just the first eleven days of the new year. The country deported 18,221 irregular migrants in 2021, despite its own strict travel-entry requirements. 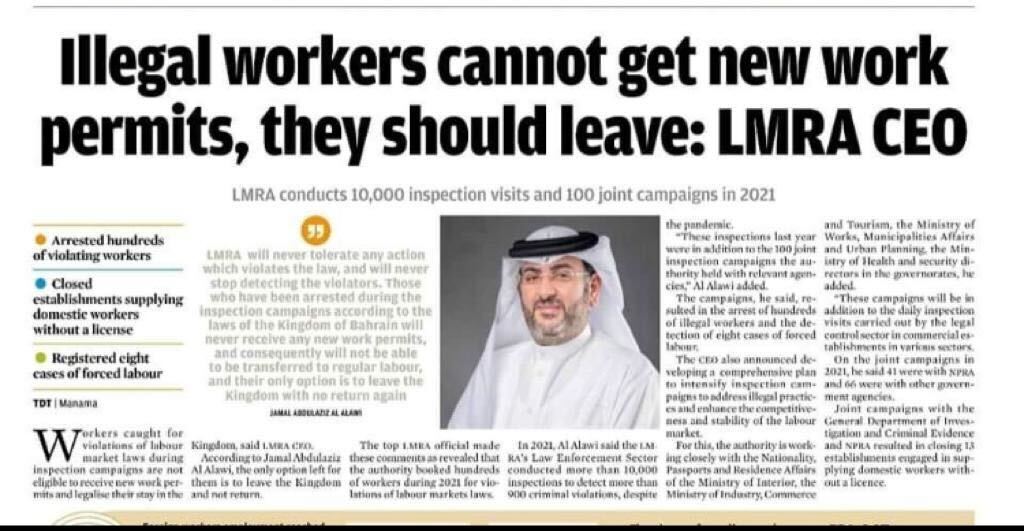 Screen shot from News of Bahrain (click to visit)

Bahrain's Labour Market Regulatory Authority (LMRA), in collaboration with the Ministry of Interior and other government entities, has overseen ongoing arrest and deportation campaigns since September of last year. The government announced that it is conducting weekly inspection campaigns across the country and has urged the public to report irregular migrants to the authorities. It is unclear how many workers exactly have been deported since the start of the raids, but the LMRA’s CEO Jamal Al-Alawi stated yesterday that it had arrested “hundreds of violating workers” since 2021.

The LMRA's CEO also stressed that the LMRA is not "lenient" in enforcing the law, adding that those caught will not be allowed to obtain a new work permit and will be deported with "no return to the Kingdom." This statement demonstrates a shift in discourse and policy in Bahrain — previously,  irregular migrant workers arrested by authorities were given the option to regularize their status through the Flexi-Permit scheme.

As MR previously reported, Saudi Arabia has deported tens of thousands of migrant workers since the Covid-19 outbreak began. Among those deported were the thousands of ethnic Tigrayans who faced mistreatment by Ethiopian authorities upon their return to Ethiopia. Saudi Arabia has recently also intensified its deportation campaigns: the Ministry of Interior stated that from 13 January 2022 to 19 January 2022, it arrested around 13,780 irregular migrants in various regions across the country. The Ministry also stated that there are currently more than 95,650 irregular migrants detained and awaiting deportation. Saudi detention centres are notoriously overcrowded, and their pitiable conditions expose detainees to significant health risks, even outside of pandemic circumstances.

The UAE also deported thousands of undocumented migrant workers over the last several months. Many of these deportees were African workers with valid residency status, who were racially profiled and detained arbitrarily for months for no plausible reason. No workers’ case was indvidually reviewed, meaning some were forcibly returned despite credible threats of violence in their home countries.  Detainees not only described the prison’s foul conditions, but allege that authorities falsified negative Covid-19 tests to facilitate their deportations. As many of the deportees were actively, and legally, working, many reported losing out on unpaid wages as well as their savings.

The Gulf countries are currently experiencing a record number of Covid-19 cases.

International human rights standards stipulate that migrants should only be detained for their legal status as a last resort. The risk of Covid-19 transmissions further underscores the need for alternatives to detention.

In Oman, weekly deportations were carried out even during an extended amnesty program that ran from October 2020 to December 2021. While the grace period has allowed tens of thousands of migrant workers to return home, it has been difficult for many to access due to lack of funds for tickets home and the necessary paperwork, including new passports to replace those confiscated by employers. The amnesty process also had no mechanism to address rampant wage theft and trafficking complaints, leaving many to return home without due justice.

Qatar is also currently running an amnesty to correct the legal status of those who have overstayed. Originally, the amnesty was from September to December, but has since been extended to 31 March 2022. Workers may regularize their status or leave the country, and the MoI stated that a 50% discount on fines would be extended to those in violation of residency laws. However,  some details of the amnesty process remain unclear — for example, whether or not domestic workers are able to avail of regularisation, or if they can only exit without penalty and return home.

The grace period for legalizing the status of violators of the Residence Law allows to issue and renew the Residence Permit by the same employer or transfer it from one employer to another before March 31, 2022, with a 50% discount on the violation amount. #MoIQatar pic.twitter.com/oaS9X2ExvM

The majority of migrant workers in the Gulf become undocumented due to no fault of their own. The Gulf’s Kafala system ties migrant workers’ residency to their employer, so that the moment they leave or lose their jobs — due to wage theft, abuse, or any reason at all — they become irregular.  Detained workers most often have no recourse to an individual review of their circumstances, meaning they not only have no opportunity to defend their case, but also often lose out on any owed wages. Migrants can be detained indefinitely until resources are procured for their return tickets.

This issue was acknowledged by Bahrain LMRA’s corporate communication manager Waheed Al Balushi, who in 2010 stated that “we now use the term irregular workers instead of illegal workers because it puts a criminal label on them... Not all of these workers are intentionally here illegally, since their employer could have not renewed their visa.” Nonetheless, the LMRA  continues to use the term “illegal” and deport irregular migrant workers.

Deportation campaigns commonly take place following a period of crisis in the region. The Gulf temporary migration regime exists precisely “to easily dispose of a workforce when it is no longer needed or wanted”, effectively displacing economic and health crises onto poorer sending countries.

Migrant-Rights urges the GCC states to immediately stop their deportation campaigns and allow migrant workers to regularize their status. The situation has become even more urgent with the dramatic rise in Covid-19 cases in recent weeks.