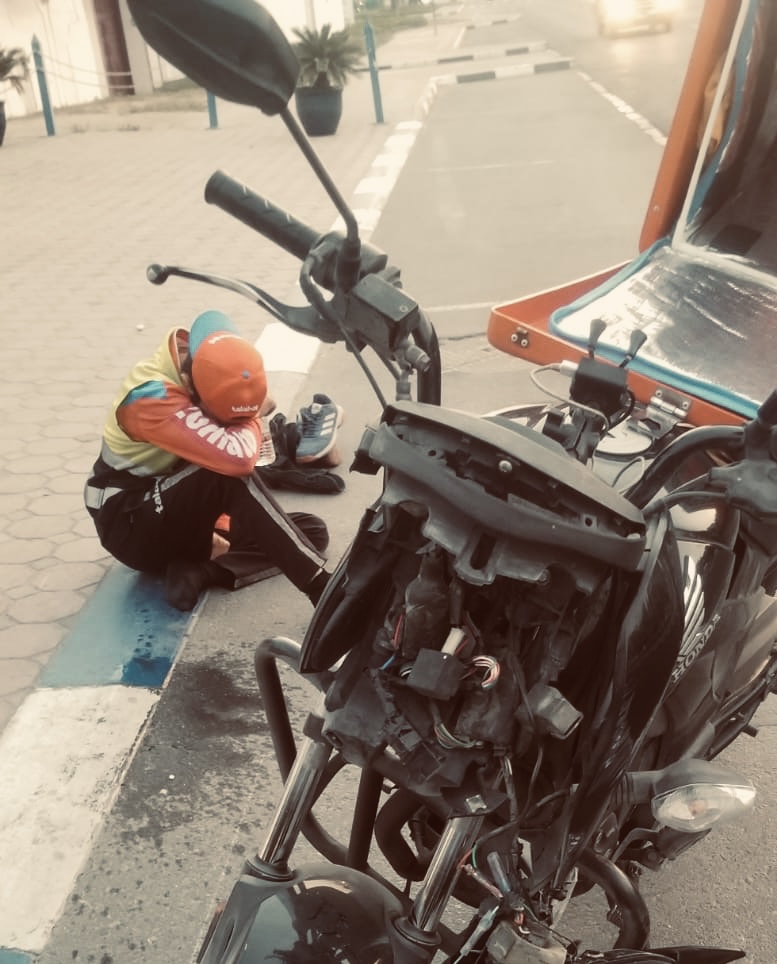 The UAE’s second protest in less than two weeks has drawn attention to the dangerous and exploitative terms of employment in the gig economy, and of food delivery riders in particular. Talabat riders have staged the most recent protest, demanding better terms of employment in a Dubai-wide strike that began at 7 PM on 9 May.

“I have gotten into two accidents in the past 10 days. I was bruised in both and also fined in one,” says a Talabat rider taking part in the strike.

These rare acts of public protest in the UAE – where demonstrations, unionisation, strikes, and any kind of unauthorised civil society activity is illegal  – is evidence of growing frustration among the riders.

Last week, Deliveroo riders stopped picking up orders after the company announced plans to reduce the payment riders receive per delivery, from Dh10.25 to Dh8.75 (US$2.79 to US$2.38). The riders received an email informing them of the wage cuts on 28 April, and stopped working in protest at 6 pm on 30 April.

Following widespread coverage and an out pour of support of the protests on social media, Deliveroo has since scrapped the plans to cut wages and released a statement to The National that says it is investigating “claims made against rider agencies breaking the law”.

Ahmed* is one of the many Dubai-based Deliveroo riders who documented the strike on TikTok. Alongside footage of the protests, Ahmed posted a graphic video of a rider who had died on the spot in a road accident last year with text including “Respect Riders” and “Shame on Deliveroo, 8.75 is not acceptable”.

The UK-based app has a presence in 12 countries. Unlike its operations in Europe, Deliveroo’s Dubai operations do not directly contract or employ any riders but partners with third-party agencies, which employ the riders themselves. Deliveroo has a limited relationship with the riders and is only responsible for paying them a per delivery fee. This is similar to how ride-share apps like Uber and Careem operate, which also have exploitative terms of employment as Migrant-Rights.Org has previously reported.

Other food delivery apps, like Talabat, have a similar relationship – or lack thereof – with its riders. Talabat pays its riders AED 7.5 per delivery.

“We have no direct contact with Deliveroo as such. They are not at all involved or even interested in what we go through as long as we are doing our job,” says Ahmed. “They only discussed the wage cut with the agencies who complied, and just informed us of this one-sided decision.”

According to Deliveroo’s website, a rider must be sponsored by a rider agency partnered with Deliveroo, provide valid proof of their right-to-work and insurance coverage documents in the UAE, hold a valid motorbike driving licence, and be over 18. As employees of the agencies, riders fall under the scope of the labour law, and agencies are legally obligated to provide them with a work visa, health insurance, on-time payments, and other benefits. In practice, however, many riders end up paying for their own visas and lack the rights — such as paid overtime —  they are entitled to under the law.

“And we have to pay for our own petrol, any fines we may incur, and then for accommodation, food, and everything else you can think of. We are left with nothing,” he says. “Also, so many of us are paying for our own visas which have cost thousands, and are risking our lives trying to drive as fast as we can to maximise our orders.” Riders have to navigate penalties for late deliveries and the UAE’s costly speeding fines, which can start at AED 3000 (US$800).

“The agents don’t provide anything except bike rental charges, which are around AED 500, and maybe a sim card or something,” says Ahmed. They don’t spend more than AED 600 per month on a rider. All the other costs are incurred by us ourselves. And Deliveroo, or any of the other apps, just turn a blind eye as long as they make millions.”

Two sources have confirmed that agencies they have worked with are paid AED13 (US$3.54) per order, but also say that Deliveroo’s contracts with agencies differ based on several factors. Deliveroo charges an onboarding fee for restaurants to register on the app, and also charges up to 35% commission per order.

Migrant-Rights.org reached out to four agencies, three of which declined to comment. An employee of one agency said that they follow all UAE labour laws and riders sometimes “lie” to get more tips.

“I think nobody should get into work where you are not an employer for a company directly. So these huge companies have some responsibilities. The little agencies they work with are run by crooks and are nonsense,” says Ahmed. “Even large companies exploit workers, but there is still more hope with them, I think. I miss my job in labour, but now my health isn’t good enough for that type of work.”

Ahmed says the agencies are recruiting from new source countries, and convincing potential riders to pay large sums of money for a visa with the promise that they would earn thousands working for apps like Deliveroo and others like Zomato, Talabat, Noon, Uber Eats, and Careem Now.

“There are so many rider agencies. Some older riders have even become agents themselves now and are making a lot of money.”

Though the demand was met fairly quickly and without any negative consequences for those who went on strike so far, Ahmed thinks getting into this work was one of the worst decisions of his life.

“I used to work as a labourer before. I saved money and got a bike licence to get into this work,” he says. “You would find Tiktoks of how riders make AED7000 (US$900) or more a month, but I got my licence and started working and realised that this was the biggest mistake of my life.”

The Tiktoks were posted by other riders working for food delivery apps in the UAE — it’s  not unusual for new migrants with a large social media following to sometimes share an airbrushed exaggerated version of their life reality and work on social media, especially for the audience back home.

Though online food delivery services have been growing for years, demand has skyrocketed since the coronavirus outbreak. Online sales within the UAE’s food and beverage market surged 255% year-over-year in 2020 to reach $412 million, according to a Dubai Chamber analysis. During 2019/20, Deliveroo generated Dh 861 million ($234 million) in revenue for the UAE economy.

In a statement to Migrant-Rights.org, Deliveroo said it intends to continue working with rider agencies in a “structure “that works for everyone”.

“Our initial intention with the announcement was to propose a more well-rounded earnings structure for agencies to engage with riders in addition to other incentives. Having paused all changes, we will engage with the agency riders we engage with to ensure we have a structure that works for everyone and has our agency riders’ best interest at heart, which has always been our objective.”

Riaz, another Deliveroo rider who shared videos from the strike on his Instagram, explains how the strike was organised.

“Many riders usually gather around cloud kitchens because a lot of deliveries are from them. We started talking there and then communicated it with other riders we know personally who were not around,” he says. “This is how the news spread, and even those who hadn’t heard of the strike for some reason before realised it was happening when we started posting about it.”

The strike lasted for over a day, ending when riders received an email confirming that the decision to reduce their payment rates was scrapped.

“A few people on Twitter started supporting us and demanding we get justice. That was really nice. I think maybe more would have shared but were scared. I don’t know why though. We weren’t saying anything wrong.

Defamation is a criminal offence in the UAE and, when occurring on social media, falls under a strict Cybercrime law.  The local press often holds back on reporting on stories because companies or individuals may sue them if they deem them “insulting to their honour.”

Fear of defamation accusations is likely why all media coverage of the strike in the local press only took place when Deliveroo issued an official statement.

Ahmed, just like Riaz, says that he has little knowledge of UAE’s defamation laws but has not been worried

“It was a peaceful demand for justice. Nobody was being violent or aggressive, we just refused to work,” says Ahmed. “This is why we didn’t fear any consequences. We were doing nothing wrong.”

Striking workers have been deported by the UAE in the past.

Ahmed says that one of his biggest concerns as a rider is a lack of access to healthcare.

Road accidents are extremely common amongst riders. Agents cover bike insurance, but health insurance is covered by riders themselves, and usually has very little coverage.

“We pay for our own insurance, it costs between AED 600 to 1000 (US$170-270), but that covers nothing. When we go to a hospital after an accident with this insurance, thinking we have a right to be here, they laugh at us.”

According to data released by the Dubai Police, 22 people were killed and 253 injured in road accidents involving motorcycles in 2020. In the first two months of  2022, the police’s traffic department recorded 46 accidents that caused three deaths and 47 injuries.

Ahmed worries that the rate of accidents is going to increase in the coming months.

“Every rider who has died in an accident was someone not very experienced,” he says. Although MR was not able to verify these claims, Ahmed explains that increasingly, agencies are encouraging riders to get licences from other emirates, where they are a lot easier to obtain than in Dubai.

“Many don’t know how to ride properly but have a licence. And they will ride as fast as they have to so that they can get enough orders in a day. This isn’t just about workers wanting more money, this is about people wanting to not die for 10 dirhams.”

In response to MR’s queries about worker safety, a spokesperson for Deliveroo stated, “We work closely with the other delivery aggregators and the RTA in Dubai and our other transport authorities in the other Emirates to ensure we are doing everything we can for rider safety.”

“This includes collaboratively working on developing better rider safety kit such as helmets, knee pads, safety gloves. […] Our onboarding training is comprehensive and safety focused, including safety videos from both Deliveroo and Dubai Police.”

MR also spoke to a group of riders who stood on the side of a road while on strike. Most stated that they were overworked and underpaid, and often put their own lives at risk on the job because of lack of road safety and heat stress. They also expressed that most of these problems stem from the work model, where the app assumes no responsibility for their working conditions.  Four of the seven workers on the strike had paid their own visa, five had been in an accident before.