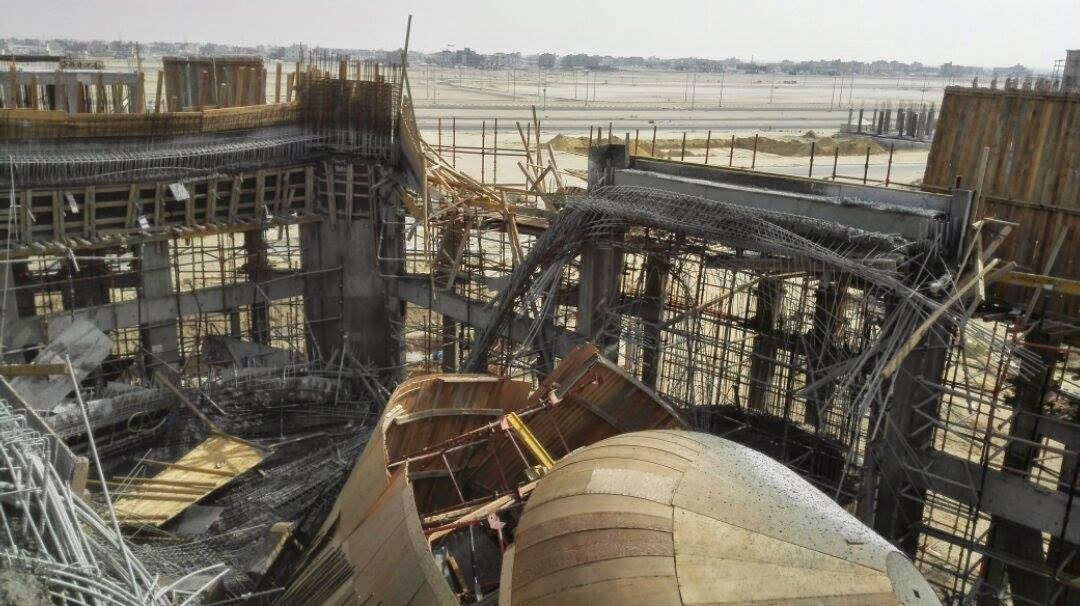 Construction workers in Kuwait are building its future in hazardous and exploitative work sites.

Kuwait's estimated 186,000 constructions workers account for 17% of the migrant workforce, not including the thousands of undocumented migrants working in the industry. The majority of construction workers come from Egypt and South Asian countries. They live in construction sites or in the slums of Hassawi, Farwaniya, and Khaitan, where they are closely surveilled and denied reasonable access to public services.

Many of these workers have paid large sums to come to Kuwait, entangling themselves in debt for the promise of decent job. Adel alGharib told Arab Times he paid KD 1600 ($5304) to obtain a working visa only to spend his first 7 months in Kuwait without a job. Migrants might purchase these blackmarket visas from middlemen, unaware of their illegality, or not entirely informed of their consequences.  Adel alGharib said that while he possesses a diploma certificate in manufacturing, he had little choice but to accept an ‘unskilled’ construction job. He shares a room with five other workmates and sees no prospect of returning home without recovering the money he spent to work in Kuwait.

Industry corruption accounts in part for the frequency of exploitation.  Many state-contracted companies constructing new residential areas and universities are recurrently accused of corruption, including overextending project timelines and using cheap materials to save on production costs. This can mean putting workers at risk, as they work in dangerous environments without the proper safety equipment. Many construction projects, especially houses and residential buildings, fail to provide laborers with necessary technical support. In 2014 alone, Kuwait’s Fire department reported 48 cases of collapsed buildings.

In April, an Egyptian worker fell from a building under construction in the al-Riqqa area. He was declared dead on arrival at al-Farwaniyah hospital. In March, two Egyptian workers were killed and other workers sustained serious injuries when a mosque under construction collapsed. The Sabah al-Ahmed mosque is part of a large state-funded project contracted to the al-Enmaa real estate company. An eyewitness told Migrant-Rights.org:

“It was the mistake of the contractor for purchasing a lower-quality of construction materials. It is also the responsibility of the engineer for not securing all safety measures. I saw one of the killed workers before his death; he had spent three hours under ruins before firemen were able to get him out but he died shortly after that. Right after the incident, the management tried to blame the engineer, who is Egyptian, and threatened him with deportation. He will mostly be the one to take the legal blame for this collapse.” Al-Watan posted an aerial video shot of the damage. In February 2014, one mosque under construction in Omariya area caused injuries to 11 construction workers, four of them were severe. No official comments or press updates were published on the investigation of these incidents.

The most infamous incident involved a landslide at the Shaddadiya campus that buried two Egyptian workers in an 8-metre deep hole. Kuwait’s education minister at the time, Ahmed al-Mulaifi, resigned following the incident.

In September 2014, a South Asian man in his 30s also died at the university construction site. In 2013, another South Asian worker was killed at the Shaddadiya campus when a heavy equipment vehicle fell on him. The last reported death of this campus was in January 2015, when a worker fell in a 3-meter deep hole.

In March, two Egyptian workers, 33 and 38 of age, were killed and three others severely injured while working on the seventh floor of a commercial building. Preliminary investigations indicated a ladder caused partial collapse of the building. One of the two died on the scene while the other sustained injuries to his head and hands that caused his death after arriving at the hospital. Police searched for some of construction workers who had escaped during the incident, presumably to find better work. A spokesman of the fire department said the contractor is responsible for ensuring safety measures at the working site. In December 2013, two Indian workers were killed when a wall collapsed on them at a state-run renovation project. The Sheikh Khaza’al House is over a 100 years-old and considered one of the country’s national heritage sites. Kuwait’s Secretary General of National Council for Culture, Arts and Letters Ali Al-Youha said the renovation work will continue despite the deaths as “it is a predestined incident.” Such statements are used to conceal the culpability of contractors, and by extension the state that vets the contractors, of ensuring safe working environments.  See here for a video report on the Khaza’al house collapse.

One 2010 study revealed that the construction industry is “Kuwait most hazardous industry.” An average of 83% of victims of construction accidents in Kuwait sustain permanent disabilities. The study explains that falls are the most frequent type of accident in this industry accounting for 33% of deaths, followed by being crushed or struck by a falling object (25%). Use or misuse of tools caused the third largest number of accidents in Kuwait (18%). The study also notes that the most frequent type of injury is fractures (53%) and the most commonly injured body part is the upper body (53%).